The Olive Garden logo is seen at the restaurant near Bloomsburg, Pennsylvania. (Photo by Paul Weaver/SOPA Images/LightRocket via Getty Images)

Claim:
A manager at an Olive Garden restaurant was fired after sending employees a stern message about not showing up to work.
Rating:

On Dec. 6, 2022, a Reddit user posted on the r/antiwork subreddit a screenshot of a purported "mass email" rant from a manager at an Olive Garden restaurant. The subject of the letter was about employees who had apparently repeatedly "called off" with various excuses for why they were unable to show up for work. "If your dog died, you need to bring him in and prove it to us," the letter read. "If it's a 'family emergency' and you can't say, too bad. Go work somewhere else."

We contacted Darden Restaurants, Olive Garden's parent company, to find out more details. By email, company spokesperson Rich Jeffers confirmed that the letter was real and provided the following statement: "We strive to provide a caring and respectful work environment for our team members. This message is not aligned with our company's values. We can confirm we have parted ways with this manager."

According to KCTV5.com, the specific Olive Garden location where the fired manager had worked was on 95th Street in Overland Park, Kansas. The TV station's article posted the full letter:

Our call offs are occurring at a staggering rate. From now on, if you call off, you might as well go out and look for another job. We are no longer tolerating ANY excuse for calling off. If you're sick, you need to come prove it to us. If your dog died, you need to bring him in and prove it to us. If its a "family emergency" and you can't say, too bad. Go work somewhere else. If you only want morning shifts, too bad go work at a bank. If anyone from here on out calls out more than ONCE in the next 30 days you will not have a job. Do you know in my 11.5 years at Darden how many days I called off? Zero. I came in sick. I got in a wreck literally on my to work one time, airbags went off and my car was totaled, but you know what, I made it to work, ON TIME! There are no more excuses. Us, collectively as a management team have had enough. If you don't want to work here, don't. It's as simple as that. If you're here and want to work, then work. No more complainging about not being cut or not being able to leave early. You're in the restaurant business. Do you think I want to be here until midnight on Friday and Saturday? No. I'd much rather be at home with my husband and dog, going to the movies or seeing family. But I don't, I'm dedicated to being here. As should you. No more excuses or complaints.

I hope you choose to continue to work here and I think we (management) make it as easy as we can on ya'll. Thank you for your time and thank you to those who come in every day on time and work hard. I wish there were more like you.

As of Dec. 7, the Reddit post that showed a screenshot of the letter had received nearly 34,000 points. For readers who are unfamiliar with Reddit, this large amount of points meant that the post was voted by users to be very popular. 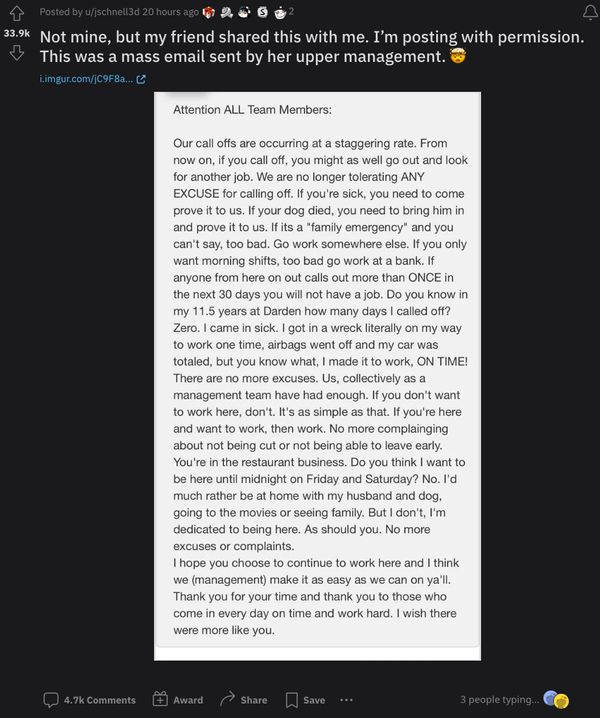 Note: The r/antiwork forum on Reddit was described as follows: "A subreddit for those who want to end work, are curious about ending work, want to get the most out of a work-free life, want more information on anti-work ideas and want personal help with their own jobs/work-related struggles."

jschnell3d. "Not Mine, but My Friend Shared This with Me. I'm Posting with Permission. This Was a Mass Email Sent by Her Upper Management. ????." r/antiwork via Reddit.com, 6 Dec. 2022, www.reddit.com/r/antiwork/comments/zekbi2/not_mine_but_my_friend_shared_this_with_me_im/.