The restaurant chain Olive Garden found itself in the middle of a media spat following the U.S. Capitol riot. 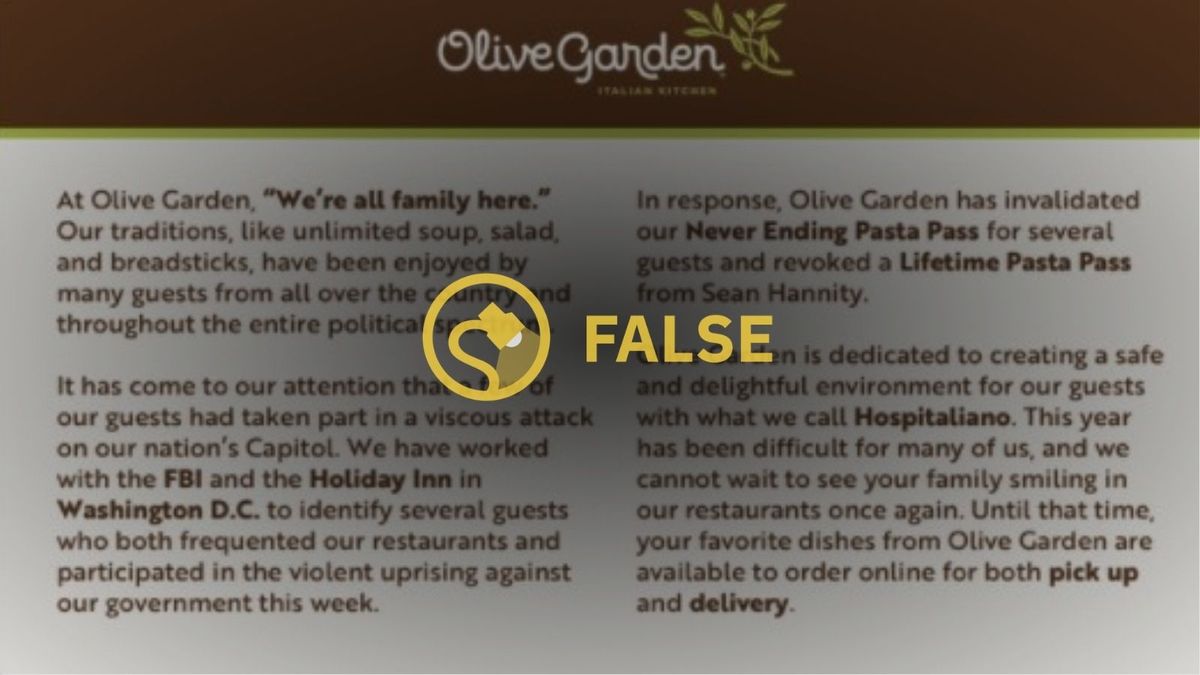 On Jan. 6, 2021, a pro-Trump mob stormed the U.S. Capitol. While the country dealt with the very real consequences of that event — five people died, property was damaged, dozens were arrested, and lawmakers discussed the possibility of invoking the 25th amendment to remove the president of the United States, who they alleged incited the violence — an odd controversy hit the airwaves of Fox News: CNN's Anderson Cooper had made a seemingly disparaging comment about the Olive Garden.

Cooper was covering the Capitol riot on CNN when he noted that many of the people in attendance were proud of their "unconstitutional behavior" and that they would likely celebrate the fact that they had just desecrated the Capitol. Cooper said (transcript via NY Post):

Look at them, they’re high-fiving each other for this deplorable display of completely unpatriotic, completely against law and order, completely unconstitutional behavior, it’s stunning ... And they’re going to go back to the Olive Garden and to the Holiday Inn they’re staying at, or the Garden Marriott, and they’re going to have some drinks and talk about the great day they had in Washington … They stood up for nothing other than mayhem.

Cooper's comment appeared to have struck a chord with Fox News. Not his remarks about this mob's unconstitutional and dangerous actions, but the insinuation that they might dine at the Olive Garden. Fox News mentioned Cooper's Olive Garden comment at least seven times in the days following: twice on Shannon Bream's show, twice on Hannity's program, and once on "Tucker Carlson Tonight," "The Five," and "Fox and Friends." This comment was also discussed on the Fox Business Channel shows "Kennedy" and "Varney and Company." While Hannity and other Fox News hosts debated the merits of Coopers' comment, several news articles were published about people who had lost their jobs for attending this pro-Trump riot. So when a statement supposedly issued by Olive Garden started circulating on social media in which the restaurant chain announced that they were revoking Hannity's "Lifetime Pasta Pass," many people found it plausible. This is not a genuine statement from the Olive Garden.

This statement was created as a joke by Louie Mantia Jr. The original post has since been deleted and Mantia posted a follow-up thread to clarify that the statement was fake:

Mantia explained in the thread that he wanted to comment on how companies are often unnecessarily dragged into controversies surrounding current events. After a can of Axe body spray was found at the Capitol, for instance, Axe released a statement condemning the violence:

Mantia said that he penned this "fictional statement from Olive Garden" as a joke, but that his tweet quickly started going viral and people unfamiliar with his humor mistook it as real.

Posting to your own timeline for an audience that is familiar with you is one thing. However, when it leaves your network through retweets and quote tweets, the context is lost instantly. People were retweeting and quote tweeting faster than I could keep up with.

People joke that social media managers have a rough time when something like this happens. I know that to be true, and I didn’t consider that aspect seriously enough. Nor did I consider that my verified badge on Twitter would lend credence to something as stupid as this.

When my dumb joke about revoking Pasta Passes is believed to be true by *actual journalists* and causes *actual stress* for people who now have to deal with my joke, I think it becomes not *just* a joke. So, I deleted the original tweet.