Did Officers Rescue Own Children During Uvalde School Shooting?

A number of rumors came out of the tragic shooting at Robb Elementary School in Uvalde, Texas, which left 19 children and two adults dead. 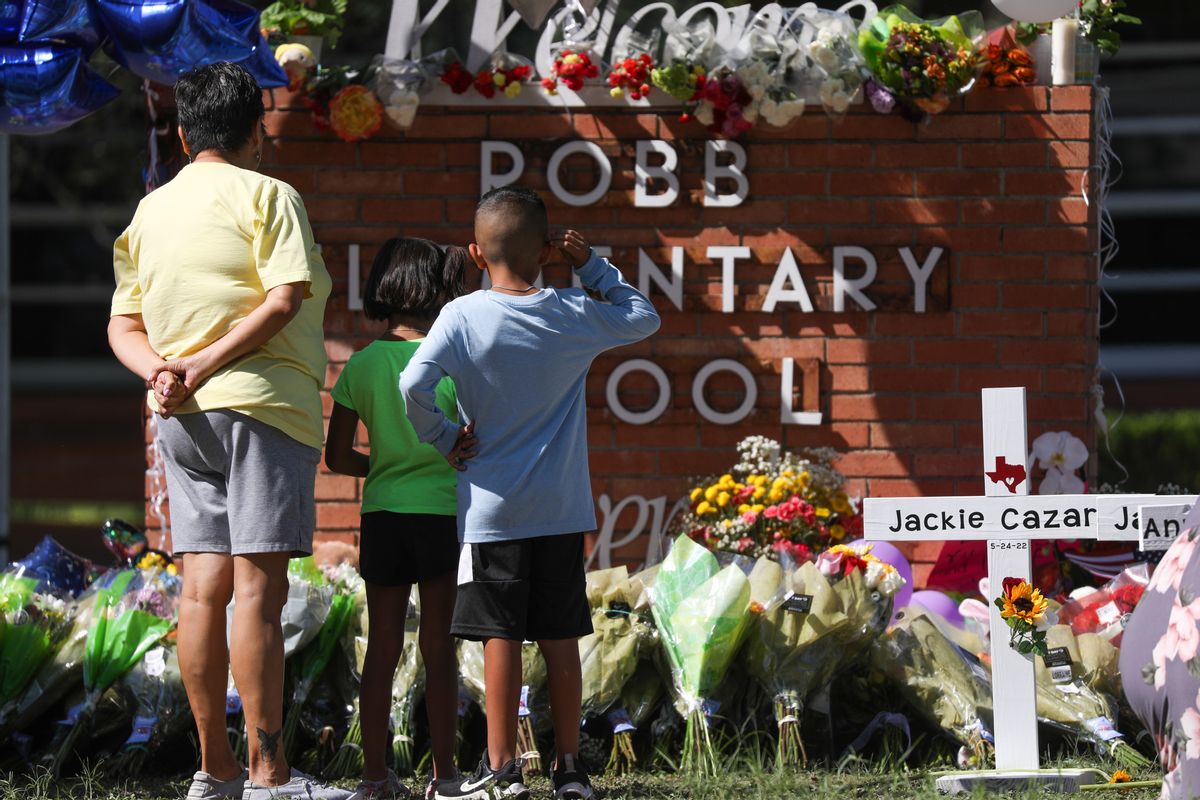 Claim:
Some 91 minutes before stopping the shooter, one or more law enforcement officers went inside Robb Elementary School and rescued their own children.
Rating:

This rumor came from a viral tweet. It's true that Jacob Albarado, an off-duty Border Patrol officer, helped to evacuate his daughter and several other children. He did so with the assistance of other officers. This happened prior to the moment when officers confronted the shooter. However, in total, the shooter was in the school for around 77 minutes, making the "91 minutes" part of the tweet incorrect.

On May 26, 2022, racial justice activist Shaun King tweeted that one or more law enforcement officers rescued their own children on the day of the deadly mass shooting at Robb Elementary School in Uvalde, Texas, while the incident was unfolding. And that was "91 minutes" before the shooter, Salvador Ramos, was stopped, the tweet alleged.

The Associated Press initially published an exhaustive article that provided a partial timeline of what local officials say happened at the school that day, a day in which 19 children and two adults were tragically killed.

It's true that, before law enforcement confronted the shooter in a classroom, an off-duty Border Patrol officer rescued his own daughter and other children with the assistance of other members of the law-enforcement community. However, surveillance footage released more than one month after the shooting showed that part of King's tweet was incorrect. King claimed the shooter was stopped 91 minutes after one or more officers rescued their own children. This was not possible, as the shooter was inside the school for around 77 minutes total, the footage showed.

When this rumor first started making the rounds on Twitter, one user asked King about his tweet, saying, "Where was this written?" Another person responded with a tweet that contained a video. That clip was quickly on track to be viewed more than 1 million times from that one upload. (It was downloaded and uploaded again by other Twitter users.)

The video came from the San Antonio-based local news station KENS 5. In the clip, KENS 5's Vanessa Croix interviewed Lt. Christopher Olivarez, a spokesperson for the Texas Department of Public Safety. It was aired live on the evening of May 24, hours after the shooting.

KENS 5 posted the interview to its own YouTube channel. The part pertinent to this subject begins at the 1:34 mark in the video:

The transcript of the relevant question and answer has been transcribed below:

Vanessa Croix: We've heard that some law enforcement officers actually went into [the] school to get their kids out. Can you talk about that?

Lt. Christopher Olivarez: Right, so what we do know Vanessa right now that there was some police officers [and] families trying to get their children out of the school because it was an active shooter situation right now. It's a terrible situation right now. And, of course, just as we mentioned the loss of life, it's just terrible, it's a terrible tragedy now that took place, but again we've got to keep acknowledging those brave men and women that actually were there on scene that met the suspect, and of course, we know that they were met with gunfire. Some of them were shot. But at the end of this, the suspect was shot and is now deceased. The threat is now neutralized.

We reached out to the Texas Department of Public Safety by email, submitting several questions in an attempt to find the facts behind the matter.

Also on May 26, The New York Times published a story that told of an off-duty Border Patrol officer named Jacob Albarado. According to the reporting, Albarado was just sitting down for a haircut when he received a text message from his wife, Trisha, a fourth-grade teacher at the school. The couple had a second-grade daughter who was also inside the school:

Mr. Albarado flew out of the barbershop and sped to the school. His wife and the children she taught were hiding under desks and behind curtains. Their daughter, a second grader at Robb, was locked in a bathroom, she had told him. He borrowed a shotgun from the barber, who had come with him.

Once he got to the school, he learned that a tactical team was already forming to enter the wing where the gunman was holed up.

So Mr. Albarado quickly made a plan with other officers at the scene: evacuate as many children as possible. “I’m looking for my daughter, but I also know what wing she’s in,” he said, “so I start clearing all the classes in her wing.”

Two officers provided cover, guns drawn, he said, and two others guided the children out on the sidewalk. “They were just all hysterical, of course,” he said. When he finally saw his 8-year-old daughter, Jayda, he said, he hugged her, but then kept moving the other children along.

On May 27, Texas Department of Public Safety Director Steven McCraw spoke at a news conference in front of Robb Elementary School, making a statement and taking questions. The Associated Press published a story with new details from the remarks that were made.

During the news conference, McCraw was asked, "Did any police officers go in to get their own kids while the parents were outside?" McCraw responded only with, "Not that I'm aware of." (It was reported by a major news organization that McCraw answered by saying "No," which was somewhat different than McCraw's real answer, "Not that I'm aware of.")

The question asked to McCraw about "while the parents were outside" referred to the Wall Street Journal's reporting that said, as the incident unfolded, parents outside of Robb Elementary said they were "tackled," placed into "handcuffs," and "pepper-sprayed," all while they were "encouraging" the "police and other law enforcement to enter the school." We also inquired with the Texas Department of Public Safety about this, but have yet to receive a response.

The brief question and answer can be watched in the video below beginning at the 39:00 mark:

On July 12, 2022, surveillance footage from inside the school in Uvalde was obtained and published by local journalists. The lengthy video showed that Ramos was inside the school for around 77 minutes before officers entered a classroom that he had entered.

This timing meant that part of King's tweet — the reference to "91 minutes" — was not possible. It's unclear when, exactly, during the 77 minutes, Albarado and other officers rescued his daughter and the other children.

This story will be updated if we learn further details.

Previous Article
Next Article
Article 5 of 10 in Collection

On July 14, 2022, this story was updated following the release of surveillance footage that showed what was happening during the shooting inside Robb Elementary.