Did Officers in Georgia Kill Over 250 People?

The humor in a parody post on Facebook was lost on many who don't watch a popular zombie-themed television series. 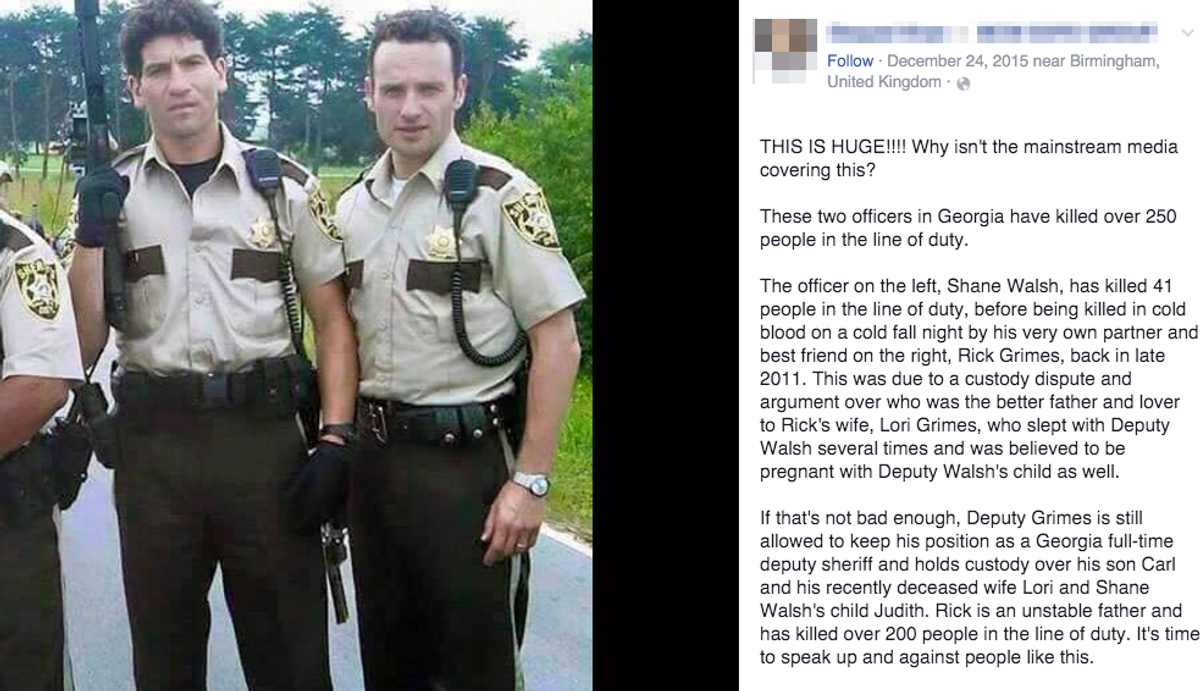 On 24 December 2015, the following meme was published to the Facebook group "MCM [Movie Comic Media] EXPO GROUP." It held that two police officers from Georgia were responsible for a multitude of crimes, including the deaths of more than 250 civilians: THIS IS HUGE!!!! Why isn't the mainstream media covering this?

These two officers in Georgia have killed over 250 people in the line of duty.

The officer on the left, Shane Walsh, has killed 41 people in the line of duty, before being killed in cold blood on a cold fall night by his very own partner and best friend on the right, Rick Grimes, back in late 2011. This was due to a custody dispute and argument over who was the better father and lover to Rick's wife, Lori Grimes, who slept with Deputy Walsh several times and was believed to be pregnant with Deputy Walsh's child as well.

If that's not bad enough, Deputy Grimes is still allowed to keep his position as a Georgia full-time deputy sheriff and holds custody over his son Carl and his recently deceased wife Lori and Shane Walsh's child Judith. Rick is an unstable father and has killed over 200 people in the line of duty. It's time to speak up and against people like this.

While the post, and its accompanying image, were recognizable to many social media users in the United States as a description of the zombie-themed television and graphic novel series The Walking Dead, its appearance in a European group led to some confusion among users unfamiliar with the show. The post was shared tens of thousands of times, and comments included the following:

Demented and evil America. Where murderers in the police and other forces are decorated. And celebrated by US government and politicians.

As a matter of fact, Andrew Lincoln, the British actor who plays one of main characters in The Walking Dead, did indeed have a role in the movie Love Actually.

While most viewers appeared to have shared the post as a joke, many were genuinely concerned about the two murderous cops and their increasing body count in a fictional, post-apocalyptic Georgia.