A video was claimed to document that angry Muslims "attacked" a Christmas tree in a Western mall, but the clip captured a post-Christmas event in Cairo. 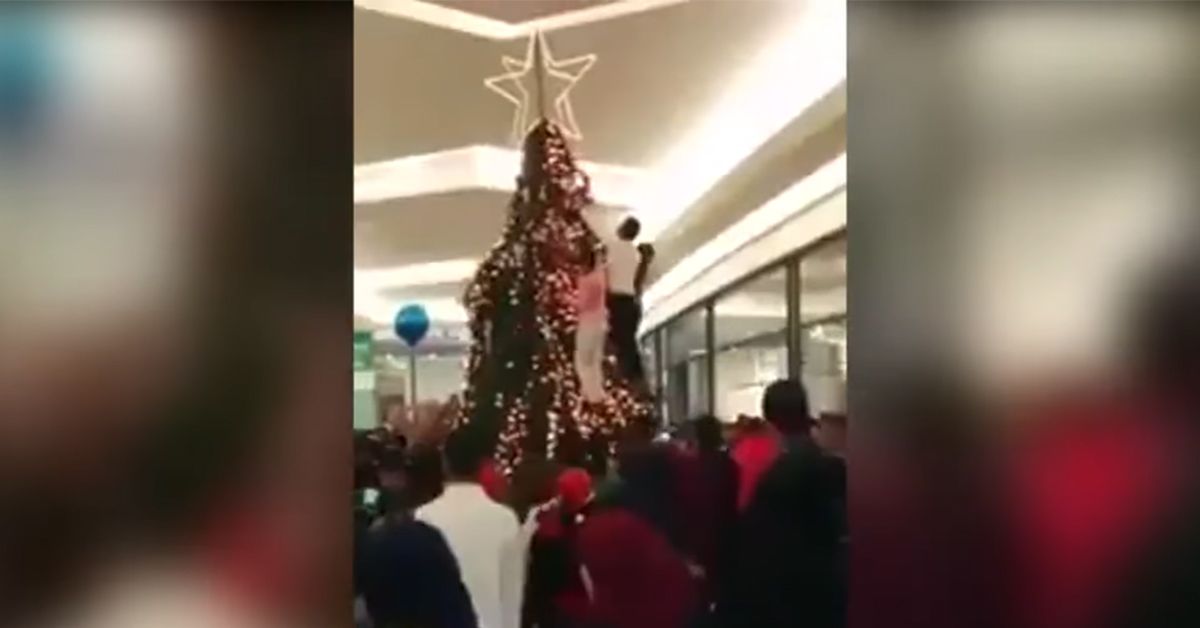 Claim:
A video depicts angry Muslims in a Western mall tearing down a Christmas tree because it offended them.
Rating:

In mid-November 2016, multiple websites published a video of people climbing on a Christmas tree in a Western-style shopping mall, along with claims that the video depicted Muslims attacking the familiar holiday symbol because it offended them:

Ahh, the religion of peace and tolerance. Whenever Muslims move to Western nations they try to change everything about the culture to conform to sharia law. When they’re not doing that, they’re tearing down Christmas trees, because, Jesus, birth of the Son of God and all that. To them, Jesus is only a prophet, to Christians, He is God’s only son born of a woman.

You can see in the video several Muslim men climbing a Christmas tree in a Mall. They are trying to tear it apart. They don’t do a very good job which leads one to believe it must be made of metal or something.

Most versions didn't specifically say that the video was filmed in the United States (they were tellingly vague about the who, what, when, where, and why aspects of the clip), but some of them referenced "Western nations" and the purported failure of Muslims to assimilate in Western countries.

Advancing the suggestion that the video had been filmed in America was a nearly universally included ancillary (and misleading) claim that Muslims had demanded the cancellation of Christmas holidays in Maryland public schools (back in 2014):

Religion of peace huh? The video below seems to point to the contrary as Muslims are seen tearing down a mall Christmas tree because it is a Christian holiday and in their minds, Jesus was only a prophet.

You can see in the video several Muslim men climbing a Christmas tree in a Mall. They try to tear it apart but don’t do a very good job at it.

Now, this isn’t the only time Muslims have attacked Christmas. Islamists in Maryland complained that they didn’t have a holiday for their “holy days” like Christians do, and a school board removed Yom Kippur, Easter, and Christmas from their school calendar.

Despite an utter lack of contextual information, the clip spread like wildfire on Facebook and Twitter. Previous versions placed the purported Muslim Christmas tree attack in European countries such as Sweden or France:


The clip was in no way new in November 2016, as an identical version of it had appeared on YouTube with no identifying information on 7 April 2016. A LiveLeak stamp led to an earlier version of the video published on 12 January 2016, which asserted the clip was filmed in "their own country." On 4 and 8 January 2016, respectively, YouTube users uploaded versions they reported were filmed at the Mall of Arabia in Cairo (archived here):

Commenters on a now-deleted version of the video published in November 2016 noted that the clip was at least a year old, and added that it did not show anyone attempting to "attack" the tree. Rather, the commenter stated that the depicted trees were "climbable" and observed that the "angry Muslims" were actually revelers who wore Christmas hats, appeared to be in good spirits, and were retrieving gifts placed at the top of the tree for kids to find:

This appears to be last Christmas at the Mall of Arabia in Cairo, Egypt. And it does not necessarily seem to be an attack according to a number of comments made by people on the video both here and on another site. One says: "Supposedly they make them climbable and there are little gift boxes at the top. We can see some people proudly showing little packages they snatch from the top of the tree. At one point a string of Christmas lights falls off the left side of the tree and someone tries to put it back on. Some people in the crowd are wearing red Christmas hats. There are even women without Muslim headscarves wearing Christmas hats in the crowd who do not look frightened at all. This video has been circulating for a while and at different times people falsely claimed that this is in the U.S. and in Sweden." I even just read an article claiming this was in Iraq, but I have been to most of the malls in northern Iraq and I can tell you this is not in Iraq. I did find numerous pictures of the Mall of Arabia in Cairo that match up with this though. The above explanation seems plausible since throughout the video you can see the guys detaching some things from the tree and giving them to other people.

Versions from November 2016 claimed that "several Muslim men" were attempting to "tear down" the tree, but still shots from the video show women and children climbing it. Furthermore, one man near the top of the tree appears to hold a "gift" plucked from the tree's apex:

A stock photograph of the same tree again placed the scene in Cairo in January 2016, and it didn't appear to depict a controversial or destroyed decoration. Separate images of the tree from December 2015 were shared to Facebook, alongside announcements about Cairo mall celebrations and gift contests:

On 29 July 2016, a Romanian Facebook user lamented misrepresentations of the video, saying that the activity depicted was not destruction of the tree, but rather "Christmas tree plundering":

Party activities involve singing and dancing around the Christmas tree, "looting" the tree of ornamental candy and apples, smashing the gingerbread house into pieces and eating it, opening Christmas crackers that have used as decorations in the tree, lotteries, creating a fiskdamm ("fishing pond") where children will "fish" for toys and candy or a treasure hunt.