A bigoted and obnoxious airline passenger demanding special treatment gets more than he bargained for. 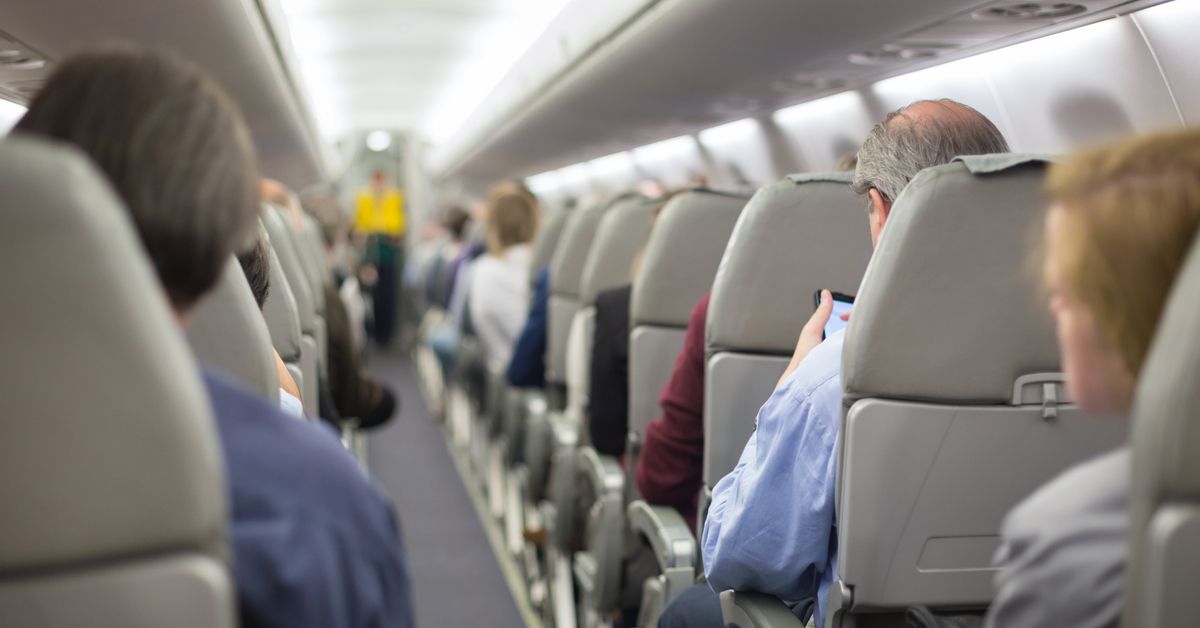 Claim:
A bigoted and obnoxious airline passenger demanding special treatment gets more than he bargained for.
Rating:

That all of the following tales are likely apocryphal doesn't lessen our enjoyment of them. It's a rare traveler indeed who hasn't encountered some haughty fellow passenger with an inflated sense of entitlement who thinks his every desire should be accommodated (no matter how unreasonable that desire might be), and it's an even rarer individual who hasn't been seated on a flight next to someone he'd like to see sucked out the window:

A 50-something year old Muslim man arrived at his seat on a crowded flight and immediately didn't want the seat. The seat was next to an elderly white woman reading her Bible. Disgusted, the Muslim man immediately summoned the flight attendant and demanded a new seat. The man said "I cannot sit here next to this infidel."

The flight attendant said "Let me see if I can find another seat."

After checking, the flight attendant returned and stated "There are no more seats in economy, but I will check with the captain and see if there is something in first class."

About 10 minutes went by and the flight attendant returned and stated "The captain has confirmed that there are no more seats in economy, but there is one in first class. It is our company policy to never move a person from economy to first class, but being that it would be some sort of scandal to force a person to sit next to an UNPLEASANT person, the captain agreed to make the switch to first class."

Before the irate Muslim man could say anything, the attendant gestured to the elderly woman and said, "Therefore ma’am, if you would so kindly retrieve your personal items, we would like to move you to the comfort of first class as the captain doesn't want you to sit next to an unpleasant person."

Passengers in the seats nearby began to applaud; some even gave a standing ovation.

A 50-something year old white woman arrived at her seat on a crowded flight and immediately didn't want the seat. The seat was next to a black man. Disgusted, the woman immediately summoned the flight attendant and demanded a new seat.

The woman said, "I cannot sit here next to this black man."

The fight attendant said, "Let me see if I can find another seat."

After checking, the flight attendant returned and stated "Ma'am, there are no more seats in economy, but I will check with the
captain and see if there is something in first class."

About 10 minutes went by and the flight attendant returned and stated "The captain has confirmed that there are no more seats in economy, but there is one in first class. It is our company policy to never move a person from economy to first class, but being that it would be some sort of scandal to force a person to sit next to an UNPLEASANT person, the captain agreed to make the switch to first class."

Before the woman could say anything, the attendant gestured to the black man and said, "Therefore sir, if you would so kindly retrieve your personal items, we would like to move you to the comfort of first class as the captain doesn't want you to sit next to an unpleasant person."

Passengers in the seats nearby began to applause while some gave a standing ovation.

On a British Airways flight from Johannesburg, a middle-aged, well-off white South African lady has found herself sitting next to a Black man. She called the cabin crew attendant over to complain about her seating.

"What seems to be the problem Madam?" asked the attendant. "Can't you see?" she said, " You've sat me next to a kaffir. I can't possibly sit next to this disgusting human. Find me another seat!"

"Please calm down, Madam," the stewardess replied. "The flight is very full today, but I'll tell you what I'll do - I'll go and check to see if we have any seats available in club or first class."

The woman cocks a snooty look at the outraged Black man beside her (not to mention many of the surrounding passengers). A few minutes later the stewardess returns with the good news, which she delivers to the lady, who cannot help but look at the people around her with a smug and self-satisfied grin:

"Madam, unfortunately, as I suspected, economy is full. I've spoken to the cabin services director, and club is also full. However, we do have one seat in first class." Before the lady has a chance to answer, the stewardess continues . . . "It is most extraordinary to make this kind of upgrade, however, and I have had to get special permission from the captain. But, given the circumstances, the captain felt that it was outrageous that someone should be forced to sit next such an obnoxious person."

Having said that, the stewardess turned to the Black man sitting next to the lady, and said: "So if you'd like to get your things, sir, I have your seat ready for you ..." At which point, apparently the surrounding passengers stood and gave a standing ovation while the Black man walked up to the front of the plane.

At different times various form of the "obnoxious passenger" legend represented above are circulated anew with their details altered. For instance, the story we recorded in 1998 about the racist white woman on the British Airways flights out of Johannesburg who refused to be seated next to a black passenger came back for another round in 2004, that time purporting to be about a white woman on a flight between Saskatoon and Calgary. In 2005 it was told of a well-to-do woman seated next to a yarmulka-wearing Jew on a flight out of Atlanta. In January 2012 the story was spread via Facebook, that time about a "50-something year old white woman" traveling on TAM Airlines (a Brazilian air carrier). More recent versions feature a Muslim passenger who is offended at being seated next to a Bible-reading woman.

We'd like to believe virtue will be rewarded, hence legends such as the ones recounted above help us to set the world to rights. Even if they never happened, we'd like to think they did, and we gain a measure of comfort from them because they reassure us that somewhere, maybe if only in the realm of legend, someone is standing up to bigots who feel entitled to special treatment over those whom they harbor prejudices against or regard as their social inferiors.

Unfortunately, such legends, though they have their uses in helping us feel better about our world, can also prove damaging and hurtful by reinforcing stereotypes: Even though not all whites would disdain sitting next to blacks, nor Muslims next to Christians, members of those groups sometimes end up being unfairly tarred by the same brush. In 2001, Hubbard Foods of New Zealand, a company that produces breakfast cereal, erred by including the "South African woman seated next to a black man" legend as a travel story in a children's newsletter that was inserted into boxes of its product. The tale had been selected for inclusion as an uplifting story imbued with a moral message, and no one thought to check its accuracy. South Africans living in New Zealand were outraged by it, as they saw the leaflet as unfairly painting them as racist and furthering an apartheid-era stereotype that is no longer valid. Hubbard Foods apologized but claimed it was too late and far too expensive to withdraw the boxes from store shelves.

Some variants of this legend type reference homosexuality rather than race or religion:

Shared with us by a USAir pilot, this tale sounded too good to be true and is, according to airline officials who describe it as another urban myth. (A West Coast version has it as a United flight.) Seems a USAir employee with the last name of Gay was flying on a company pass. Mr. Gay found a man in his seat and sat elsewhere. Since the plane turned out to be overbooked, a ticket agent approached the man in Mr. Gay's assigned seat and asked "Are you Gay?" When the bewildered man nodded that he was gay, the agent said, "Well, get your things, you'll have to get off.

The real Mr. Gay overheard and quickly interrupted, "I'm Gay." The agent told him he'd have to leave the plane at which another passenger, observing this whole scene, announced defiantly, "I'm gay, too. Heck, you can't throw us all off."

I once was on a plane where I was served by an obviously homosexual male flight attendant. At one point, he bounced over to where I was sitting and announced, "The Captain has asked me to announce that he will be landing the big scary plane shortly, so if you could just put up your trays — that would be great."

I did as he had instructed, but the woman sitting next to me did not. A few moments later, our flight attendant came back and said to her, "Ma'am, perhaps you couldn't hear me over the big scary engine, but I asked you to please put up your tray so that the captain can land the plane."

She still wouldn't comply. Now the attendant was getting rather angry and asked her again to put up the tray. She then calmly turned to him and said, "In my country, I am called a princess. I take orders from no one."

Our flight attendant replied, "Oh yeah? Well in MY country, I'm called a queen, and I outrank you, bitch! So put the tray up!"

Other versions of this legend type deal with obnoxious passengers being put in their places after displaying an exaggerated sense of self-importance due to their social status:

An award should go to the United Airlines gate agent in Denver for being smart and funny, and making her point, when confronted with a passenger who probably deserved to fly as cargo.

During the final days at Denver's old Stapleton airport, a crowded United flight was cancelled. A single agent was rebooking a long line of inconvenienced travelers.

Suddenly an angry passenger pushed his way to the desk. He slapped his ticket down on the counter and said, "I HAVE to be on this flight and it has to be FIRST CLASS."

The agent replied, "I'm sorry sir. I'll be happy to try to help you, but I've got to help these folks first, and I'm sure we'll be able to work something out." The passenger was unimpressed. He asked loudly, so that the passengers behind him could hear, "Do you have any idea who I am?"

Without hesitating, the gate agent smiled and grabbed her public address microphone. "May I have your attention please?" she began, her voice bellowing throughout the terminal. "We have a passenger here at the gate WHO DOES NOT KNOW WHO HE IS. If anyone can help him find his identity, please come to Gate 17."

With the folks behind him in line laughing hysterically, the man glared at the United agent, gritted his teeth and swore "Fuck you."

Without flinching, she smiled and said, "I'm sorry, sir, but you'll have to stand in line for that too."

The secretary of the Atheneum, London, relates that a noble member, exasperated by slow service in the dining-room, finally asked his waiter indignantly, 'Do you know who I am?'

The waiter, contemplating the member with sympathetic concern, replied, 'No, sir. But I shall make inquiries and inform you directly.'