Obamacare and the Affordable Care Act

A popular screenshot of a purported Facebook argument over Obamacare versus the ACA is of indeterminate origin. 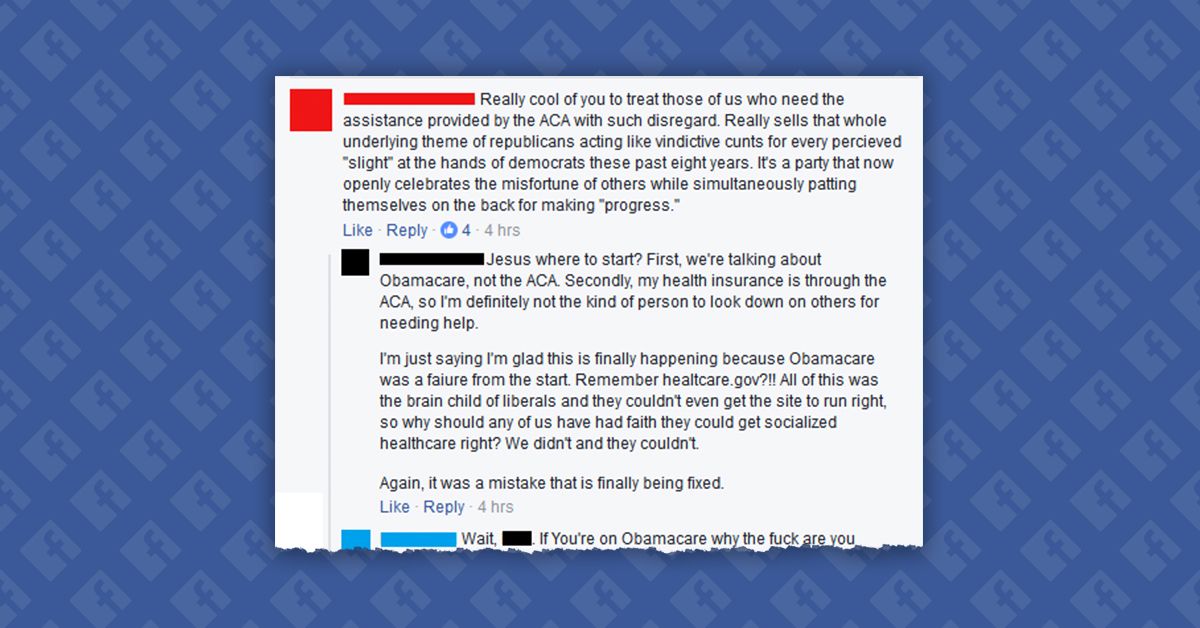 Claim:
Image is a screenshot of a sincere debate between Facebook friends over the Affordable Care Act and Obamacare.
Rating:

In January 2017, screenshots circulated appearing to show a Facebook dispute which involved a man who both opposed Obamacare and unwittingly relied on it as a health care plan. The image was rather large, and documented a friends-locked Facebook dispute between three individuals: "Red," "Black," and "Blue." It began when "Black" posted a C-SPAN link to their personal timeline, along with the following commentary:

One step closer to fixing this mistake, and only a couple more weeks left of Barry's regime. 2017 is already looking up.

I'm not on Obamacare. My insurance is through the ACA (Affordable Care Act), which is what they had to come up with after Obamacare crashed and burned as bad as it did. So I'm gonna be fine.

This is, of course, untrue, as Obamacare is another name for the Affordable Care Act. "Obamacare" was originally intended as a pejorative but quickly was adopted as its informal name.

The screenshot quickly went viral. However, it is virtually impossible to authenticate whether or not it is real without anyone party to it stepping forward with additional screenshots. All images we were able to locate obscured the names of all parties, and it does not appear that any friends of the conversation's participants have released alternate screenshots.

Here is the conversation in its entirety: