Obama Took $2.6B from Veterans for Syrian Refugees

President Obama did not cut $2.6 billion from programs for veterans and instead give a like amount to support Syrian refugees in the U.S. 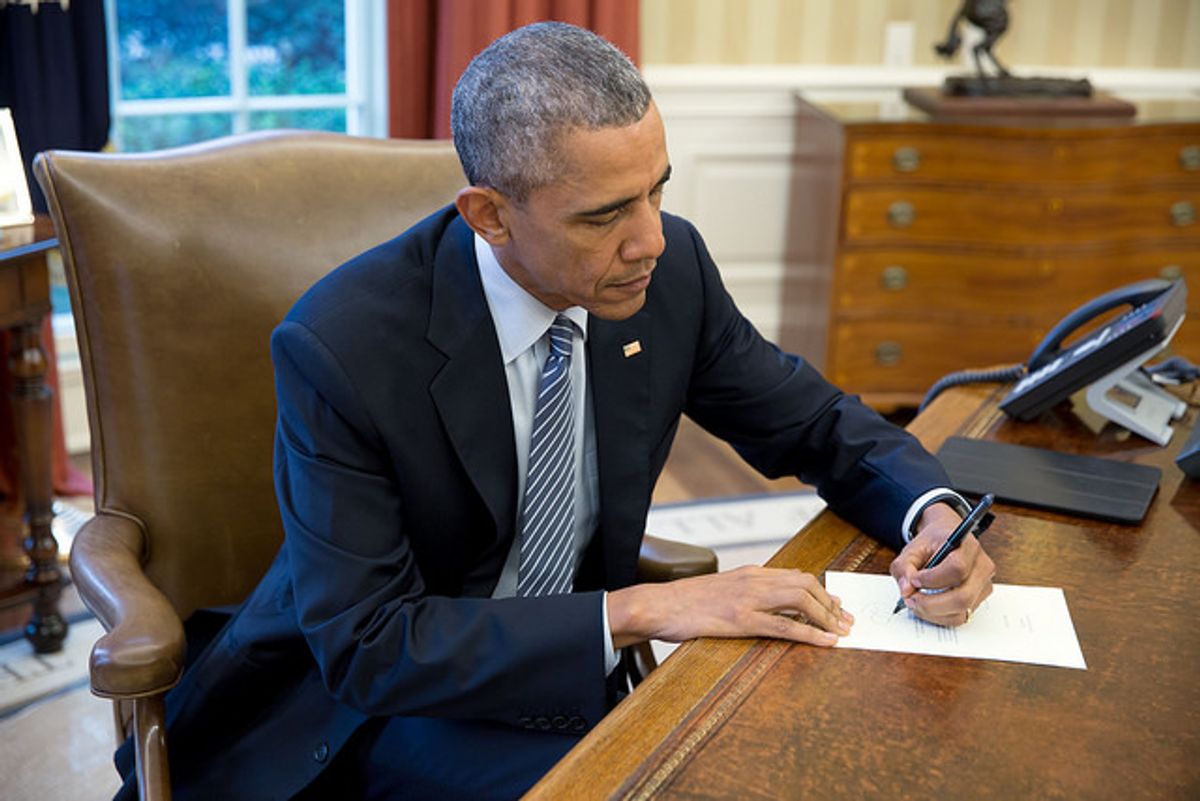 Claim:
President Obama cut $2.6 billion from programs for veterans and instead give a like amount to support Syrian refugees.
Rating:

On 15 April 2016 the web site "Ending the Fed" (ETF News) published a "breaking" news item reporting that President Obama had taken $2.6 billion from veterans' programs and allocated it to assist Syrian refugees:

Veteran Affairs is one of the most mismanaged government program in the United States. Veterans cannot make appointments, the cost for treatment is outrageous, over 307,000 veterans died waiting for care, yet nobody has been held accountable. The most recent atrocity by the VA came when the VA went to Congress, less than three months before the end of the fiscal year, short $2.6 billion in funds in order to care for the veterans.

After discussing the possibility of closing some of the VA hospitals, Congress passed an emergency spending bill worth $3.5 billion. Josh Earnest, White House spokesman, said that the United States has committed to spend $4.5 billion in order to help rebuild Syria while also addressing the refugee camps scattered throughout Europe. $419 million will be designated for humanitarian aid assisting with Syrian refugees. The money is coming from the United States Agency for International Development which means that Congress will not get the chance to deny the funding.

"Breaking" was an odd lexical choice for this report, considering that the very same article had been published by the web site Red Flag News several months earlier. "News" was even a less apt descriptor, given that what was reported bore little resemblance to actual events.

The $2.6 billion figure cited here did not represent money "cut" from veterans' programs by President Obama (or anyone else); rather it was the amount of an unexpected budget shortfall reported by the
Department of Veterans Affairs in June 2015, a potential crisis that Congress worked to stave off:

Despite harsh criticism, a House oversight committee said it supports giving the Department of Veterans Affairs more spending flexibility to head off a $2.6 billion financial shortfall this year.

Rep. Jeff Miller, R-Fla., chairman of the Veterans Affairs Committee, said he will work with chamber appropriators to allow the VA to move money to health care from other areas of its budget. The ranking member on the committee, Rep. Corrine Brown, D-Fla., said the House must immediately solve the crisis instead of “pointing fingers and assigning blame.”

The VA told lawmakers it is $2.6 billion short on funding because patients and appointments have ballooned over the past year. It wants to cover the shortfall by tapping into an emergency $10 billion Veterans Choice fund created by Congress last summer to provide outside health care to veterans who cannot get timely appointments at the VA.

VA Deputy Secretary Sloan Gibson, who testified before the House committee, said the department was unaware of the shortfall and called the sudden discovery “inexcusable.”

The problems are due to an outdated, 20-year-old financial management system and increases in demand on the nationwide health care system, Gibson said.

“As we improve access, even more veterans are coming to VA for their care,” he said.

Aid to refugees was an entirely separate story which was apparently conflated with the VA shortfall. In a 21 September 2015 daily press briefing, White House Press Secretary Josh Earnest fielded questions about aid to Syria and U.S. acceptance of Syrian refugees. In response to a question about the latter, Earnest mentioned a $4.5 billion figure, but that number referenced money designated "to help address the dire conditions inside Syria" and to aid "the more than 4 million Syrian refugees scattered across the region" — not to provide assistance to Syrian refugees coming into the U.S.:

[Y]ou saw over the weekend that Secretary Kerry announced the United States will accept 85,000 refugees from around the world ... in fiscal year 2016, and 100,000 the next year. And we've previously made clear that the President had set a goal for his team of accepting at least 10,000 Syrian refugees in the next fiscal year.

In addition to that, however, the United States today is committing to provide nearly $419 million in additional humanitarian aid for emergency health care, safe drinking water, food, shelter, and urgent-relief supplies to Syrians affected by the conflict. The United States, as you’ve heard me say many times in the last couple of weeks, remains the single-largest humanitarian donor to the Syrian crisis. And with this new announcement, the United States has now committed to provide more than $4.5 billion to help address the dire conditions inside Syria and for the more than 4 million Syrian refugees scattered across the region.

In short, the two stories were misleadingly paired to suggest President Obama had personally taken money allocated to veterans and given it to Syrian refugees. In fact, the $2.6 billion shortfall at Veterans Affairs was neither the work of the Obama administration nor an issue that went unaddressed, while the $4.5 billion figure was an entirely separate allocation made as part of the United States' ongoing efforts to assist the humanitarian crisis in Syria.