The Obama administration didn't sue on behalf of Muslim truck drivers who refused to transport alcohol. 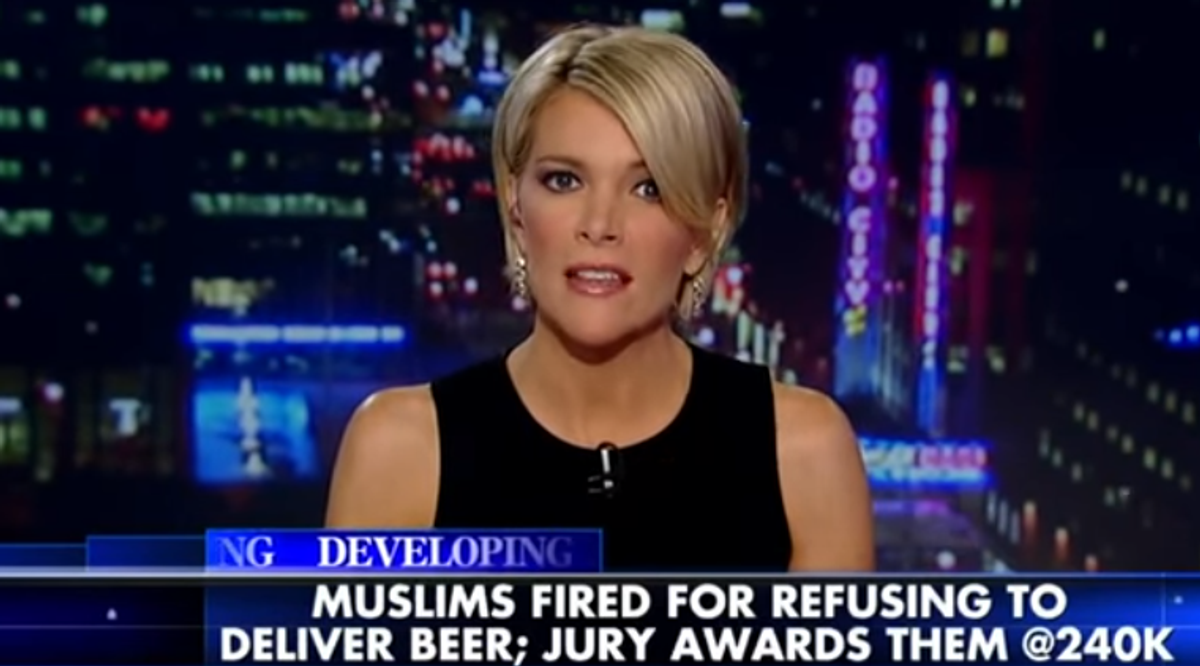 [green-label]Claim:[/green-label]  The Obama administration sued a company on behalf of two Muslim truck drivers who were fired for refusing to transport alcohol, obtaining a $240,000 religious discrimination judgment and "enforcing Sharia law."

[green-label]WHAT'S TRUE:[/green-label] The U.S. Equal Employment Opportunity Commission (EEOC) represented Mahad Abass Mohamed and Abdkiarim Hassan Bulshale in a lawsuit over their former employer's failure to accommodate their religious beliefs, and a jury awarded the pair a combined total of $240,000 in compensatory and punitive damages and back pay.

[red-label]WHAT'S FALSE:[/red-label] President Obama and/or his administration brought the lawsuit, the judgment "enforc[ed] Sharia law" upon the defendant company.


AN EDITORIAL: Last night my heart was saddened as I listened to the news. It appears that 2 Muslim truck drivers were fired from their jobs because they would not drive trucks that carried beer. So the Obama Administration took up their cause and sued the company that fired them and they won the suit and received 240,000 Dollars. The judge said their religious rights were violated. Several things must be noted about this case. 1) What business is it of the White House to get involved and represent Muslims in their civil affairs. 2) How is it that Muslims get 240,000 Dollars knowing that they would have to do this when they were hired to drive trucks. And finally, 3) why is it when Christians stand up for their religious rights and refuse to make a cake, take pictures prepare flowers for same sex-marriages they are sued and fined and threatened with prosecution and in some cases lost their businesses. Mr. Obama, it is no wonder that many Americans think you are a Muslim and not a Christian because you are quick to defend the Muslims and slow to defend those who stand for their Christian beliefs. You exhibit a double standard. If you are a Christian then please show your love for God and those who stand on Biblical principle.

Two Muslim truck drivers — former Somali "refugees" —  refused to make deliveries of beer to stores for their employer. So they were understandably fired.

And this week the Muslims were awarded a stunning $240,000 by a jury, presided over by an Obama appointee who stunned analysts by allowing the case to go forward at all.

The claim was repeated by multiple web sites including The Political Insider, and Fox News aired a 26 October 2015 segment during which anchor Megyn Kelly discussed the case with contributor Judge Andrew Napolitano. Kelly likened the case to previous religion-based disputes involving Sweet Cakes by Melissa and Kim Davis, suggesting that the Obama administration applied different standards to the case involving the truck drivers than to Christian complainants. Napolitano correctly stated that the company could have accommodated the truckers but asserted that "the way the Feds handled" the case was purely to "make a point":

Seriously though, why are they not forced to deliver beer if bakers are forced to make cakes? https://t.co/p6Vg7KzCyW

Cumulatively, the rumors held that former truck drivers Mahad Abass Mohamed and Abdkiarim Hassan Bulshale were fired from their jobs for refusing to transport alcoholic beverages in the course of their jobs. According to the claims, the Obama administration "took up" for the Muslim men, suing their former employers for not adhering to Sharia law. And in what was described as an unfair application of religious discrimination policies, those two men were awarded nearly a quarter of a million dollars — a marked contrast to the verdicts involving Sweet Cakes by Melissa (a business found liable for damages after refusing to bake a same-sex wedding cake), and Kim Davis (who was jailed for refusing to issue marriage licenses to gay couples).


A federal jury in Peoria, Ill., has awarded $240,000 to two Somalian-American Muslims who were fired from their jobs as truck drivers at Star Transport, an over-the-road trucking company, when they refused to transport alcohol because it violated their religious beliefs, according to the U.S. Equal Employment Opportunity Commission (EEOC), which brought the case. Judge James E. Shadid, the chief judge of the U.S. District Court for the Central District of Illinois, found in favor of EEOC after Star Transport admitted liability in March 2015. The resulting trial was to determine compensatory and punitive damages and back pay. The jury awarded Mahad Abass Mohamed and Abdkiarim Hassan Bulshale $20,000 each in compensatory damages and $100,000 each in punitive damages. Judge Shadid awarded each approximately $1,500 in back pay.

EEOC alleged that in 2009, Star Transport fired Mohamed and Bulshale after they were required to transport alcohol. Both men told Star Transport that they believed doing so would violate their religious beliefs under Islamic law.

EEOC also alleged that Star Transport could have but failed to accommodate the truckers' religious beliefs, as required by Title VII of the Civil Rights Act of 1964. EEOC filed suit (EEOC v. Star Transport, Inc., No. 13-cv-1240) in U.S. District Court for the Central District of Illinois in Peoria in May 2013.

As Washington Post legal analyst Eugene Volokh noted in a 23 October 2015 article, the jury's decision hinged on Star Transport's admission the drivers' religious beliefs could have been accommodated (an action required by law under the Civil Rights Act):


The court noted that Star Transport had indeed often "swap[ped] loads between drivers," and Star Transport conceded that it could have easily accommodated this request, too, but argued (unsuccessfully) that it shouldn't be liable for punitive damages.

This concession was important, and if Star Transport had fought the case, and shown that such a swap would indeed be difficult (and that its "forced dispatch" policy, which on its face generally required drivers to deliver what they were told, was consistently enforced), it should have won. But when accommodating an employee just requires a bit of extra administrative hassle, in the form of arranging a swap (given that most other drivers presumably wouldn't care about whether they are delivering alcohol), the federal Civil Rights Act requires the employer to do this.

If such a route change presented "undue hardship" to the company, the jury might not have found in favor of the truck drivers. Title VII of the Civil Rights Act of 1964 (referenced by Kelly) holds:


It shall be an unlawful employment practice for an employer ... to fail or refuse to hire or to discharge any individual, or otherwise to discriminate against any individual with respect to his compensation, terms, conditions, or privileges of employment, because of such individual’s race, color, religion, sex, or national origin ...

As such, Star Transportation's refusal to accommodate the employees' religious beliefs (in a manner that would have enabled them to retain their employment) was found to be in violation of that act. The decision had nothing to do with the enforcement of "Sharia law" on a private American company, and the suit was brought by the EEOC (not the "Obama administration") on the behalf of the two men.

The federal statutes that guided the court's decision wouldn't be applicable in the case involving Sweet Cakes by Melissa or Kim Davis, as those cases involved the relationship between a government employee/business owner and the customers they served, not the relationship between an employer and an employee, so neither was related to worker protections codified in the Civil Rights Act. Moreover, Davis, as an elected official, was exempt from Title VII protections of that nature.