Did President Obama Enforce an Islamic Prayer Opening in the U.S. House?

The House opening prayer led by imam Hamad Chebli was no different than those of the other six Islamic religious leaders who have done so since 2000 — including three during the Bush administration. 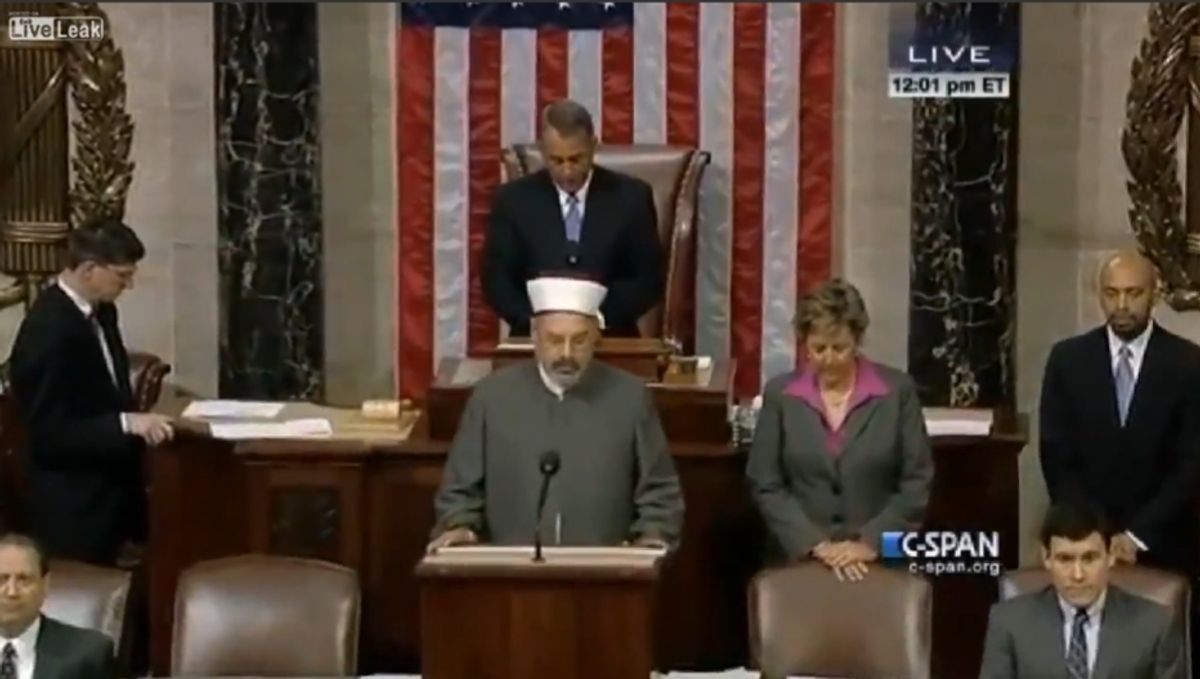 A video uploaded to the right-wing "Supreme Patriot" Facebook page purports to show an Islamic opening prayer "enforced" in the U.S. House of Representatives by President Obama.

The video, which is clipped from a C-SPAN feed of a House session televised on 13 November 2014, shows Imam Hamad Chebli of the Islamic Society of Central Jersey in South Brunswick, New Jersey, delivering a prayer on the House floor after an introduction by then-Speaker of the House John Boehner.

This is the text of Chebli's prayer:

The God of all the prophets and the messengers says in the Koran, He does not place a responsibility on you greater than you can bear. Everyone will receive the good they have earned and vice versa.

O God, bless us as we begin a new day. Bless this assembly, bless the people and Nation it represents. O God, at this time in our history, the challenges for our Nation and the world are many. O God, grant these men and women the wisdom, the guidance, and the strength to pursue compassion, justice, and sound judgment. O God, in Your wisdom, You have placed upon them great responsibility and honor. O God, please help them with Your guidance and Your light. O God, grant them the will and the means to improve the well–being of all inhabitants of this great Nation and beyond.

The same video of the same opening prayer was posted in 2014 on LiveLeak.com, accompanied by this description of events:

An abomination of sacrilegious proportions was witnessed Friday when the National Cathedral allowed Muslims to hold an Islamic prayer service within its dwelling.

Islam has overstepped its boundaries in a Christian nation of 73 percenters, and it’s getting progressively worse. Openly infiltrating our houses of government with blasphemous declarations to a false god, the particular people bowing their heads in reverence will disturb and anger you.

With the re-election of Speaker of the House John Boehner and fellow Republicans gaining majority in Senate comes an outrageous display of submission to Islam.

However, Chebli's prayer service was neither instigated nor "enforced" by President Obama, nor was this the first time such an "outrageous display of submission to Islam" occurred in the House of Representatives. Under the auspices of the Guest Chaplain program, which provides for the inclusion of opening prayers by religious leaders of various faiths sponsored by House members, seven imams have delivered Islamic opening prayers since April 2000 — including three during the G.W. Bush administration. All are listed, along with transcripts of their prayers, on the House of Representatives web site.