Is an 'Obama Don't Separate Me From My Mommy' Protest Sign Real?

A photograph showing protesters holding a sign is real, but the sign is referring to separations due to the deportation of family members in the United States rather than forcibly separating families at the border. 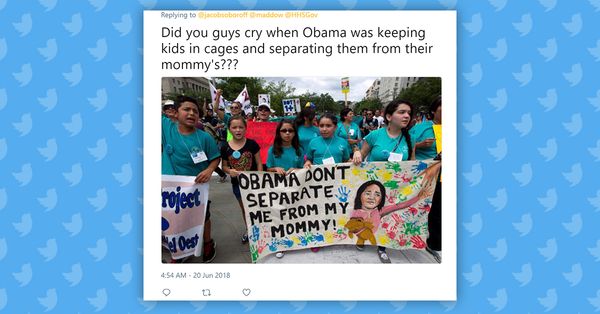 Claim:
A photograph shows a group holding a protest sign reading "Obama don't separate me from my mommy."
Rating:

As news broke in June 2018 that children were being separated from their families by immigration agents as they crossed into the United States from Mexico, an intense round of whataboutism ensued as the usual bots, paid trolls, unpaid trolls, and useful idiots took the opportunity to claim that President Barack Obama did the same thing during his time in office (he didn't). One piece of "evidence" supporting this argument was a photograph of a group of protesters holding a sign reading "Obama Don't Separate Me From My Mommy."

This image was frequently shared along with statements claiming that it destroyed "the liberal narrative," and that Obama, too, had kept children in cages after separating them from their mothers: This is indeed a genuine photograph that was taken during the Obama era in 2014. However, there major differences between the immigration policy at the center of the pictured protest and the child detention centers that were at the center of public outrage in June 2018.

In a nutshell: Families were separated under President Barack Obama as the result of deportation of undocumented people from the United States. Families were separated under President Donald Trump as parents and children were put into different detention facilities after they crossed the border to ask for asylum in the United States.

Obama was referred to by some border activists as the "Deporter-in-Chief" during his time in office, as he deported more people from the United States (thanks in part, but not completely, to a change in definition) than any other president in modern history. Many of these deportations resulted in families being separated, because children born in the United States were allowed to stay in the country but their parents were forced to leave.

A June 2014 article published by the American Civil Liberties Union criticized Obama, saying that he was not living up to the promises he made on immigration during the 2008 campaign, and that deportation was still separating children from their parents under his watch:

During the 2008 campaign, Senator Barack Obama seemed to understand their pain and promised to fix our broken immigration system. He promised to enact comprehensive immigration reform and create a pathway to citizenship for the millions of hardworking people who labor for little money at often thankless jobs to make their children's lives — and for that matter our lives— a little bit easier. He pledged to no longer separate children from their parents. Today 4 million children call an undocumented immigrant mom or dad. Children who hug their parents extra tight before they leave for work for fear they'll never see them again.

The viral photograph was taken by Associated Press photographer Jose Luis Magana on 2 August 2014 as demonstrators asked Obama to modify his deportation policies.

Obama attempted to mitigate the issue a few months later when he announced the "Immigration Accountability Executive Action” plan. One of the central points of the plan was to focus on felons rather than families; another was to provide undocumented immigrants already living in the United States a chance to avoid deportation by passing a background check and paying taxes.

This photograph shows a group of protesters urging President Barack Obama to modify his policies in order to ease deportations that result in family separations. The sign does not refer to children that were taken away from their parents and placed in detention centers.