Did Barack Obama Say 'If We Don’t Do Something About This President, I Will?'

A quote attributed to former president Barack Obama has him vowing to "do something" about President Trump if no one else does. 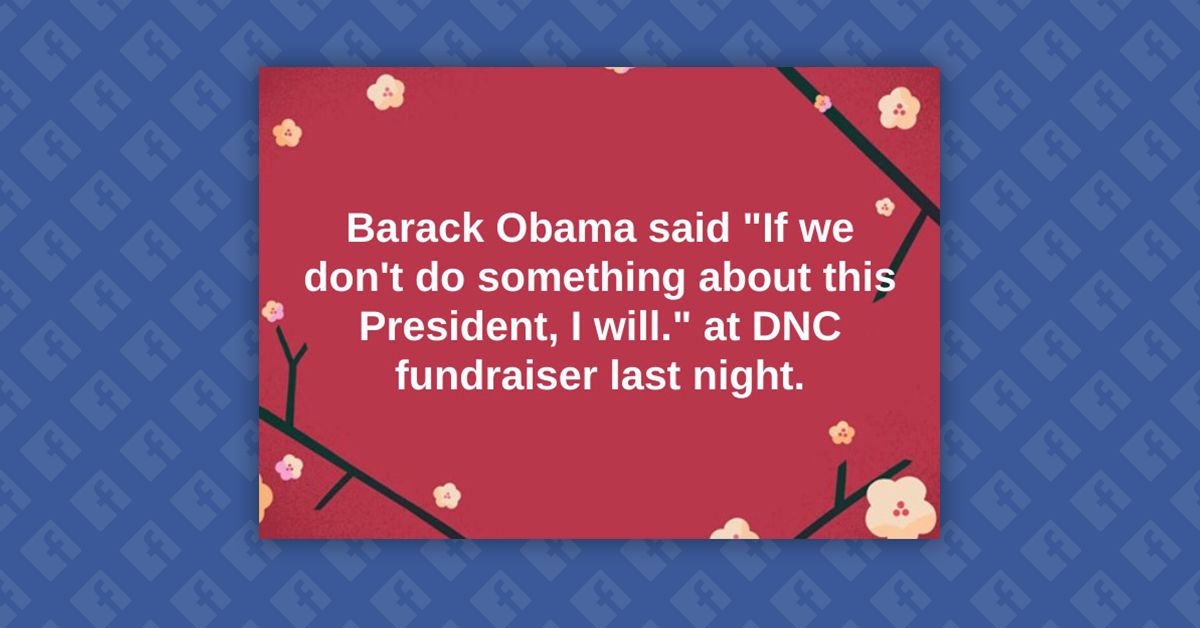 Claim:
President Obama said "If we don’t do something about this president, I will" at a Democratic fundraiser in June 2018.
Rating:

A quote ostensibly uttered by former president Barack Obama regarding how he was going to "do something" about President Trump (if no one else stepped forward to do so) began bouncing around Facebook pages and troll forums at the end of June 2018: This rumor garnered an additional (unearned) patina of credibility when it was retweeted by the verified Twitter account of conservative radio host Bill Mitchell: Barack Obama did speak at a Democratic National Committee Fundraiser on 28 June 2018 in Beverly Hills, California, but his remarks did not include anything matching the statement offered here.

Multiple news outlets reported on the former president's remarks at this fundraiser, including Politico, the Daily Caller, CNN, and Fox News, yet we found no reference to what would have been a very newsworthy statement (if Obama had truly made it) in any news report about Obama's speech. And although this quote meme has been posted to numerous online forums and sites, we haven't turned up a single instance in which it was accompanied by any evidence documenting that Barack Obama uttered these words.

Time magazine's report on Obama's speech noted that the former president didn't mention President Donald Trump once by name, and that even though Obama made subtle references to his disapproval of the current administration, his main focus in his speech was to mobilize Democrats:

Former President Barack Obama re-emerged into the political scene after months of maintaining a low profile, making subtle references to his disapproval of the current administration and possibly illuminating the reason behind his return to the limelight.

“This is a moment of great urgency and you are right to be concerned,” Obama said at a Democratic National Committee fundraiser event in Beverly Hills, California, according to Politico, though he never mentioned the administration by name.

Another portion of the speech quoted by the Los Angeles Times documented how Obama focused on calling the Democratic community to action rather than avowing to "do something" on his own:

He said Democrats should not get caught up in the kind of cult of personality his own candidacy inspired in some circles.

“I’m giving you the executive summary: Vote. Participate. Get involved,” he said as the crowd applauded. “And do not wait for the perfect message, and don’t want to feel a tingle in your spine because you’re expecting politicians to be so inspiring and poetic and moving. Politics, like life, is imperfect. But there is better and there is worse.”

Likewise, CNN's account of the speech recorded the former president as exhorting his audience to take action themselves:

"If what you are doing requires no sacrifice at all, then you can do more," Obama told the tony crowd at a sweeping multi-million-dollar Beverly Hills home. "If you are one of these folks who is watching cable news at your cocktail parties with your friends and you are saying 'civilization is collapsing' and you are nervous and worried, but that is not where you are putting all your time, energy and money, then either you don't actually think civilization is collapsing ... or you are not pushing yourself hard enough and I would push harder."

At one point, he turned to the crowd and declared, "Enough moping, this is a mope-free zone."

The "if we don't do something ... I will" quote was apparently either made up out of whole cloth or was someone's very bad paraphrase of Barack Obama's comments at the June 2018 DNC fundraiser.