Did Obama 'Order the CIA to Train Islamic State'?

Supporters of Donald Trump attacked his predecessor's counterterrorism record after the death of IS leader Abu Bakr al-Baghdadi in October 2019. 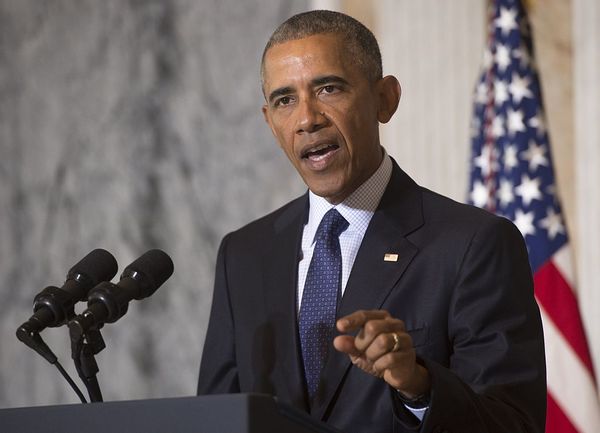 According to multiple reputable reports and investigations, a CIA program called Timber Sycamore provided training and weapons to Syrian rebels fighting against the regime of Bashar al-Assad, but some of those arms ultimately ended up in the hands of Islamic State fighters.

However, the theft and smuggling of the arms were unintended and not the result of a deliberate policy or instructions from President Barack Obama or any part of his administration, which actually set up a separate program to arm and train Syrian rebels to fight Islamic State, specifically.

In October 2019, after the reported death of the Islamic State group (IS) leader Abu Bakr al-Baghdadi, some apparent supporters of U.S. President Donald Trump turned their focus towards his predecessor's record with regard to the terrorist network.

Right-wing conspiracy theorists have long claimed, implied, or speculated that former President Barack Obama has questionable loyalty to the United States, or that he is a secret Muslim and even a secret militant Islamist. Trump himself has repeatedly promulgated such false allegations, including the birther conspiracy theory, and during the 2016 presidential campaign he described Obama, more than once, as the "founder" of IS.

After the death of al-Baghdadi — who reportedly detonated a suicide vest during a U.S. raid on a compound in Syria — multiple social media users shared one article in particular: a 2015 post on NewsPunch, a website formerly known as YourNewsWire, which is known to publish junk news as well as sensationalist distortions of real news stories. The headline read "Declassified Documents: Obama Ordered CIA to Train ISIS." The article reported that:

"Government watchdog Judicial Watch published more than 100 pages of formerly classified documents from the U.S. Department of Defense and the State Department. The documents obtained through a federal lawsuit revealed the agencies earlier views on ISIS, namely that they were a desirable presence in Eastern Syria in 2012 and that they should be 'supported' in order to isolate the Syrian regime.

"The U.S. intelligence documents not only confirms [sic] suspicions that the United States and some of its coalition allies had actually facilitated the rise of the ISIS in Syria — as a counterweight to the Syrian government of President Bashar al-Assad — but also that ISIS members were initially trained by members and contractors of the Central Intelligence Agency at facilities in Jordan in 2012."

The NewsPunch article cited a few sources, including a 2015 article on the website Examiner.com, whose headline similarly claimed "Obama Ordered CIA to Train ISIS Jihadists: Declassified Documents," and a 2015 AlterVista blog post. The Examiner.com article stated:

"U.S. intelligence documents released to a government watchdog confirms [sic] the suspicions that the United States and some of its so-called coalition partners had actually facilitated the rise of the Islamic State of Iraq and Syria (ISIS) as an effective adversary against the government of the Syrian dictator President Bashar al-Assad. In addition, ISIS members were initially trained by members and contractors of the Central Intelligence Agency (CIA) at facilities in Jordan in 2012. The original goal was to weaken the Syrian government which had engaged in war crimes against their own people, according to a number of reports on Sunday."

The Examiner.com report also cited as a source the same AlterVista post, which stated "The ISIS terrorists, who were initially trained by the CIA in Jordan in 2012 to destabilize the Syrian government, are engaged in crimes against humanity in the areas under their control." Notably, that post was in reality a republication of a May 2015 article published by Press TV, Iran's state-funded television network.

The claim that the CIA, under orders from Obama, had set out to train IS in 2012, was not actually contained or revealed in declassified U.S. Department of Defense documents, contrary to both NewsPunch's and Examiner.com's characterization. The claim instead originated in a report by an Iranian state-funded broadcaster.

Internal emails obtained by Judicial Watch through Freedom of Information Act requests included an August 2012 memo distributed to military, Defense, Homeland Security, FBI, and State Department officials, which gave a provisional outline of the circumstances surrounding, and participants involved in, the Syrian Civil War, as follows:

"The Salafist, the Muslim Brotherhood, and AQI [Al Qaeda in Iraq] are the major forces driving the insurgency in Syria. The West, Gulf countries, and Turkey support the opposition, while Russia, China and Iran support the [Assad] regime."

Of particular relevance, that memo also included the following "assumptions" and predictions:

7. A. The [Assad] regime will survive and have control over Syrian territory.
B. Development of the current events into proxy war: With support from Russia, China and Iran, the regime is controlling the areas of influence along coastal territories...and is fiercely defending Homs, which is considered the primary transportation route in Syria. On the other hand opposition forces are trying to control the Eastern areas...adjacent to the Western Iraqi provinces...in addition to neighboring Turkish provinces. Western countries, the Gulf states and Turkey are supporting these efforts... [Emphasis added]

The memo thus indicated that Western countries, including the United States, were at that time supportive of the opposition to Syrian President Bashar al-Assad. This was not a revelatory point in October 2019, nor in May 2015, when Judicial Watch published the internal documents, nor even in 2012, when the Obama administration openly and publicly declared its support for the rebels.

The memo does not even mention U.S.-backed training of Syrian opposition forces, and certainly does not articulate a viewpoint that is pro-IS, or reflect a desire or intent, on the part of Obama himself or any part of his administration, to train, equip, bolster or facilitate IS.

In fact, the very same memo, quoted so extensively in the articles mentioned above, actually cites the emergence of IS in Iraq as one of the potentially "dire consequences" of the instability caused by the Syrian Civil War, stating:

8. D. The deterioration of the situation has dire consequences on the Iraqi situation and are as follows:

1. This creates the ideal atmosphere for AQI to return to its old pockets in Mosul and Ramadi, and will provide a renewed momentum under the presumption of unifying the jihad among Sunni Iraq and Syria, and the rest of the Sunnis in the Arab world against what it considers one enemy, the dissenters. ISI [Islamic State of Iraq, a precursor to Islamic State of Iraq and the Levant, or IS] could also declare an Islamic State through its union with other terrorist organizations in Iraq and Syria, which will create grave danger in regards to unifying Iraq and the protection of its territory.

However, the United States did train and arm Syrian rebels, beginning in late 2012/early 2013. The program began as a covert CIA operation, but was later formalized and given the code name "Timber Sycamore," although it remained classified. Trump ordered the operation to be closed down in 2017, according to reports.

During its years of operation, Timber Sycamore reportedly saw hundreds of millions of dollars spent, annually, on arming and training thousands of anti-government Syrian rebels. That's largely what happened, but according to multiple reports and investigations, some of the arms provided to the rebels were stolen or traded and ended up on the black market in Syria, with some ultimately being acquired by IS fighters.

That was an unfortunate and inadvertent consequence of the program, rather than its aim. Indeed, far from intending the program to be used to train or arm IS fighters, the Obama administration actually set up a separate initiative, with Congressional approval, specifically to train and equip Syrian rebels to fight against IS. The program was not a success and was shut down in 2015.

Both NewsPunch and Examiner.com claimed that Obama had "ordered the CIA to train ISIS." That's not what happened.

According to multiple reports by reputable news organizations, the CIA (under the Obama administration) carried out a covert program of training and arming Syrian rebels to fight against the Assad regime. That's largely what the program achieved, too; but as a result of greed and corruption, some of the weapons supplied to the rebels were sold on to the black market, and some of those ended up in the hands of IS fighters.

One could conduct a reasonable debate about the Obama administration's overall management of the program, its efforts to vet the intermediaries involved, or prevent foreseeable theft or smuggling of the weapons, and so on. But one cannot, based on the facts available, claim that Obama "ordered the CIA to train IS." He didn't.

Moreover, we know for a fact that he implemented a program that set out to do just the opposite — training and equipping Syrian rebels to fight and destroy IS.