President Obama has not removed a vow to defend the U.S. from the Oath of Allegiance sworn by all newly naturalized citizens. 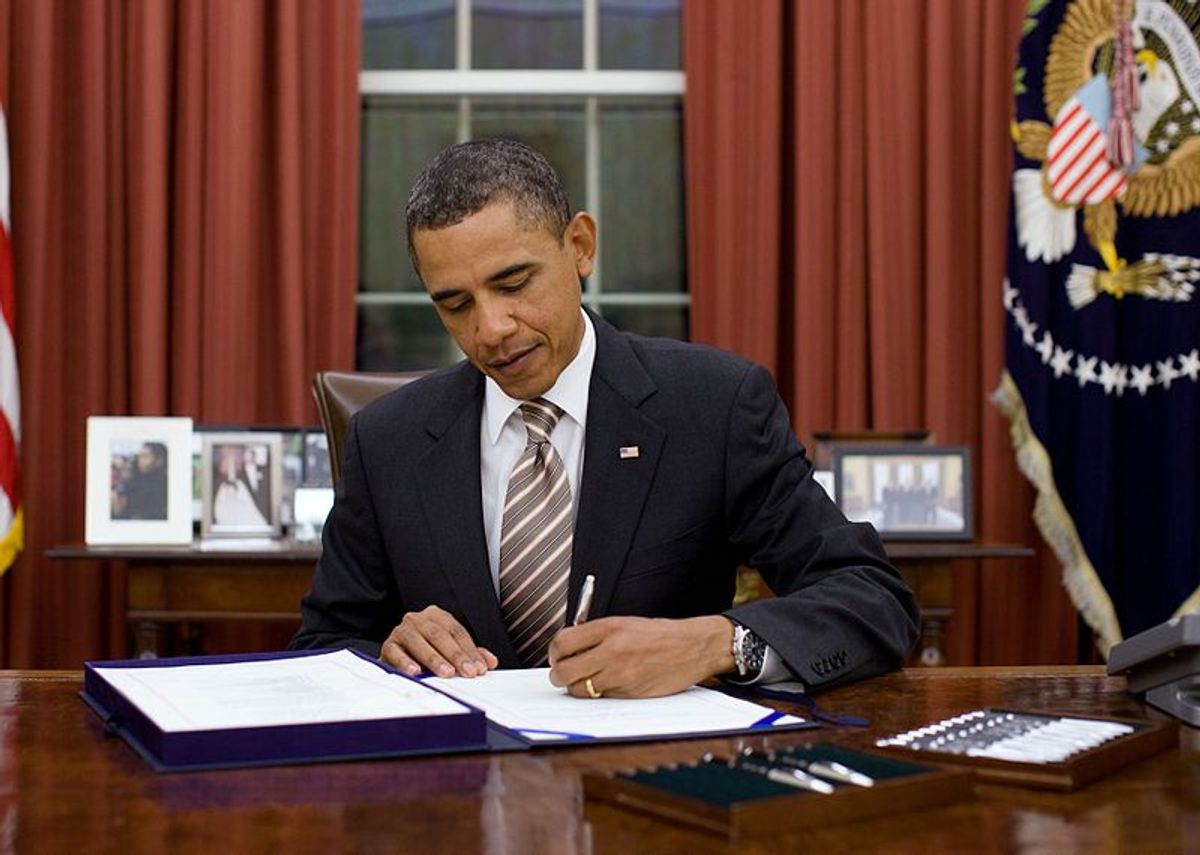 Claim:
President Obama has changed the Oath of Allegiance for naturalized citizens to remove a vow to defend the U.S.
Rating:

On 21 July 2015, USCIS announced a policy update clarifying the eligibility requirements for those seeking religiously-based waivers to portions of the Oath of Allegiance.

The policy update did not remove a vow to defend the U.S. from the Oath of Allegiance, nor did it establish new exceptions to the oath.

On 21 July 2015, United States Citizenship and Immigration Services (USCIS) issued a policy alert with the subject "Modifications to Oath of Allegiance for Naturalization" [PDF]. Immediately, social media users and blogs declared the policy change a fundamental threat to American tradition, posting tweets (examples of which are embedded above) decrying the changes and circulating articles holding that President Obama had removed "a pledge to defend the USA" from the oath:

New “adopted” Americans won’t have to pledge to defend the USA. Yes, you heard it right! Obama’s administration removed the lines that required that.

So that means that in an age when people are streaming here to pretend to become Americans in order to commit acts of terror, now Obama won’t even ask them to voice the words that they will defend the USA.

Louisiana Gov. Bobby Jindal told Breitbart that the policy update was "ridiculous," and (inaccurately) claimed USCIS was "changing" the oath:

I think the President needs to fire the director immediately. I think Congress needs to pass a law to stop them from changing the oath. Let’s be honest here, immigration without assimilation is invasion. We’ve always said the people coming here have to want to be Americans otherwise why are they coming here in the first place?

Some key details were lost in translation, however. While naturalized citizens are required to swear an oath that includes their promise to bear arms on behalf of the United States and to perform noncombatant service in the U.S. armed forces when required by law, existing policy already allowed new citizens to obtain waivers to delete or modify portions of the oath that conflicted with their deeply held beliefs or religious tenets (including the bearing of arms or military service). The policy update simply clarified the eligibility requirements for those religiously-based waivers; it didn't change the oath itself:

In general, a naturalization applicant must take an oath of allegiance in a public ceremony, in addition to meeting other eligibility requirements, in order to naturalize. The oath includes the clauses to bear arms on behalf of the United States and to perform noncombatant service in the U.S. armed forces when required by law. An applicant may be eligible for certain modifications to the oath to exclude the clauses based on religious training and belief or a conscientious objection. This guidance updates Volume 12 of the Policy Manual to clarify the eligibility requirements for the modifications.

The "Oath of Allegiance Modifications and Waivers" policy page linked above explains that the standard of proof required for an applicant to obtain a waiver to the oath based upon religious or conscientious objection was already high:

In order to modify the oath, the applicant must demonstrate, by clear and convincing evidence, that he or she is unwilling or unable to affirm to these sections of the oath based on his or her religious training and belief, which may include a deeply held moral or ethical code.​ ​
​
There is no exemption from the clause “to perform work of national importance under civilian direction when required by the law.”

The policy guidance indicates applicants are required to pass a "three-part test" during which time they have to explicitly establish the basis of their religious or conscientious objection to military service. Moreover, no such waiver is allowable in scenarios involving objection to a specific war or conflict (merely a broader belief held against the concept of war or bearing arms):

In order for an applicant to qualify for a modification based on his or her “religious training and belief,” the applicant must satisfy a three-part test. An applicant must establish that:​
​
• He ​​or she is opposed to bearing arms in the armed forces or opposed to any type of Service in the armed forces;​
​
• The objection is grounded in his or her religious principles, to include other belief systems similar to traditional religion or a deeply held moral or ethical code; and ​
​
• His or her beliefs are sincere, meaningful, and deeply held.​
​
The applicant is not eligible for a modified oath when he or she is opposed to a specific war. Religious training or belief does not include essentially political, sociological, or philosophical views. An applicant whose objection to war is based upon opinions or beliefs about public policy and the practicality or desirability of combat, or whose beliefs are not deeply held, does not qualify for the modification of the oath.​ ​

The clause Jindal and many social media users found so important was not one that dated to the American Revolution or any far-flung point in history. In fact, it wasn't a part of the oath until 1950 (followed by a final update in 1952 pertaining to civilian conscription):

The Immigration Act of September 23, 1950, added text to the oath of allegiance about bearing arms on behalf of the United States when required by the law; and performing noncombatant service in the armed forces of the United States when required by the law. Prior to 1946, the Supreme Court had ruled that the language in the oath about supporting and defending the Constitution and laws of the United States against all enemies implied a promise to bear arms. This was challenged in the court case of Girouard v. U.S. (328 U.S. 61). The Court ruled that the oath of allegiance did not imply a promise to bear arms. A refusal to bear arms was justified on the basis of religious training and beliefs. Under current law, an applicant opposed to bearing arms or performing noncombatant service because of his or her religious training and beliefs is exempt from taking the full oath of allegiance.