Did Obama Call Americans 'Lazy' in an Overseas Speech?

Pundits accused President Obama of insulting Americans after he used the word "lazy" during a town hall question-and-answer session in Laos. 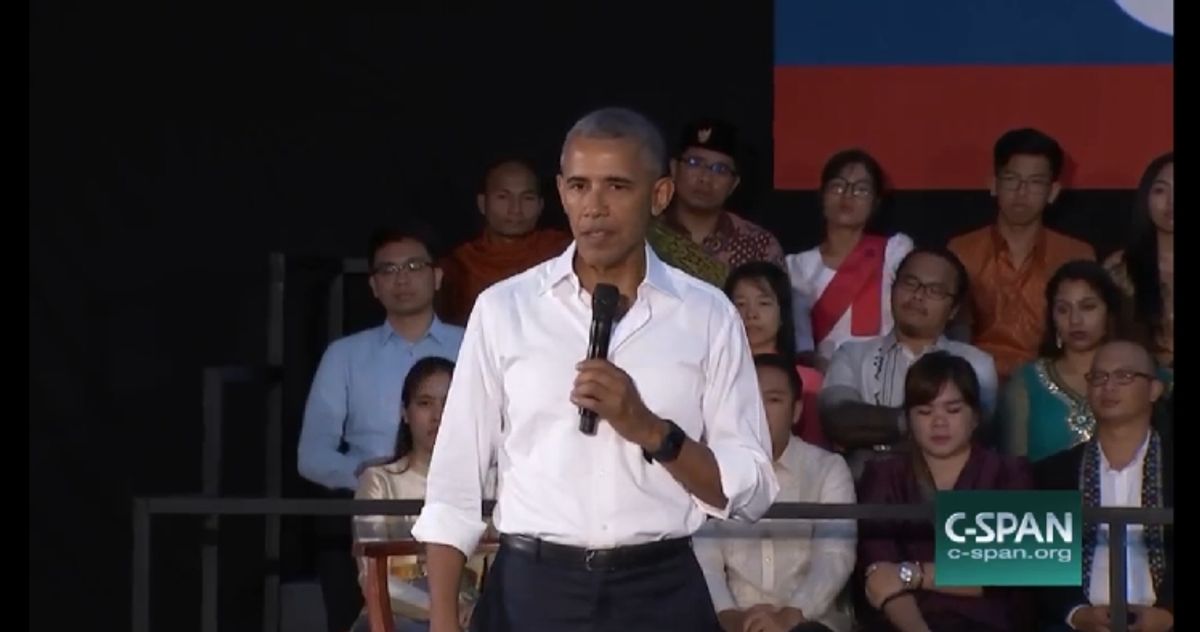 President Obama said that when environmental destruction occurs, it's usually because we've been "lazy" and not tried hard enough to find creative solutions; in a pitch for greater engagement between the U.S. and Southeast Asia, Obama said sometimes you can feel lazy when you live in a big country and think you don't have to learn about other people.

Obama didn't describe Americans as (or accuse Americans of being) "lazy."

Barack Obama became the first sitting United States president to visit the country of Laos on 5 September 2016, when he arrived there to participate in a summit of Southeast Asian nations. On the first day of his trip, President Obama met with Bounnhang Vorachith, the president of Laos, then traveled the next day to Luang Prabang in the northern part of the country to tour a Buddhist temple and participate in a town hall meeting with members of the Young Southeast Asian Leaders Initiative (YSEALI).

A wide range of matters were discussed during the lengthy question-and-answer session, notably the future of U.S.-Southeast Asia relations, the importance of youth participation in government, prospects for international trade agreements, the challenges of climate change and environmental protection, and global health concerns.

Interestingly, though, as far as certain politically-oriented blogs and web sites were concerned, the only thing newsworthy that happened at the event was Obama twice uttering the word "lazy" in the context of addressing some of the aforementioned challenges.

According to these sources, Obama out-and-out called Americans "lazy" in both instances. Here, for example, is how the conservative web site The Federalist reported his remarks:

For one, Obama said Americans’ reluctance to embrace his favored environmental policies is a sign of laziness.

“Usually when you see the environment destroyed, it’s not because it’s necessary for development,” Obama said. “It’s usually because we’re being lazy and we’re not being as creative as we could be about how to do it in a smarter, more sustainable way.”

He also accused Americans of being isolated and ignorant because the United States is such a big country.

"The United States is and can be a great force for good in the world. But because we’re such a big country, we haven’t always had to know about other parts of the world,” he said. “If you’re in the United States, sometimes you can feel lazy and think we’re so big we don’t have to really know anything about other people.”

Looked at objectively, it's plain to see Obama's statements were misrepresented in both cases. Beginning with the first, the claim that Obama said words to the effect of "Americans’ reluctance to embrace his favored environmental policies is a sign of laziness" is flat-out false.

As is clear from the full context of his remarks — which were in response to a direct question about reconciling the seemingly conflicting ideals of economic development and environmental protection — Obama was making the point that economic development doesn't have to come at the cost of the environment. When environmental destruction does occur, he was saying, it's because we aren't trying hard enough to figure out how to develop sustainably:

And so part of the thing for young people like you, whether you’re in government or an NGO, you’re going to have to learn the best practices so that you can still grow, but you do so in a way that can be sustained over a long period of time.  And look, the United States is still learning how to do this, and we’ve been at it a long time.  But we used to have terrible pollution everywhere.  And we ultimately passed laws like the Clean Air Act and the Clean Water Act, and what we discovered was when you set rules to preserve the environment, that companies will adjust, and they’ll find new and innovative ways to make the same products and make the same amount of money, but do it in a way that actually is good for the environment.

So usually, if you see the environment destroyed, it’s not because that’s necessary for development.  It’s usually because we’re being lazy, and we’re not being as creative as we could be about how to do it in a smarter, sustainable way.

In the second instance, Obama is accused of accusing Americans, because they live in a big country, of being lazy, isolated and ignorant. Once again, let's check the context. First, here's the question Obama was asked:

Good afternoon.  I'm from Thailand.  And my question is, in the next 10 years, what do you expect ASEAN [Association of Southeast Asian Nations] people to think about the U.S.A, and why?

And here is Obama's complete answer:

Well, my hope is, is that the next President will continue my policy of meeting regularly with ASEAN leaders.  We are working on a whole range of different issues, from how can we help develop health care networks so that people are getting better health care, but also so that we identify if there’s a disease and we can stop it before it starts spreading, to disaster relief, so that if there’s a typhoon that there’s local capacity to respond quickly, to economic development, to education.  And some of these programs, they’ll take some years before they’re approved.  And my hope is that 10 years from now, people will look back and they’ll say that the engagement that we began with ASEAN now has developed so that we have a very mature and deep relationship in all areas.

And I believe that the United States is and can be a great force for good in the world.  But because we're such a big country, we haven't always had to know about other parts of the world.  If you are in Laos, you need to know about Thailand and China and Cambodia, because you're a small country and they’re right next door and you need to know who they are.  If you you're in the United States, sometimes you can feel lazy and think we're so big we don't have to really know anything about other people.

And that's part of what I'm trying to change, because this is actually the region that's going to grow faster than anyplace else in the world.  It has the youngest population, and the economy is growing faster than anyplace.  And if we aren't here interacting and learning from you, and understanding the culture of the region, then we'll be left behind.  We'll miss an opportunity.  And I don't want to that to happen.

The context shows that Obama did not accuse Americans of anything, much less being lazy, isolated, and ignorant. To be sure, he did say: "...sometimes you can feel lazy and think we're so big we don't need to know anything about other people." But to call that an "accusation" is a misrepresentation. In context, it was a folksy way of stating a plain fact: When you're a superpower it's all too easy to rest on one's laurels and pass up opportunities to engage with other countries — to one's own detriment.

"There needs to be more engagement between the U.S. and Southeast Asia" would be a fair summary of President Obama's overall message to these potential leaders of their respective nations. One need not agree with that message, but in the interests of honest debate one ought not to misrepresent it, either.