Does the NYPD Use Robot Dogs in Its Police Work? 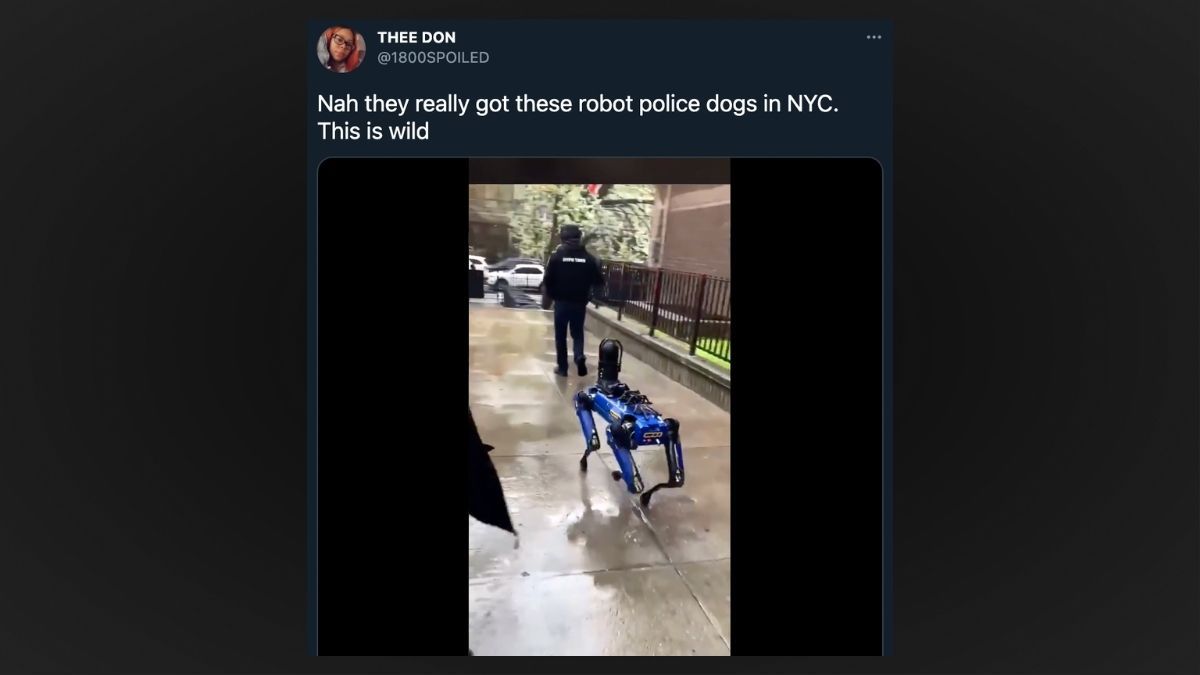 Claim:
Since 2020, the New York Police Department has been using Digidog, a robotic police dog, designed to help police officers in emergencies, and to help them see their surroundings better at crime scenes.
Rating:

Since 2020, the New York Police Department (NYPD) has been using a unique tool to assist with crime scenes and emergencies: robot dog technology.

Reports emerged in June 2020 of Boston Dynamics — the robotics company behind Digidog — selling it to organizations and even to police departments around the country. The Digidog, according to the NYPD, can be deployed in dangerous situations, and in emergencies to assess the safety of a possible crime scene, but many activists have raised privacy and civil rights concerns. The NYPD has already used it at crime scenes in the Bronx, Brooklyn, and Queens.

One person tweeted a video claiming it showed one such robot dog being used somewhere in New York City.

According to the NYPD, it is testing robot dogs to evaluate their capabilities against other models already being used by its emergency service unit and bomb squad.

The New York Post shared a video of the robot being deployed at a home invasion crime scene in a Bronx neighborhood. This drew the criticism of U.S. Rep. Alexandria Ocasio-Cortez, who tweeted, “robotic surveillance ground drones are being deployed for testing on low-income communities of color with under-resourced schools.”

She added, “When was the last time you saw next-generation, world class technology for education, healthcare, housing, etc consistently prioritized for underserved communities like this?”

Indeed, activists have raised concerns about the long term impact of such robot dogs. Relying on them to do police work could result in “implications for bias, mobile surveillance, hacking and privacy.” Furthermore, such robots could eventually be weaponized.

We already covered how the U.S. Air Force was using robot dogs for security at one base in Florida.

Since the news broke about Digidog, backlash only grew. On April 22, 2021, the contract with Boston Dynamics was terminated according to police officials, who added that the dog would be returned to the company. John Miller, the police department's deputy commissioner for intelligence and counterterrorism, said the lease for the dog was scheduled through August, but they changed the timeline after the robot became a “target” for people who he said had improperly used it to fuel arguments about race and surveillance.

“People had figured out the catchphrases and the language to somehow make this evil,” Miller said.

Given that the NYPD confirmed that such robot dogs are being used and tested around different neighborhoods in New York City, we rate this claim as “True.”

April 29, 2021: Updated to include termination of Digidog use.