The “color of the day” system was first instituted by the NYPD street crime unit in the 1970s. 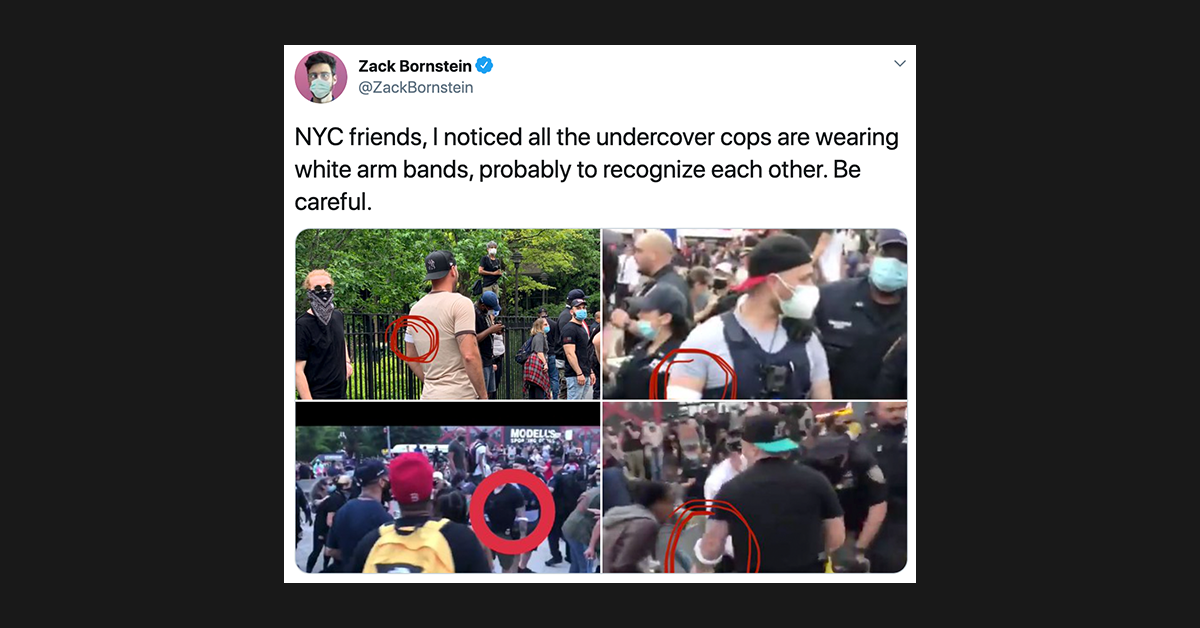 In late May and early June of 2020, following the death of an unarmed black man named George Floyd while pinned to the ground by a white Minneapolis police officer, demonstrations against police violence toward black citizens drew massive crowds in several major cities. These events drew attention not only to systemic problems in American policing, but also to police tactics used for crowd control or riots. One such observation, made in a Twitter post that went viral, was that non-uniformed NYPD police officers involved in arresting protesters wore white arm bands: First, a clarification. The individuals shown above are not technically “undercover cops.” They are, instead, plainclothes police officers. In addition to their arm bands, they also have visible police body cameras and handcuffs in their back pockets, along with other fairly obvious indications of their status as law enforcement officers. In other words, plainclothes officers are equipped with the same basic equipment a uniformed patrol officer would have, but do not conspicuously advertise their affiliation to the police with a uniform. Undercover police officers, on the other hand, would take active steps to fully conceal their connection to law enforcement.

However, the claim that NYPD plainclothes police officers use arm bands to identify themselves is entirely factual. Known as the “color of the day” system, it was first introduced in 1971 by the NYPD’s street crime unit. Because these plainclothes officers were armed and placed in positions that attracted muggings or similar crimes in public places, the NYPD was concerned about uniformed officers shooting the plainclothes officers working this job. The solution, as described in a 1979 history of the street crime unit, was colored arm bands:

"Elastic armbands are issued to each street crime unit member, with a color of the day being determined and relayed over the department teletype network to all commands and law enforcement agencies."

Currently, the color of the day system applies to all NYPD plainclothes officers, and is a required part of the job, regardless of the presence of large demonstrations or protests, as stated in a 2017 NYPD patrol officer’s manual. The color, the manual states, can be displayed as an arm band or a headband (emphasis ours):

"Uniformed members of the service assigned to civilian clothed enforcement duties are required to have their service 9MM semi-automatic pistol and one extra fully loaded magazine or their service .38 caliber revolver with twelve extra cartridges, handcuffs with key, ... and the 'color of the day' head/arm band on their persons."

The tweet that went viral showed plainclothes NYPD officers wearing white arm bands, but the color, as previously mentioned, changes day by day. Here is a video taken of plainclothes officers from a day when the color was orange:

Because it is publicly known that plainclothes officers identify each other with colored bands to prevent police-on-police shootings in New York City (and also in some police departments, predominantly in the Northeast), we rank this claim to be "True."