Did the NYC Sanitation Department Put Up These Controversial Posters?

Public notices apparently have taken on a more "in your face" political stance in New York. 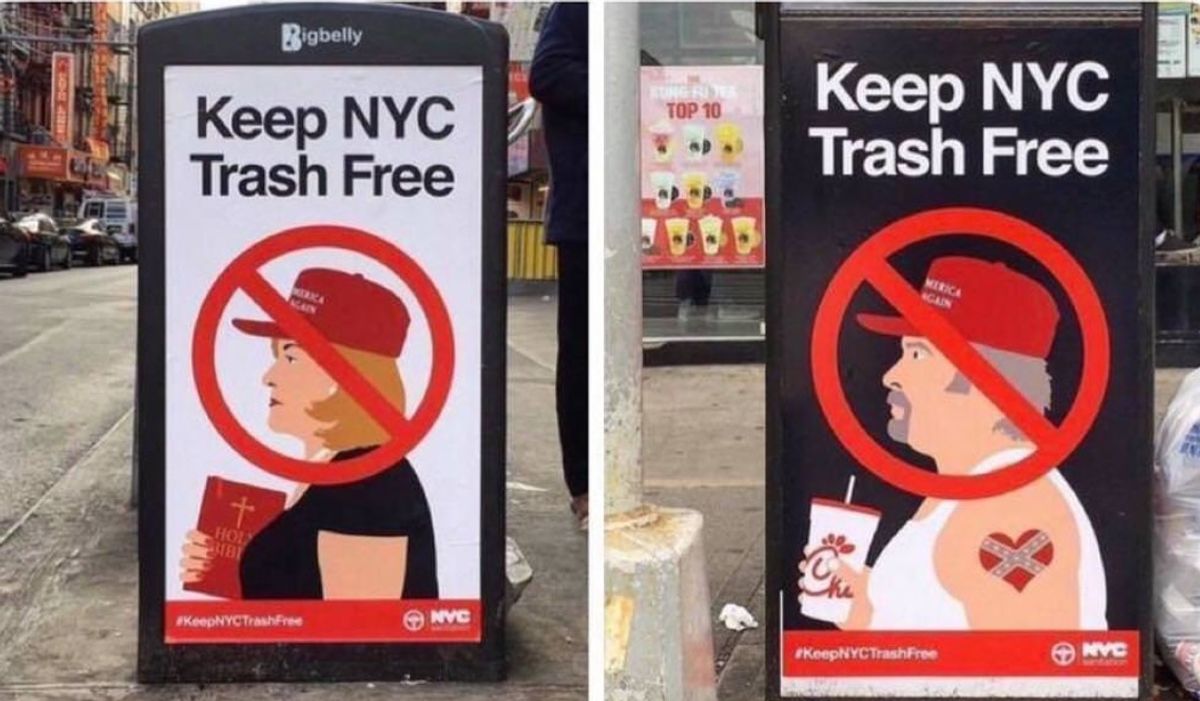 Not surprisingly, many people (in New York and elsewhere) expressed outrage that a city agency would be installing such inappropriate displays, much less funding them with taxpayer dollars:

Copies of the art were posted on the Instagram account of street artist Winston Tseng, who initially denied (somewhat unconvincingly) that he was involved in their creation or installation:

For the record, I didn’t create or put up these posters. But if I did, I wouldn’t want people to take them so seriously, since they’re meant to reflect certain parts of our society and not meant to generalize beyond those. I’d just want the intended audience of my fellow ‘classist elitist New Yorkers’ to hopefully be entertained by the ‘unhelpful, tone-deaf message’ as they go about their day in this trash filled liberal bubble.

Shortly afterwards, though, Tseng acknowledged creating the posters in an interview with the Brooklyn Street Art website and explained the motivation behind them:

BSA: So that brings us to the new series you just created and installed: Your subjects are white people only and you are calling them ‘trash’.

WT: I wouldn’t say its meant to represent all caucasians but certainly they are meant to portray a certain demographic. In this case a segment of white people that I personally believe the posters accurately reflect. The statistics are there that a lot of Trump supporters who wear the MAGA hats come from red states, from the south, and are Christian Evangelicals. Those are the concepts that I included on these posters. I didn’t make that up. I’m just reflecting something that is a quantifiable fact.

BSA: Are these posters a direct critique on Trump’s policies and ideologies?

WT: Yes. But I feel like criticizing Trump, because he kind of doesn’t seem to really believe strongly in any ideologies or policy, is not the source of the issue in my mind. The source of the issue is the segment of America who supports him and authorizes him to make the decisions that he makes. I’m not sure if he believes strongly in them or if he is just pandering and just wants to win a popularity contest amongst certain demographics. I think that there’s a lot of anti-Trump art work out there, but taking a step back one realizes that he is not doing this on his own and the same goes with the policies he announces where he just tells people what they want to hear.

BSA: What was your goal when you were creating these series?

WT: It’s always just a personal expression. I’m not one to think that I’m going to change anyone’s mind by doing this. There’s a bit of humor in it and I’m hoping that people are entertained by it. I think that the majority of New Yorkers would probably agree with that just based on the statistics of liberals versus conservatives in New York. So it’s personal expression. It is the entertaining factor. It is sort of a stress relief for me, just to get it out there.