So Wrong at the Fair 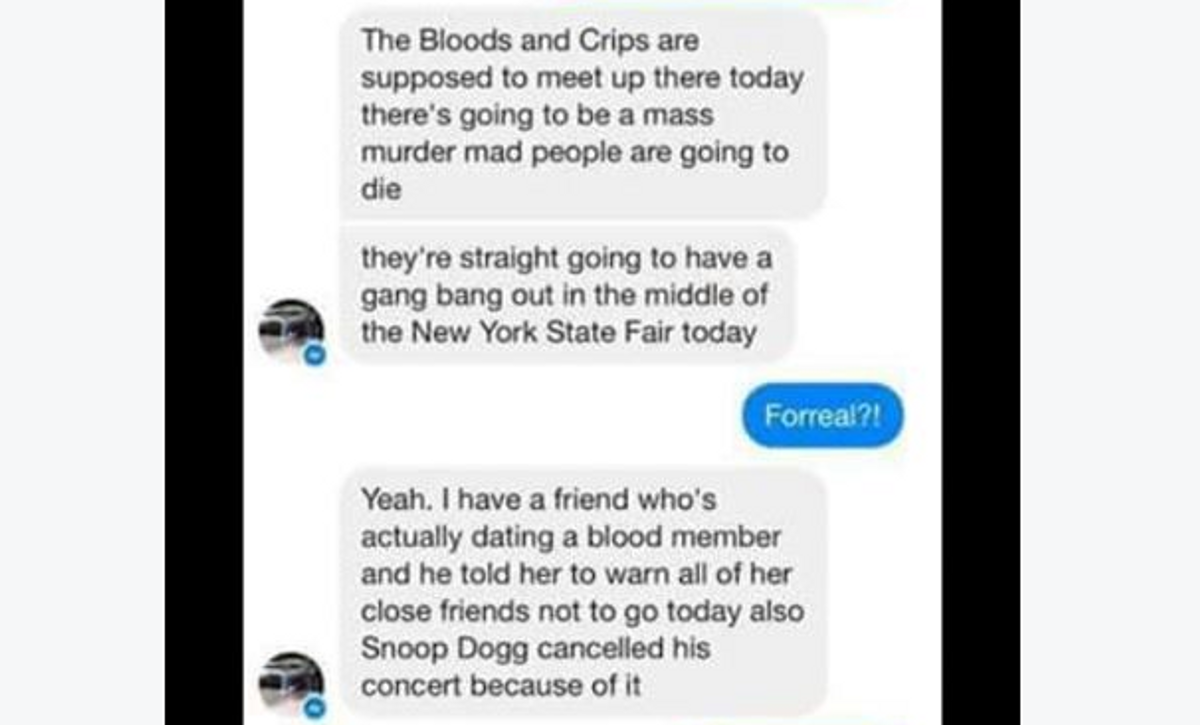 FACT CHECK: Did Snoop Dogg cancel an appearance at the New York State Fair because rival gangs the Bloods and the Crips are planning a murder spree?

Claim:  Snoop Dogg canceled an appearance at the New York State Fair because rival gangs the Bloods and the Crips are planning a murder spree.

I do not know if this is factual, but I am warning every single person attending the Fair today to BE ON ALERT! This could be an extremely life threatening event and I want everyone safe!

Praying that this is not true and that it's just a farce but it needs to be taken into account IMMEDIATELY! Origins:  On 1 September 2015, rapper Snoop Dogg canceled a performance scheduled to take place at the New York State Fair the following day, and a local web site reported that the last-minute change was due to the artist's unspecified illness:

The Fair cited illness as the cause of cancellation.

"We were advised this afternoon by management of artist Snoop Dogg that he is ill and will not be able to perform Wednesday evening at Chevy Court," said Acting Fair Director Troy Waffner. "At this late hour, we are pursuing alternatives."

Fair spokesman Dave Bullard said the Fair received word from Snoop's people around 3 p.m. that the show would be canceled.

"They let us know [he was sick] and we believe that," Bullard said.

The day of the scheduled performance, Facebook user Cody Crouse published the warning quoted above along with a screen capture of a post published by a user named Bree Hamblin. According to those messages, the true reason for Snoop Dogg's sudden cancellation was the expected outbreak of violence between rival gangs the Bloods and the Crips. (Hamblin later denied she was party to the messages, and stated they were forwarded to her by an unnamed friend.)

The messages appeared to depict a private conversation between two unidentified parties on Facebook in which the sender warns the recipient that the "Bloods and Crips" planned to meet up at the fair, resulting in a "mass murder" wherein "mad people [were] going to die." The user goes on to assert she came by the information through a friend who is dating a member of one of the gangs, concluding with the claim about Snoop Dogg's canceled gig.

After Crouse shared the screen captures to the Facebook page of the New York State Fair, several users re-shared the images with the caveat it was better to be safe than sorry (despite a marked lack of prior gang shootouts at state fairs). One of the commenters claimed New York State Troopers were "aware" of the "situation," further creating the impression of a credible threat:

My older sister just showed this to a state trooper working the fair & said they are being very selective on who they let in & are aware of the situation.

At the Fair and on social media, chatter about the "real" reason for Snoop's cancellation proliferated. Rumors swirled about gang threats, police interference and even a "hit" on Snoop.

Waffner dismissed those rumors. He said Triangle Talent reached out to make sure the rapper really was sick.

"The rumors swirling about Snoop Dogg and a hit, nobody could find any real backbone to that," he said. "Those rumors come up whether it's about a rap artist or a Hank Williams show. We've had rumors about urban gangs or the Hell's Angels showing up. We check them out to see if there's any merit."

Waffner said the Fair was in regular communication with state police and the Syracuse police gang units to follow up on such rumors and determined them all to be unfounded.

New York State Police spokesman Jack Keller confirmed there was no evidence of a credible threat of gang violence at the Snoop concert at the Fair. He also said there was no increased police presence.

That rumor wasn't the only one in circulation speculating about Snoop Dogg's cancellation:

Claims about expected gang violence at the New York State Fair were unsupported by any credible evidence. Moreover, there was no reason to suspect that law enforcement wouldn't step in to prevent the rumored activity had solid information been received by Snoop Dogg (or anyone else) to suggest caution was warranted.