Did the NRA Ask Judicial Candidates for 'Position Letters' on Guns?

The National Rifle Association's letters to Wisconsin judicial candidates came under scrutiny in the wake of a mass school shooting in February 2018. 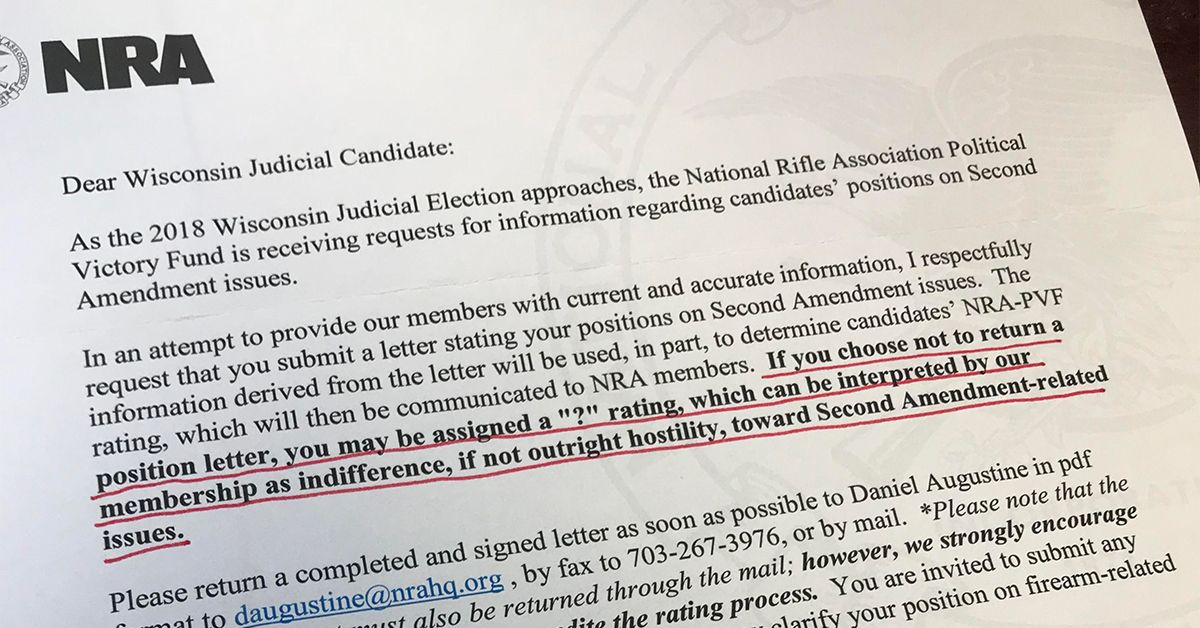 Courtesy of Tim Burns for Wisconsin

Claim:
The NRA sent Wisconsin Supreme Court candidates a letter urging them to submit a "position statement" on gun rights, or risk opposition from NRA members in the state.
Rating:

In the aftermath of the 14 February 2018 mass shooting at a high school in Parkland, Florida, gun rights activists and lobbyists, in particular the National Rifle Association (NRA) have come under renewed scrutiny.

In this context, influential gun control advocates shared a letter that, to some, exemplified the influence of the NRA over candidates for political office. On 18 February, the actor and activist Alyssa Milano tweeted a copy of a letter purportedly sent by the NRA to Tim Burns, a candidate for Wisconsin Supreme Court judge.

If you live in #Wisconsin, please vote for @Burns4WI this Tuesday February 20th.

Tim Burns is a #Progressive #Democrat for WI Supreme Court.

Tim received the below letter from the NRA. We can no longer allow the #NRA to bully candidates in this country. #NoRA pic.twitter.com/pV76SWiJwZ

The letter is real. The NRA sent it out a few weeks before the school shooting at Marjory Stoneman Douglas High School. In it, the NRA asked candidates for the Wisconsin Supreme Court to submit a position letter outlining their stance on guns, which the NRA would condense and distribute to its members in the state.

If you choose not to return a position letter, you may be assigned a "?" rating, which can be interpreted by our membership as indifference, if not outright hostility, toward Second Amendment-related issues.

Burns's spokesperson told us they shared a photograph of the letter with a network of contacts, and that it reached Milano, who asked the Burns campaign for permission to share the letter on Twitter.

The NRA letter was addressed "Dear Wisconsin Judicial Candidate," suggesting that it was sent to all three candidates in the 20 February 2018 primary election. We sought confirmation of this from the other two — Judge Rebecca Dallet and Judge Michael Screnock -- but we did not hear back from them in time for publication.

Although the primary was officially nonpartisan, Burns and Dallet appealed to Democrats, while Screnock garnered support from the Republican party.

Both Screnock and Dallet made it through the primary, and will now be on the ballot for the 3 April 2018 general election to the Wisconsin Supreme Court. Tim Burns failed to make it to the next round.