Did Nostradamus Predict the World Will Fall After a 'Feeble Man' Rules?

Nostradamus has been credited with accurately predicting dozens of historical events. 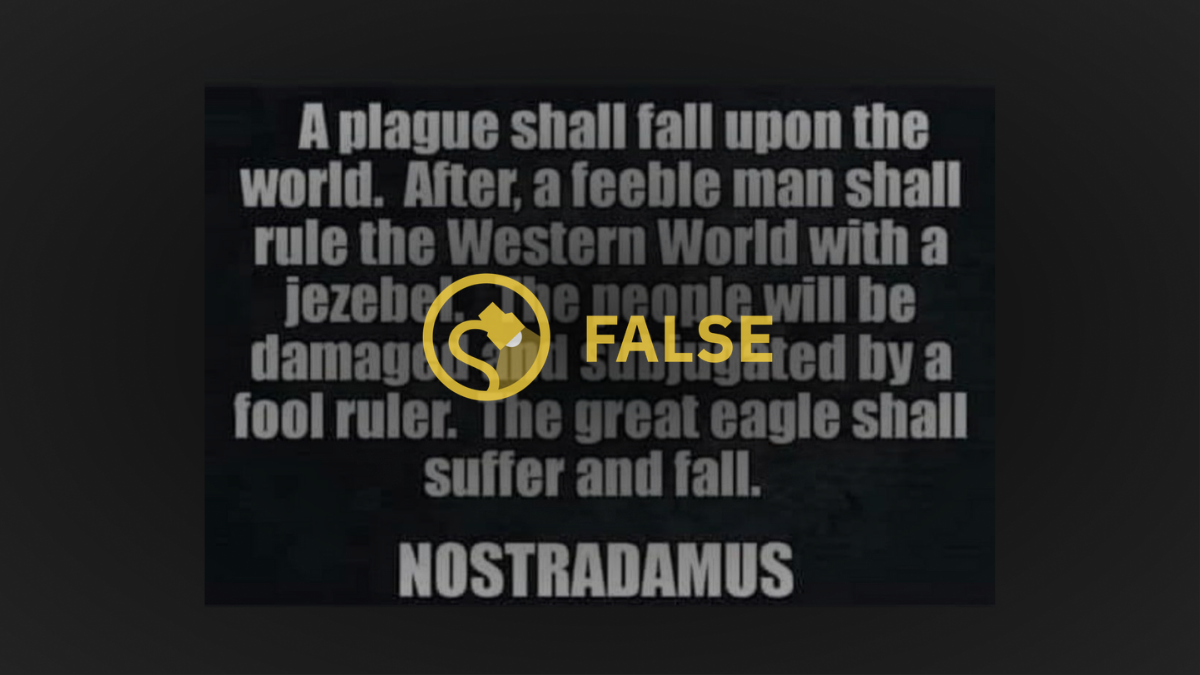 Claim:
A poem written by a French astrologer claimed that the western world "will fall" after a “feeble man” and a “jezebel” took over as rulers.
Rating:

A four-line poem, also known as a quatrain, allegedly written by 16th-century philosopher Michel de Nostradamus described predictions of a future “plague” that would “fall upon the world.” (Some assumed that this so-called plague referred to the COVID-19 pandemic, which Snopes has previously debunked here.)

The alleged quatrain went on to describe a “feeble man” who was set to “rule the western world with a jezebel” after the plague. According to Snopes readers, renditions of this poem appeared to suggest that this man and jezebel either referred to U.S. President Donald Trump or President-elect Joe Biden, depending on the person sharing the poem. In the end, this “fool ruler” will cause the “great eagle” — presumably the United States — to “suffer and fall.”

The below meme circulated in early 2021: It is unclear where this quatrain originated from or who the original poster was. Nostradamus, who was also a French physician, first published Les Prophéties in 1555. It is thought that his collection of poems, which are compiled in 10 sets of verses of 100 quatrains each, contain mythological and astrological predictions for the future world. In the centuries that followed his original publication, he has remained prominent in modern popular culture, often among internet users who share fabricated predictions falsely attributed to him.

Nostradamus is credited with accurately predicting many historical events, according to Rare Books Digest. And though many of his poems are largely vague and could apply to a number of events, some of his predictions do come eerily close to actual events.

But the meme in question does not appear to make that list. A look through The Compleat Works of Nostradamus did not reveal any mention of a “jezebel” or a “feeble man.” And though the word “plague” was mentioned more than 30 times in the Nostradamus text, there is no instance where it occurs alongside the same wording as in the meme.

Furthermore, it is also important to note that the quatrains written by Nostradamus do not follow chronological order. So, while they may be broken down into what the author considered to be “centuries,” these do not directly translate to the century in which any prediction was anticipated to occur.