Did Nostradamus Predict Charles Would Abdicate, Leave Harry the Throne? 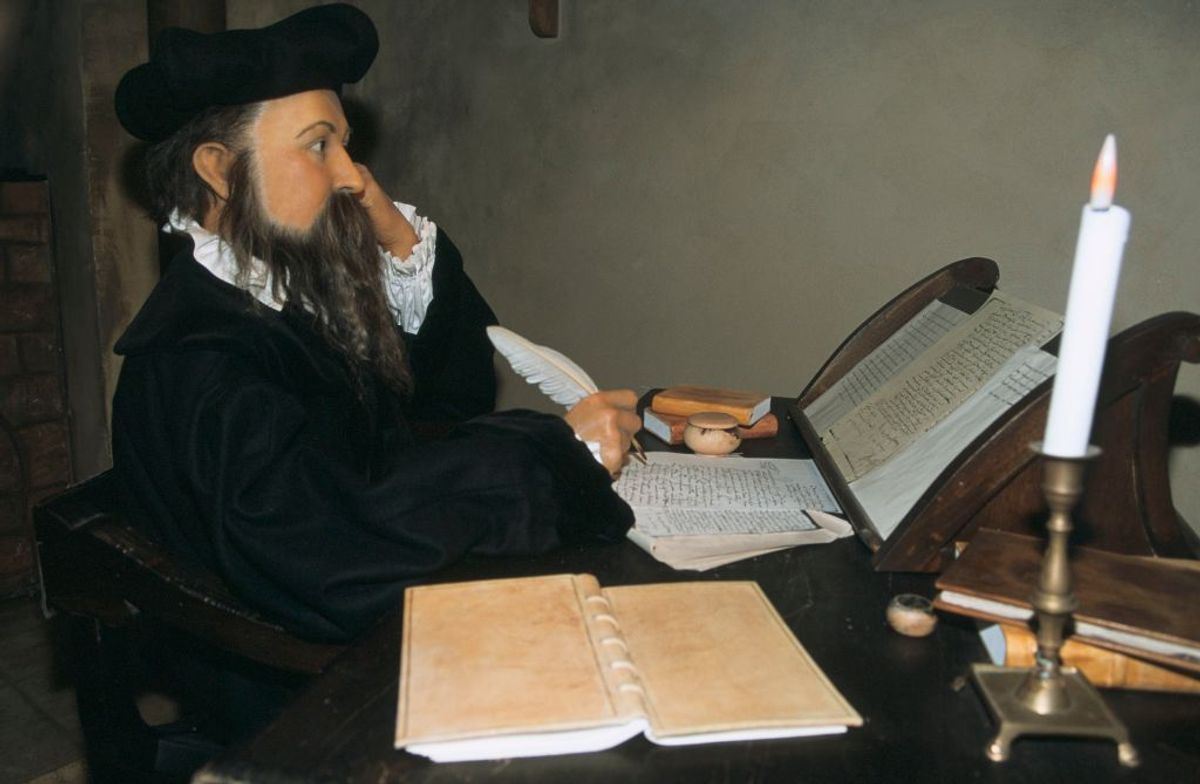 Claim:
Nostradamus predicted that Queen Elizabeth II would die in 2022 and King Charles III would abdicate, leaving the throne to Prince Harry.
Rating:

In the wake of the passing of Queen Elizabeth II on Sept. 8, 2022, various hoaxes and misinformation circulated online.

These included a misleading claim that the supposed source of many a prophecy, Nostradamus, foresaw the year Elizabeth would die, and that her heir, King Charles III, would abdicate, leaving an unexpected royal on the throne.

Nostradamus is the commonly used name of Michel de Nostredame, a 16th-century Frenchman best known in the modern era for being trotted out during global news events, with enthusiasts claiming he predicted them with uncanny accuracy. Nostradamus was falsely credited with predicting the Sept. 11, 2001, terrorist attacks in the U.S., for example, and also the 2003 Columbia space shuttle disaster.

In the case of misinformation spreading in September 2022, not only did some claim he predicted with accuracy the year in which Elizabeth would die, but also that he foresaw the crowning of Prince Harry as king. Neither is true, as we will explain.

"A shocking new interpretation of the prophecies of Nostradamus says that King Charles’s reign could be very short with the bombshell suggestion Prince Harry could take the throne," reported the U.K. tabloid The Daily Star.

Meanwhile, many shared on social media a screenshot from the 2005 book, "Nostradamus: The Complete Prophecies for the Future," by British author Mario Reading. Here is an image of the screenshot being posted:

We point to the words"new interpretation" in the Daily Star's article because it's the operative phrase. The source of the rumor is simply Reading's interpretation of material written by Nostradamus, as seen in the screenshot from his book above. Nostradamus made no predictions specific to British royalty in 2022.

The idea that Harry, the second son of then-Prince Charles and Princess Diana, would leapfrog over his older brother William and become king can be seen at the bottom of the page in the image above. The reason it drew so much attention was because Reading, who died in 2017, appears to have accurately speculated about what year Elizabeth would die.

“The preamble is that Queen Elizabeth II will die, circa 2022, at the age of around ninety-six, five years short of her mother’s term of life,” Reading wrote.

But Reading also erroneously predicted, based on Nostradamus' writings, that when Charles took the throne, the Commonwealth — an international association made up of nations like Canada and Jamaica, most of which were once under British rule — would no longer exist. That is not the case.

Reading went on to interpret Nostradamus as predicting that when Charles took the throne, the pressure on him, together with his advanced age and opposition from some Brits who were angered by his 1996 divorce from Diana, would be overwhelming. And that would lead him to vacate his role.

Reading claimed Nostradamus "makes it very clear" that the man to replace Charles will be an unexpected one. Reading guesses that means William won't take the throne, for whatever reason, and that the next in line would be Harry.

This was all speculation, however. Reading included the writing of Nostradamus (called a quatrain) at the top of his chapter. But Nostradamus' writing is vague, and makes no mention of a specific country or ruler. Here is a screenshot from the Google Books version of Reading's work, in which he offers the quatrain and his translation into English:

Because the actual writing of Nostradamus is vague, we cannot say Nostradamus predicted the circumstances around Elizabeth's death, and we can hardly say he foresaw events that haven't yet happened (and may well never happen). At the very best, we can say that British author Mario Reading accurately guessed the year that Queen Elizabeth II would die.

A note of context: Europe's kings and queens during the life of Nostradamus were contextually very different than the U.K.'s modern royals. If King Charles III "abdicates," it wouldn't exactly spark a bloody power grab, as illustrated by the gory HBO series "Game of Thrones," which is loosely based on medieval power struggles. Modern day royalty in the U.K. is more of a formality than an actual seat of power. It would be an intrigue, no doubt, but would probably have little consequence in the daily lives of U.K. citizens.