Will Voting in North Dakota Result in the Loss of Hunting Licenses from Other States?

An ad promoted by the North Dakota Democratic Party made a dubious claim about voters' losing out-of-state hunting licenses. 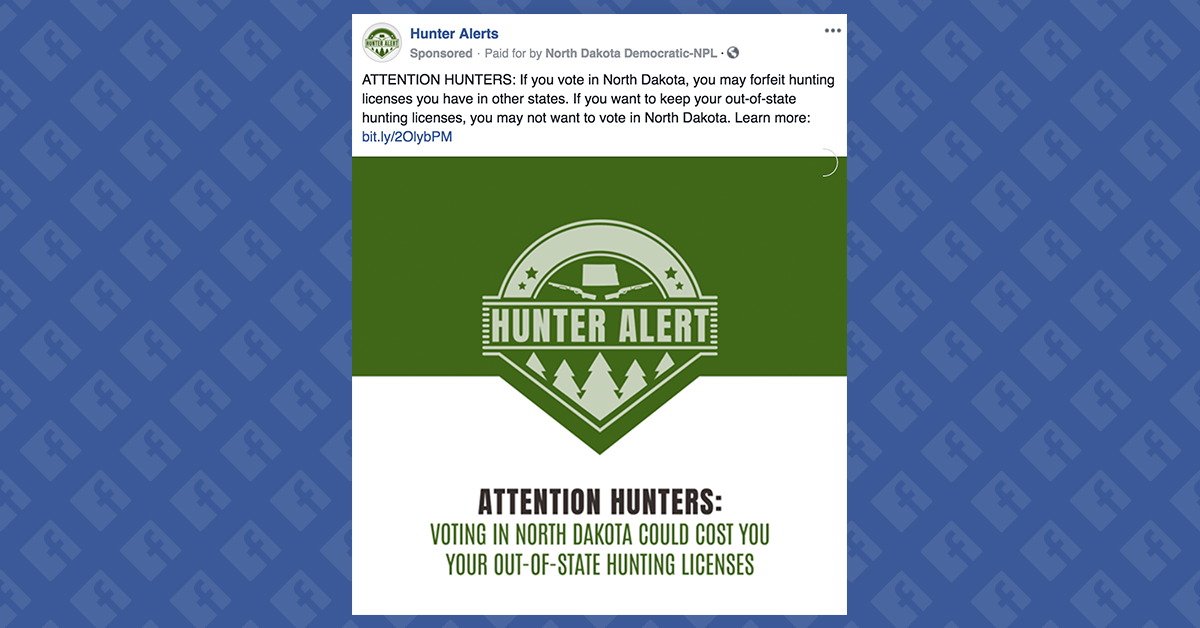 Claim:
By voting in North Dakota, residents risk losing hunting licenses issued to them by other states.
Rating:

On 31 October 2018, the Facebook page “Hunter Alerts” was born, garnering just 40 followers in its first week of existence. So far, all that page has been used for is the distribution of two political advertisements asserting that “If you vote in North Dakota, you may forfeit hunting licenses you have in other states. If you want to keep your out-of-state hunting licenses, you may not want to vote in North Dakota": Those ads were promoted by North Dakota’s Democratic party (known as the Democratic-Nonpartisan League, or Democratic-NPL) and linked back to that party’s website with a slightly more detailed explanation of the claim:

This statement, which was misleading for several reasons (enumerated below) and was provided with no additional information, citations, or exposition, was characterized by many critics as an attempt to suppress conservative votes in North Dakota because it targets a demographic (i.e., hunters) who traditionally lean conservative. (North Dakota also faces allegations of voter suppression efforts that target the more Democrat-friendly Native American population in that state.)

Both the North Dakota Secretary of State and the North Dakota Game and Fish Department (NGFD) have told reporters they do not know what the ad was talking about. An NGFD representative told us via email that they “cannot explain [the ad] and we have no desire to try to sort it out for [the Democratic-NPL]. We have had no involvement in the post.”

The most generous interpretation of the Democratic-NPL statement would be that the act of voting in North Dakota, because it requires a state-issued North Dakota ID, means voters would necessarily be forfeiting claims to residency in any other states. Many states offer both resident and non-resident hunting licenses, with the former coming at a cheaper cost but with proof-of-residency requirements. If, as the Democratic-NPL seemed to be arguing, one somehow obtained a resident hunting license in another state but actually lived and voted in North Dakota, that other state could revoke their license if they found out you had declared residency somewhere else. (The Democratic-NPL declined our request for comment).

Not only was this scenario far more specific than what was implied by the two-sentence statement promoted by the Democratic-NPL, but it also suggested an unrealistic level of inter-state bureaucratic communication whereby one state’s hunting licensure board actively communicated with the ID-granting offices in every other state to make sure no one was receiving unwarranted license discounts. In most (if not all) cases, it was also simply inaccurate. As an example, we will present a scenario under which a Wyoming resident legally obtains a resident hunting permit in that state and then moves and legally obtains residency (and therefore voting rights) in North Dakota.

In Wyoming, you must have resided in that state for at least one year, and during that time period you must not have been claiming residency for any other purpose in any other state (emphasis ours):

To qualify for any resident game and fish license, preference point, permit or tag, a person shall be domiciled and shall physically reside in Wyoming for one (1) full year (365 consecutive days) immediately preceding the date the person applies for or purchases the license, preference point, permit or tag and the person shall not have claimed residency elsewhere for any other purpose (including, but not limited to, voting, payment of income taxes, purchase of resident hunting, fishing or trapping licenses, etc.) during that one (1) year period.

While several states stipulate you can no longer be considered a resident if you register to vote somewhere else, the requirements to receive a resident hunting license in Wyoming and most other states is retrospective and not prospective. If a hypothetical Wyoming resident switched jobs and moved to North Dakota to work, their Wyoming hunting license would already have been issued, and the State of Wyoming would likely have no idea that person had moved. All that would be required for that individual to become a valid North Dakota voter would be for that person to have maintained a residence in the state for 90 consecutive days and to have obtained an ID card or driver's license from North Dakota's Department of Transportation.

By not providing those supporting details, the ad does nothing to correct the false notion an already legal North Dakota voter (i.e., one already in possession of a state-issued ID) could put the legality of their theoretical out-of-state hunting licenses in jeopardy by going to the polls. The fact that this ad was released less than a week before the election also speaks poorly of its legitimacy.

The argument presented by the Democratic-NPL is based on a highly implausible scenario that has state hunting licensure boards actively and continually communicating with other state’s DOT or DMV offices and would relate only (if at all) to a population of people who have claimed to be residents in other states for the purpose of obtaining discounted resident hunting licenses. Even then, it would not be the act of voting that theoretically put out-of-state licenses at risk, but the act of obtaining the state-issued ID required for voting.