Does This Photograph Show Nolan Ryan Pitching After an On-Field Fight? 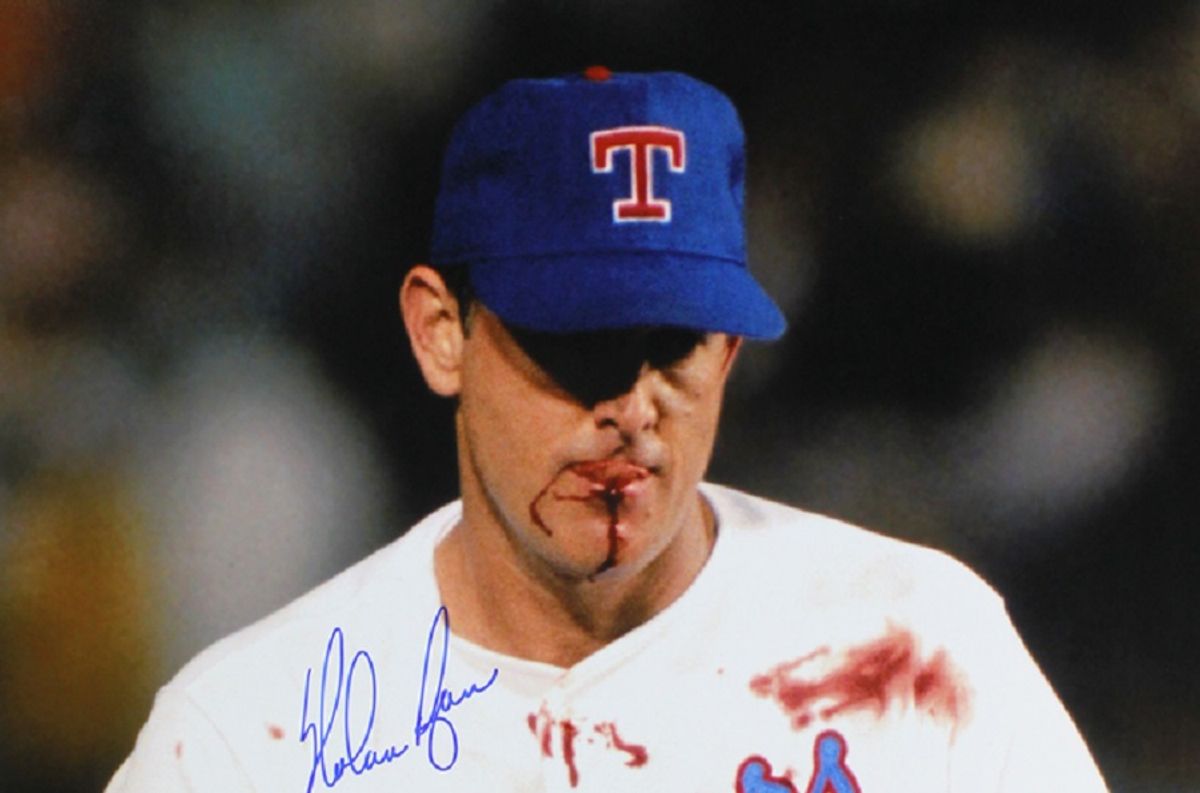 Claim:
A photograph shows a bleeding Nolan Ryan pitching in the aftermath of an on-field fight with Robin Ventura.
Rating:

In terms of durability, pitcher Nolan Ryan ranks among the top echelon of everyone who has ever played Major League baseball. Not only did his career span 27 seasons, but he was still throwing fastballs in the 100-mph range well into his 40s. When Ryan retired from the sport at the age of 46, he had racked up not only 324 wins, but also lifetime records for most strikeouts (5,714) and most no-hitters (seven). However, one of the most enduring and iconic images of Ryan stems not from his record-setting achievements, but from an on-field brawl that occurred at the tail end of his playing days.

On Aug. 4, 1993, in one of the last handful of games that Ryan ever played, he plunked Chicago White Sox third baseman Robin Ventura on the back with a pitch. An incensed Ventura took a few steps towards first base and then dropped his bat, threw down his helmet, and charged at the pitcher's mound. Despite the 20-year difference in their ages (Ryan was 46, Ventura just 26), Ryan stood his ground, grabbed Ventura in a headlock, and hit Ventura in the head multiple times with his fist:

This, then, is one of the most enduring images of Ryan's long career — the Texas Rangers pitcher pummeling a head-locked Ventura, while his catcher, Iván Rodríguez, tries to intercede in the scuffle: But there's another enduring — and even tougher — image of Ryan out there, one that shows him preparing for his next pitch in a blood-spattered uniform, with rivulets of blood running down from his mouth: This picture of what looks like a vampire who just broke off from a snack to come in and throw an inning or two of relief is often touted as a testament to Ryan's no-nonsense, workmanlike approach and dedication to pitching — the personification of the "old school" baseball maxim that "if a bone ain't showin'" you shake off an injury, stay on the field, and play through it.

Although this photograph is undeniably real, its common association with the Ryan-Ventura fight is erroneous. No blood was spilled in that brawl, and this picture was not taken in the aftermath of that scuffle — rather, it stemmed from a different incident that had taken place three years earlier.

In the second inning of a Sept. 8, 1990, game between Ryan's Texas Rangers and the Kansas City Royals, designated hitter Bo Jackson of the Royals smacked a sharp one-hopper back to the mound that Ryan wasn't able to field cleanly. The ball deflected off the pitcher's glove and hit him in the face, opening a two-inch gash in his lower lip that required six stitches to close after the game:

Nonetheless, Ryan calmly picked up the ball, threw Jackson out at first, and resumed pitching without leaving the field, seeking assistance from the team trainer, or even toweling the blood off his face. Ryan threw seven innings of shutout ball that evening before finally coming out of the game with a 1-0 lead after walking the leadoff batter in the eighth inning.

Although the Rangers eventually won the game, credit for the victory went not to Ryan but to Texas relief pitcher Kenny Rogers:

Nolan Ryan didn't know which hurt worse — getting hit in the mouth with a batted ball or pitching a three-hitter for seven innings and not getting win No. 303.

"Neither one was very pleasant," baseball's all-time strikeout and no-hit king said after the Texas Rangers edged the Kansas City Royals 2-1 last night on Rafael Palmeiro's run-scoring double in the bottom of the ninth.

"I've had line drives off my head. Pitch as long as I have and a lot of things happen to you," Ryan said. "But I never got one square in the mouth, never had one cut me where I had to be stitched up."

The injury occurred in the second inning when Bo Jackson's sharp one-hopper caromed off Ryan's glove and split his lower lip, which required six stitches after the game.

Despite the injury, he kept pitching, striking out eight. He was relieved by Kenny Rogers after walking Bill Pecota to start the eighth with a 1-0 lead.

Ryan said the injury "wasn't really ever a factor" in his coming out. "It was so humid ... that had more of a bearing. Whatever happens during the game, you have to put out of your mind. It did take me a couple of hitters to get my rhythm back."

It shook him up," Manager Bobby Valentine said. "He was mad he didn't catch the ball. That was a 2-inch-wide cut."