Are No Two Snowflakes Exactly Alike?

Your elementary school teachers weren't lying to you -- this oft-repeated phrase is correct, but it is likely applicable to almost anything larger than a single atom. 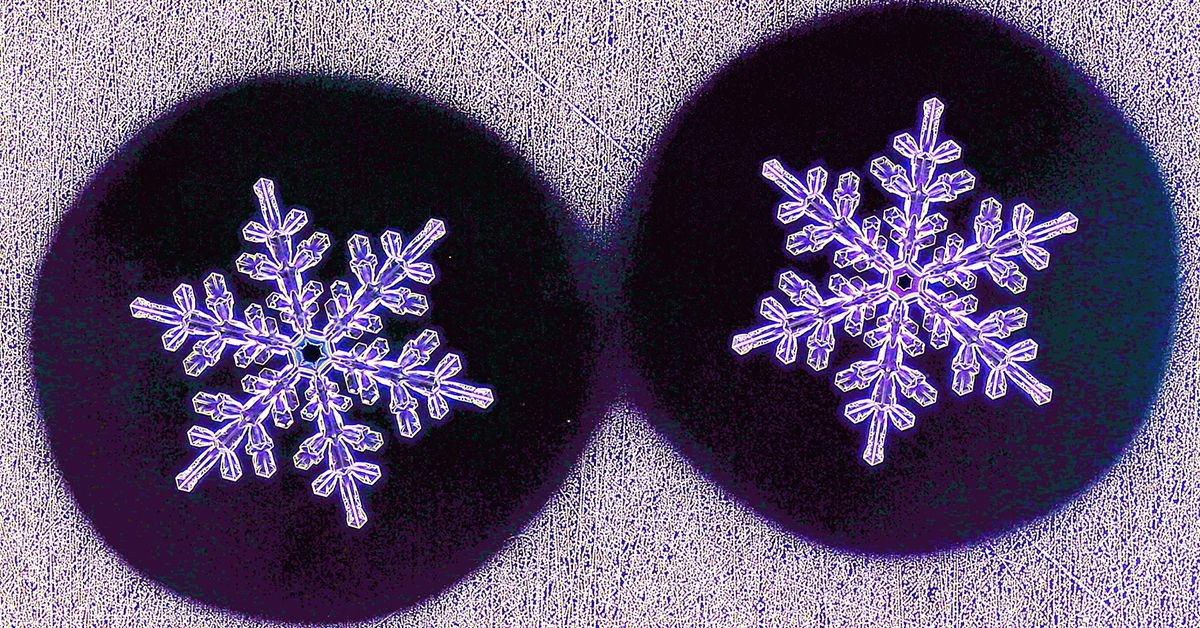 The phrase "no two snowflakes are exactly alike” sparks wonder in the hearts of children everywhere — but what does science say about this oft-repeated truism? In short, that scale matters when making claims about how similar two objects might be.

At the visual level, with expensive laboratory equipment, you can create snowflakes that look pretty much identical. At the molecular level, the chance of two identical snowflakes is so astronomically low that it is considered impossible.

How Do Snowflakes Form?

On his web site, Kenneth G. Libbrecht, the Chairman of the Physics department at the California Institute of Technology and a well-known snowflake photographer, explains that inside a cloud, small changes in the microenvironment around a snowflake influence its form. That's because these changes force the snowflake to shift between two different crystallization processes — faceting and branching.

Faceting, the simpler of the two processes, produces six-sided prisms thanks to the atomic structure of frozen water molecules. The formation of these hexagonal prisms gives snowflakes their famed six-sided symmetry. Branching produces the chaotic features that extend away from the growing hexagonal prisms; branching happens because the corners of those prisms attract crystalizing water vapor more quickly than the flat surfaces: As it tumbles through the clouds, the crystal experiences ever changing temperatures and humidities, and each change makes the arms grow a bit differently. The exact shape of the final snow crystal is determined by the precise path it took through the clouds. But the six arms all took the same path, and so each experienced the same changes at the same times.

Using precisely-controlled temperature and humidity conditions in his Caltech lab, Libbrecht has created many “designer snowflakes," and can even control the final shape to some extent. Using this technology, he has generated what he calls “identical twin” snowflakes like this: Leibrich told by email that he describes these similar-looking flakes as “identical twins” because, like human twins, “they are clearly quite similar in appearance, but they are not *exactly* identical.” While qualitatively similar looking, that similarity would break down once you begin looking on a smaller and smaller scale. Libbrecht said:

Visually, under the microscope, you could say they are essentially identical. But if you look at the molecular level, they are far from identical. So if you want to talk about identical snowflakes, you have to define exactly what you mean by identical.

It is therefore conceivable that two snowflakes look identical, but that is a far cry from being identical at the molecular level. The concept of two snowflakes being “alike,” then, relies on how the term is defined.

What’s Going On At The Molecular Level?

At the molecular level, the probability that two flakes formed identically is mathematically impossible given the effectively infinite number of ways to create a snowflake, Liebrich told us:

The number of possible ways to arrange the branches and side branches is far, far, far greater than even the total number of snowflakes that have ever fallen on Earth.

On top of the impossibility of two completely identical microenvironments for two snowflakes to grow outside of the lab, the chemical building blocks that make up the snowflake are not likely 100 percent identical either. That’s because in nature there is a small fraction of oxygen and hydrogen isotopes that are slightly heavier than their more common form. The idea that the anomalous water molecules made up of these heavier atoms could exist in the same place in two different flakes is both impossible to demonstrate and unreasonable to assume.

What Does It Even Mean To Be Identical?

This claim is popularly referred to as “Leibniz’s Law” and it has been a vigorously debated philosophical question, in various forms, for centuries. While the concept would apply to anything considered an object, snowflakes provide an attractive way to illustrate the implausibility of truly indistinguishable objects because, despite the fact that they are all constructed from water molecules, each snowflake individually produces extremely intricate and complex patterns.

Visual similarity between snowflakes can only be superficially achieved under extremely controlled laboratory conditions. As such we rank the claim that no two snowflakes are exactly alike as true.

Forrest, Peter.   "The Identity of Indiscernibles."     The Stanford Encyclopedia of Philosophy.   Winter 2016.