No, Obama Wasn't Guarded by a Reptilian Secret Service Agent 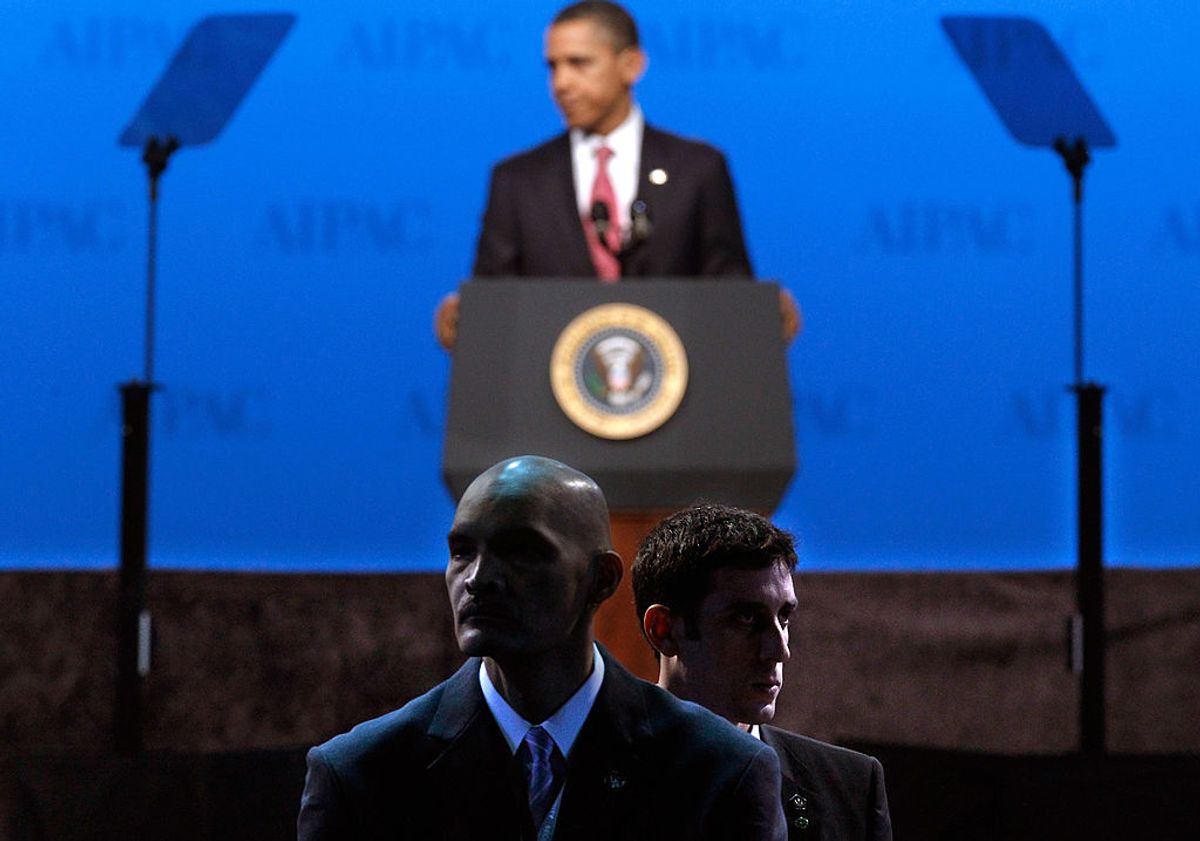 There's a saying that the internet never forgets, and that's certainly true of old conspiracy theories that refuse to die. One such example is a video of a bald U.S. Secret Service agent with strong bone structure who conspiracy theorists since 2013 have accused of being a reptilian shape shifter.

The video, as of this writing, is nearly a decade old. It stems from a speech given by former U.S. President Barack Obama in 2013 at a March 4, 2013, policy conference held by the lobbying group American Israel Public Affairs Committee, also known by its acronym AIPAC. In the video, conspiracy theorists zoom in on the Secret Service agent and accuse him of being a reptile, which could not have helped that individual's self-esteem.

The conspiracy theory cropped up in December 2022 in a widely viewed Instagram video:

"This was the day that the government was caught with a reptilian Secret Service agent in HD and they didn't deny anything," the video's host intones.

But the video and underlying conspiracy theory — that the U.S. government hid a reptilian man in plain sight but also tried to hide that it did so— is of course contradictory and relies on a well-worn conspiracy theory about shape-shifting lizard people.

It raises such obvious questions as: If the government was trying to hide its reptilian agents, why put one in a highly visible position at a televised event? If reptilians are capable of shape-shifting to look like humans, why not just shape-shift into something less obvious, like a table or chair? Do shape-shifting reptilians get full pay and benefits as government employees?

Is It True the Government 'Didn't Deny' Its Reptilian Employee?

In the Instagram video, the host claims that the government "didn't deny anything" about the claim that a reptilian was guarding Obama during his 2013 AIPAC speech. This claim is based on a screenshot of a March 2013 story published by technology news site Wired. The story contains a tongue-in-cheek quote from Caitlin Hayden, spokeswoman for the National Security Council, in which she refers to Obama-era budget cuts referred to as sequestration:

I can't confirm the claims made in this video, but any alleged program to guard the president with aliens or robots would likely have to be scaled back or eliminated in the sequester, I'd refer you to the Secret Service or Area 51 for more details.

In the context of the Wired story, that response was not so much a lack of denial as an unserious response to an unserious question. Wired was asking the White House about shape-shifting aliens guarding the president, after all. And the article concludes with this deadpan paragraph:

But still: alien guards. They've gotten a raw deal through the sequester. The White House didn't clarify if its reptilian Secret Service agents are subject to the furloughs without pay affecting federal employees. But say this for the automatic budget cuts: They may have prevented Obama from falling into the clutches of an intergalactic conspiracy -- that is, if the president wasn't in on it from the start.

In other words, the White House's response can't be read as a refusal to deny, but instead seems to fit with the overall sardonic tone of the Wired piece. It was an attempt at humor over an outlandish claim that some have since taken seriously.

Was the Video Taken Down in a Cover Up?

The Instagram host claims that he "literally looked for the video everywhere and couldn't find it, the only place it exists now is Reddit," referring to the popular message board-style social media platform.

The video hasn't been taken down. It may no longer be available in old news stories about it, like the Wired story, perhaps because the story is now almost 10 years old and hasn't been updated. But the video is still available on YouTube, and also, clearly, Reddit, and on the Instagram post. If the government is trying to hide the video it is doing a very inadequate job.

Is the Secret Service Agent a Reptilian?

The "reptilian" conspiracy theory has been floating around for years, with one of its more prominent promoters being David Icke. The conspiracy theory posits that a race of reptilians is secretly controlling the world, pulling the strings in major human atrocities like the Holocaust. Icke, who is English, has been barred from holding events in countries like the Netherlands and Germany over anti-Semitic conspiracy theories.

There is no basis for this claim about the Secret Service agent, and he isn't a member of a reptilian race — he simply appears to be tall and slender and with a strong facial bone structure. Although the Instagram video claimed he had "green" skin, there is no evidence that any such tint was present in real life, as opposed to an effect created by lighting, the camera, or even editing.

Aside from the conspiracy theory about reptilian shape-shifters controlling the world, the idea of human-like creatures with reptile features is a common scientific trope. For example, the original "Star Trek" series featured a reptilian race called the Gorn.