Rumors of a dangerous fad known as the "No Lackin Challenge" circulated after a Memphis teenager was accidentally shot in the head. 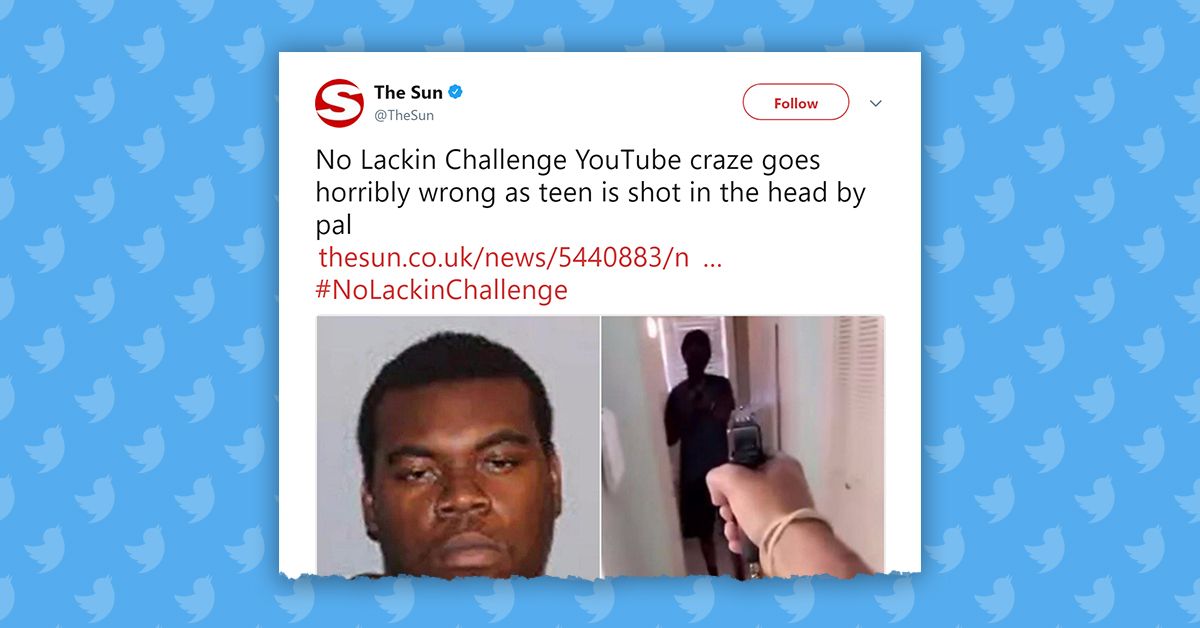 Claim:
Teenagers are participating in a dangerous new internet craze known as the "No Lackin Challenge," and two teenagers was shot in the head during an instance of the fad gone awry.
Rating:

In late January 2018, multiple news outlets and blogs reported that a fad called the "No Lackin Challenge" had led to the accidental shooting of a 17-year-old boy in Memphis, although early local reports of the incident hadn't referenced a connection to the supposed challenge fad:

No Lackin Challenge YouTube craze goes horribly wrong as teen is shot in the head by palhttps://t.co/3sr1QaY25W #NoLackinChallenge pic.twitter.com/wXBq7qdf5Q

The "No Lackin Challenge" fad reportedly involves participants' drawing guns on one another, with the term "lackin" being a purported Chicago-area colloquialism defined as being caught without a firearm. "No Lackin" therefore means one is ready for any situation or confrontation.

Memphis television station WMC reported that the 17-year-old Memphis youngster had been "shot in the head" at a cafe while he "and a friend were playing with a handgun [that] went off by accident." Another Memphis station, WREG, similarly reported that the gun went off accidentally while "kids" were "playing" with it and showing it off:

[P]olice say a 17-year-old boy was accidentally shot in the head, while he and his friends were playing with a gun.

"All young kids," said Ron Eanes, area manager at E's Cafe. "They were sitting there talking, and they started showing each other a gun and it accidentally went off."

Subsequently, USA Today referenced the "No Lackin Challenge" in their reporting of the shooting:

[Sherman] Lackland was sitting in a booth at the restaurant with the victim and another friend playing the "No Lackin Challenge" when police said Lackland accidentally shot the teen in the right side of his head with a .40-caliber gun, according to an arrest affidavit.

Lackland gave police a statement and told investigators they were playing the game and the shooting was an accident. He was later arrested and charged with aggravated assault, reckless endangerment, and unlawful possession of a weapon.

As the incident became associated with the No Lackin Challenge, interest in the story spread to national and international sources. But increased interest in an activity following news reports about it doesn't doesn't necessarily demonstrate that the activity is a "fad" gaining in popularity, or that it had previously been popular.

A Google search on the term "No Lackin Challenge" restricted to material published prior to reports of the 25 January 2018 shooting produced sparse results, consisting primarily of misdated links pertaining to the incident in Memphis along with three YouTube videos dated 27 September 2017, 7 October 2017, and 14 December 2017 (although these clips often depicted individuals armed with what were clearly toy weapons). Although two of the three videos had tens of thousands of views, the "No Lackin Challenge" did not appear to be widespread or popular at that time.

If there were indeed a social media trend by that name, very few people apparently searched for it online as the "No Lackin Challenge." Google Trends data showed a small spike in searches on that term around the time the September 2017 video was published and then a massive uptick after the Memphis shooting hit the news:

It was nearly a full year later that a second instance of injuries (fatal in this case) supposedly resulting from the No Lackin Challenge was reported:

An 18-year-old is now facing charges for allegedly shooting his friend in the head, killing him as they played the 'No Lackin Challenge.'

After a police investigation into Johnson's shooting, 18-year-old Mohamad Alajil was charged with second degree manslaughter.

According to prosecutors, Johnson and Alajil were in Johnson's bedroom playing the 'No Lackin Challenge.' The two were reportedly pointing loaded weapons at each other.

When Alajil stretched out his arm and pointed the pistol at Johnson's head, the trigger was pulled, and the gun went off, striking him in the head, authorities allege.

Alajil allegedly made no attempt to call police. When they interviewed him, he initially told investigators he and Johnson had been fighting and he shot the teen in self-defense. Later Alajil changed his statement, and told officers about the 'No Lackin Challenge.'

In both cases it's difficult to determine whether the teenagers involved were truly engaging in a "challenge" activity distinct from simply unsafely playing with loaded guns that accidentally discharged.