We reached out to the Better Business Bureau to learn more. 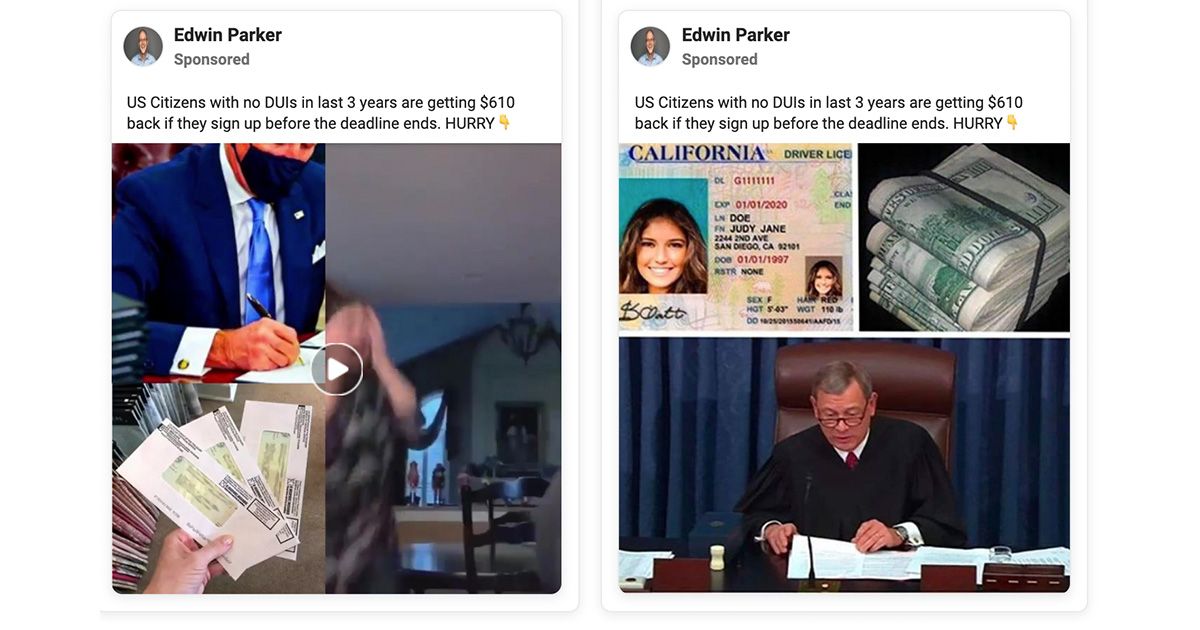 Claim:
The government passed legislation to give a refund check to drivers who recently went without a DUI or traffic tickets.
Rating:

Since at least 2020, various Facebook and Instagram ads claimed that U.S. citizens with "no DUIs in the last 3 years" could receive $610, $622, $710, or $712 as a government refund check, perhaps as part of a stimulus plan, if they simply entered their ZIP code into a form.

For example, one video ad showed U.S. President Joe Biden signing a piece of paper and another person holding checks that appeared to resemble the design used by the U.S. Treasury. It also included a clip of a family celebrating something they saw on their computer. The video of the family celebrating likely had something to do with the girl in the video being accepted to a college. It's unclear if they knew their video was being used in this Facebook ad.

This Facebook ad from the Edwin Parker Facebook page, which had more than 70,000 followers, read: "Enter Your Zip Code To See What You Get Back. US Citizens with no DUIs in the last 3 years are getting $610 back if they sign up before the deadline ends. HURRY."

However, there was no truth to any of this. Biden did not sign legislation to provide $610, $622, $710, $712, or any other amount of money to drivers who hadn't driven under the influence in the last three years. No other U.S. government entity was providing money either. A picture of Chief Justice John Roberts of the U.S. Supreme Court also appeared in some of the ads as well, which was also misleading.

These sorts of Facebook and Instagram ads often lead to little more than offers to change insurance providers. However, the Better Business Bureau (BBB) told us that these can also be scams that attempt to obtain your personally identifiable information for nefarious purposes. We previously reported about a similar scam that also used pictures of Biden and promised $3,600 stimulus checks from the government to homeowners.

The ad on the Edwin Parker Facebook page led to the website expertsinfinance.online. We noticed that the website's terms and conditions page was rather short, and that the address it listed was in Mumbai, India. People With No DUIs In Last 3 Years Are Getting $710 Back in Savings.

ENDING SOON: Drivers Should Check Savings Before the 30th

Disclaimer: This is an advertorial and not an actual news article, blog or consumer protection update.​ Our aim is to bring consumers the best information that may help them make informed decisions. This article is for demonstration purposes only. By proceeding forward you automatically agree to our terms and conditions. The purpose of this site is the solicitation of insurance.

This article is for demonstration purposes only. By proceeding forward you automatically agree to our terms and conditions. The purpose of this site is the solicitation of insurance.

As for the Edwin Parker Facebook page, it listed 19 page managers in India, one in Germany, and one in the U.S. Also, its profile picture did not show a man named Edwin Parker, but rather Ezekiel Emanuel.

Emanuel's bio said that he was "the Vice Provost for Global Initiatives, the Diane v.S. Levy and Robert M. Levy University Professor at the University of Pennsylvania." He was also listed as "a Special Advisor to the Director General of the World Health Organization, as well as a Senior Fellow at the Center for American Progress." He appeared to do have nothing to do with the Facebook page and likely did not know his picture was being misused.

In sum, no, drivers with "no DUIs in the last 3 years" were not eligible for government refund checks of $610, $622, $710, $712, or any other dollar amount. Readers as well as their friends and family are advised to steer clear of these kinds of ads and websites. For the reasons stated within this story, along with guidance from the BBB, we have rated this claim as a "Scam."