A satirical sign threatening to withhold Halloween candy from "bigoted children" caused offense among people who are offended by offended people. 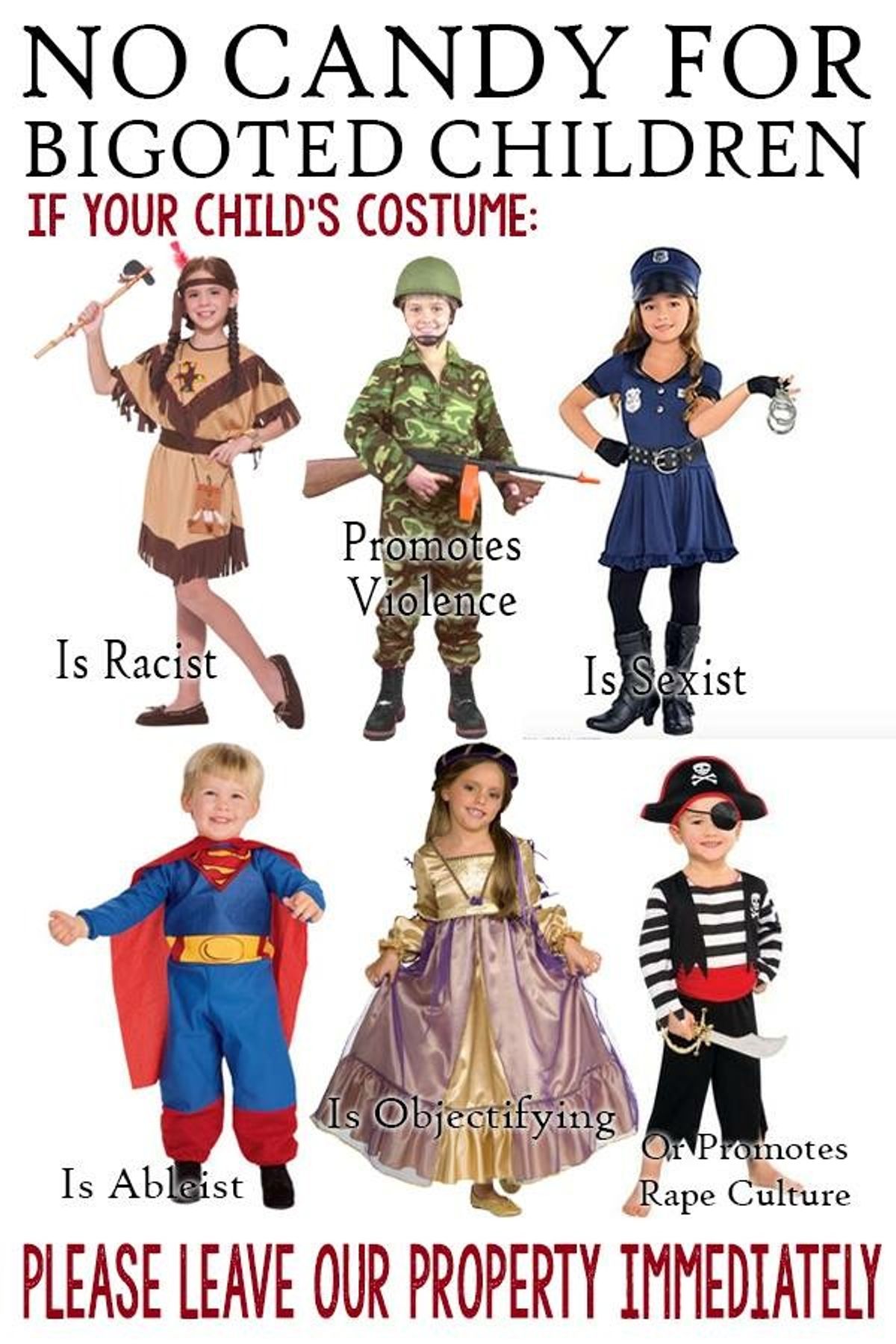 [green-label]Claim:[/green-label]  People are displaying a poster threatening to withhold candy from trick-or-treaters wearing "bigoted" costumes such as a soldier, cop, or pirate.

[green-label]Origins:[/green-label]  On 21 October 2015, Facebook page "The New 93Q" shared the above-reproduced poster, "No Candy for Bigoted Children," with a claim that "people" on the Internet planned to print and display the sign to trick-or-treaters. Above a command to "please leave our property immediately," the poster listed the following costumes as offensive: Native American (racist), soldier (violent), police officer (sexist), Superman (ableist), princess (objectifying), and pirate (promotes rape culture).

Controversies claiming politically correct ideas are ruining Halloween were occurring with increasing frequency around the time the poster appeared, such as inaccurate rumors about bans on the holiday (particularly involving schools in Connecticut and New Jersey), which prompted widespread social media lamentation and harassment of the accused entitites. Clearly, fictitious Halloween bans started to get on the nerves of "The New 93Q" commenters, who remarked:

At my house..these will be the kids that get extra candy!

At least one top-voted comment pointed out that the poster wasn't likely circulating ("and you know it"), hinting that folks presenting the claim as legitimate were deliberately and dishonestly ginning up outrage-based engagement on social media. Copies of the image appeared on Imgur and forums as well, but notably absent from any iterations were comments expressing approval of the poster (or advocating its stance).

The earliest iteration of the image we could find (and likely the original, as none predate it) appeared on the satirical Facebook page "Gaia's Dancing Indigo Children" on 19 October 2015. An appended comment revealed that the image was meant to mock (not advocate) ideas widely perceived as "politically correct":

Dear parents, please teach your little shits to be sensitive to others. Halloween should be fun for everyone and no one should be confronted with costumes that are comprised of microagressions and cultural appropriation. If your children trigger others by knocking on their door and dehumanizing them, expect legal action. Please share with your friends to make Halloween more tolerant. We encourage you to print this out and put it on your door as a warning. Happy Samhain! So mote it be!