Did Nikki Haley 'Accidentally Confess' to an Affair with Donald Trump?

U.S. Ambassador to the United Nations Nikki Haley only inadvertently 'confessed' to being romantically involved with President Trump in clickbait headlines, not in her own words. 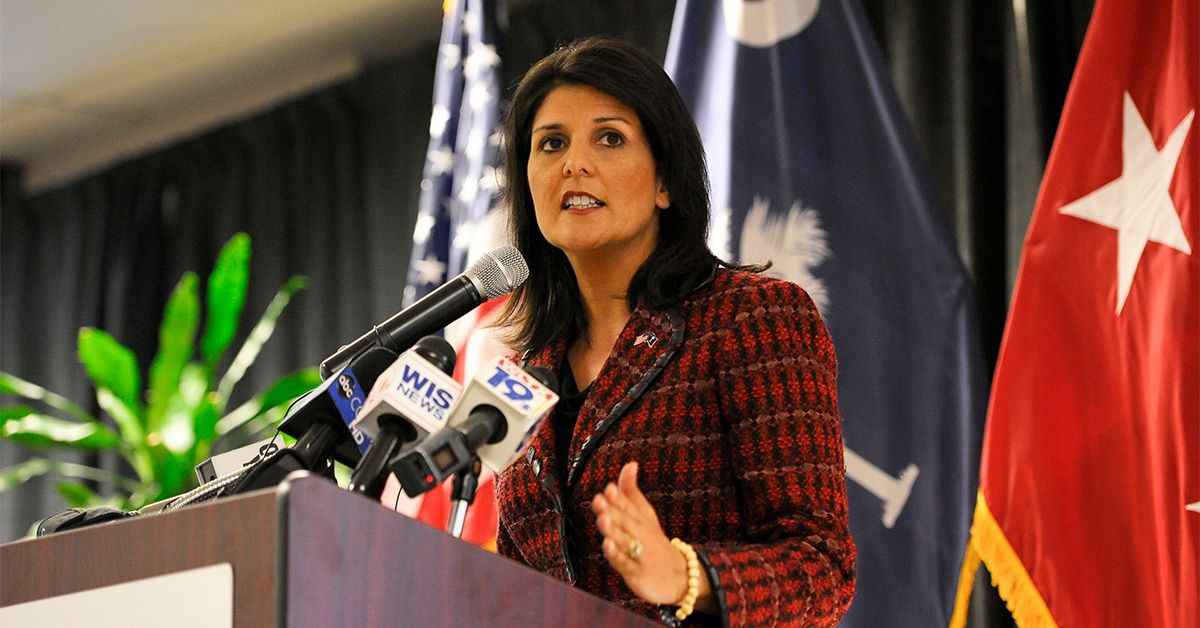 In January 2018, Michael Wolff, the author of the controversial political tell-all book Fire and Fury: Inside the Trump White House, maintained that President Trump was currently involved in an extramarital affair — and that although he "didn’t have the ultimate proof" to incorporate that claim into his book, an oblique reference to the subject could nevertheless be found by those who "read between the lines ... toward the end of the book."

Pundits quickly identified the passage presumably referenced by Wolff as one that named Nikki Haley, the former South Carolina governor whom President Trump appointed as the U.S. Ambassador to the United Nations:

By October, however, many of the president’s staff took particular notice of one of the few remaining Trump opportunists: Nikki Haley, the UN ambassador. Haley — ‘as ambitious as Lucifer,’ in the characterization of one member of the senior staff — had concluded that Trump’s tenure would last, at best, a single term, and that she, with the requisite submission, could be his heir apparent.

The president has been spending a notable amount of private time with Haley on Air Force One and was seen to be grooming her for a national political future. Haley, who was much more of a traditional Republican, one with a pronounced moderate streak — a type increasingly known as a Jarvanka Republican — was, evident to many, being mentored in Trumpian ways. The danger here, offered one senior Trumper, ‘is that she is so much smarter than him.'

In response, Ambassador Haley (who had been the subject of similar extramarital affair rumors while a gubernatorial candidate in 2010) vehemently denied any personal involvement with President Trump during an appearance on Politico's "Women Rule" podcast:

Nikki Haley became a trusted member of Donald Trump’s inner circle over the past year, but she's recently refamiliarized herself with a downside of professional success: rumors of an affair, this time with the president of the United States.

Trump’s ambassador to the United Nations calls the chatter “highly offensive” and “disgusting,” the result of what happens far too often to strong women.

“It is absolutely not true,” Haley said, arguing that Wolff not only has his facts wrong, but that his insinuation is similar to other attacks that she and other successful women have faced when they've been forced to swat down suggestions they've slept their way to the top.

“I have literally been on Air Force One once and there were several people in the room when I was there,” she said in an interview for POLITICO’s Women Rule podcast, referring to a flight from Washington to Long Island in late July [2017]. “He says that I’ve been talking a lot with the president in the Oval about my political future. I’ve never talked once to the president about my future and I am never alone with him.”

Nonetheless, multiple political websites (mostly of the clickbait variety) ran pieces headlined "Nikki Haley Just ACCIDENTALLY Confessed to Being 'Romantically Involved' with Trump!" — even though the text of the underlying articles didn't describe Haley "confessing" to any such thing, inadvertently or otherwise: Those articles merely reported the same thing as the one you're reading now: that Wolff had insinuated an affair between Haley and Trump, and that Haley had strenuously denied it during a recent interview with Politico. No matter how much between-the-line reading one might engage in, nothing the U.N. ambassador said during that Politico interview (or elsewhere) could be remotely construed as her affirming that she was, or had ever been, "romantically involved" with Donald Trump.