Are Rare 'Night-Shining' Clouds an Indicator of Climate Change? 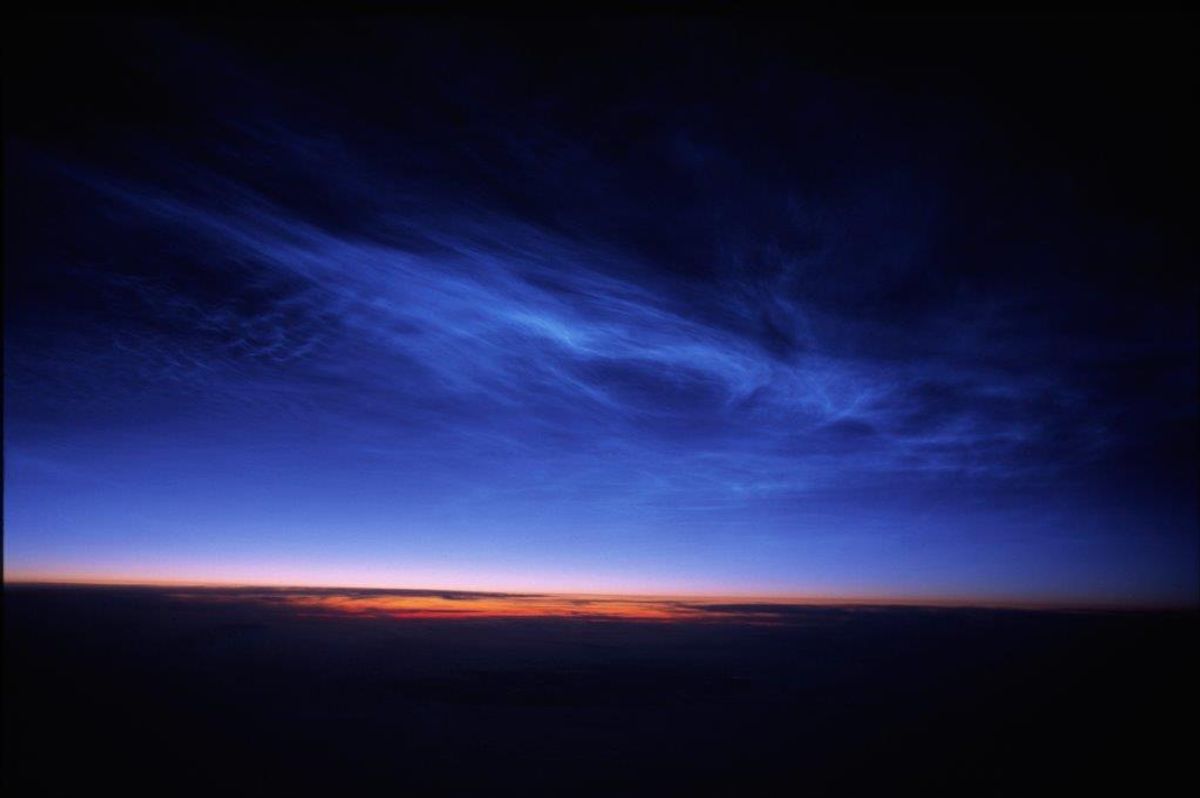 The occurrence of a rare form of night cloud is increasing in parts of the world, and may serve as an indication that the presence of human-caused greenhouse gases responsible for climate change is also on the rise in the Earth’s atmosphere.

Noctilucent (Latin for “night-shining”) clouds are typically rare, and are located at a height of around 50 miles (80 kilometers) above Earth in a layer of atmosphere known as the Mesosphere. These wispy clouds are only visible on clear, summer nights at mid-to high latitudes, and only form under specific conditions, according to the United Kingdom Metrological Office. As water vapor freezes around specks of dust at low mesospheric temperatures, newly formed ice crystals are illuminated from the low-angled sun during dusk and dawn.

But increasing human-caused pollutants — like methane and particulate matter — means that both the amount of water vapor and levels of dust in the atmosphere are also on the rise, spurring an increase in the occurrence of noctilucent clouds.

Dust can come from man-made pollutants, as well as natural processes such as dust left behind from passing meteors or matter projected into the atmosphere from volcanoes. On the other hand, water vapor can come both from the Earth’s surface through natural mechanisms or via methane, which produces water vapor through chemical reactions that occur in the atmosphere. As such, a 2018 study published in the journal Geophysical Research Letters found that noctilucent clouds may serve as an indicator of human-caused climate change.

To come to their conclusions, researchers with the American Geophysical Union ran computer models and satellite observations to simulate how greenhouse gases from burning fossil fuels have contributed to an increased occurrence of noctilucent clouds over the last 150 years. Since the dawn of the Industrial Revolution, it appears that methane emissions have increased water vapor concentration by about 40 percent, contributing to more than double the amount of mesospheric ice.

“We speculate that the clouds have always been there, but the chance to see one was very, very poor, in historical times,” said Franz-Josef Lübken, an atmospheric scientist at the Leibniz Institute of Atmospheric Physics in Kühlungsborn, Germany, in a statement.

Though the presence of noctilucent clouds fluctuates every year, they were shown to become more frequent over the course of the study period, confirming similar findings published in a 1989 edition of Nature. Together, the studies provide a sign that the burning of fossil fuels appears to be affecting natural processes reaching high into Earth’s atmosphere.

The authors caution that observing interactions in the mesosphere is rather challenging.” Little is known about trends over long periods of time and databases documenting long-term trends is “still rather poor.” That being said, the researchers argue that modern technologies and increasing observational data in recent decades provide further evidence that human-caused greenhouse gases may increase the likelihood of noctilucent cloud formation.

In 2020, the start of the Arctic noctilucent cloud season began on May 17, which NASA reports is the second-earliest start of the northern season that researchers have observed. Polar mesospheric clouds typically stay close to the Earth’s poles, but were seen as far south as California and Oklahoma in 2019, The Washington Post reported at the time, and appear to be “forming earlier and spreading farther each year.”