Did Engineers Make a 'Grisly Discovery' After Draining Niagara Falls?

Our research led to a newspaper article from June 13, 1969, one month before Apollo 11's moon landing. 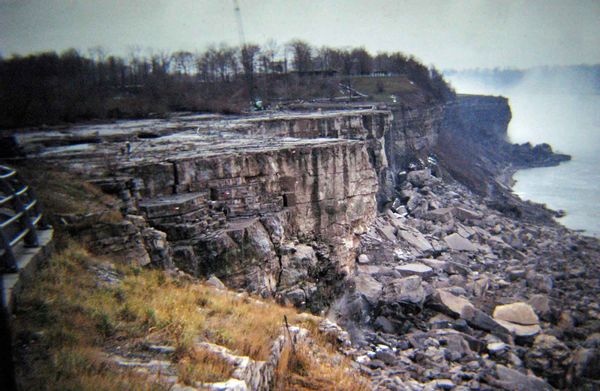 Claim:
Engineers drained Niagara Falls in 1969 and made a grisly discovery.
Rating: Niagara Falls was indeed drained in 1969 by the Army Corps of Engineers. The American falls side was diverted to the Canadian side for several months as part of a massive "dewatering" project to assess erosion.

The advertisements also mentioned that a "chilling," "nauseating," "stomach-churning," and "sickening" discovery was unveiled. While those adjectives may have been subjective, it is true that two dead bodies were recovered from the bottom of the falls.

On June 13, 1969, just one month before Apollo 11's moon landing, The Vancouver Sun published a story from The Associated Press. For context, June 13 was a Friday:

The bodies of an unidentified man and woman have been found here in a grisly beginning to a major engineering feat that has all but halted flow of the Niagara River over the American Falls.

Police said today the decomposed body of the woman was discovered Wednesday while they searched for the man, who was seen leaping over the precipice. His body was found Thursday.

The water was shunted to the channel flowing over the Horseshoe Falls so engineers can study the face of the American Falls in an attempt to halt erosion."

We were unable to find any information on the identity of the corpses. A list on Wikipedia included just a few of the many people who have died at Niagara Falls over the last two centuries.

According to Wired.com, when Niagara Falls was dewatered, the Army Corps of Engineers also found millions of coins:

When crews shut down the falls in 1969, they found two bodies and millions of coins, most of which were removed. (As were the human remains, of course.)

But in the last 50 years, tourism at Niagara has grown wildly. The possibilities are endless — more coins, yes, but also lost cell phones, cameras, baby strollers, errant drones, and whatever else could be thrown or dropped by careless, thoughtless, or mischievous visitors.

There is, of course, the possibility of human remains being discovered again — though there are no individuals known to have jumped or fallen in who haven’t been recovered.

The website NiagaraFrontier.org published more information on the dewatering project, and published photographs shot by Clifford and Madeline Valentine, courtesy of Russell Glasson.

On Feb. 8, 2020, The Buffalo News reported that two nearly 120-year-old pedestrian bridges in Niagara Falls were in need of being repaired or replaced. The bridges were situated above the rapids. Discussions were underway as to whether water would need to be diverted as it had been in 1969.