Did NFL Decide Not to Televise National Anthem Before Super Bowl?

An inaccurate meme claims the national anthem won't be televised before the Super Bowl. 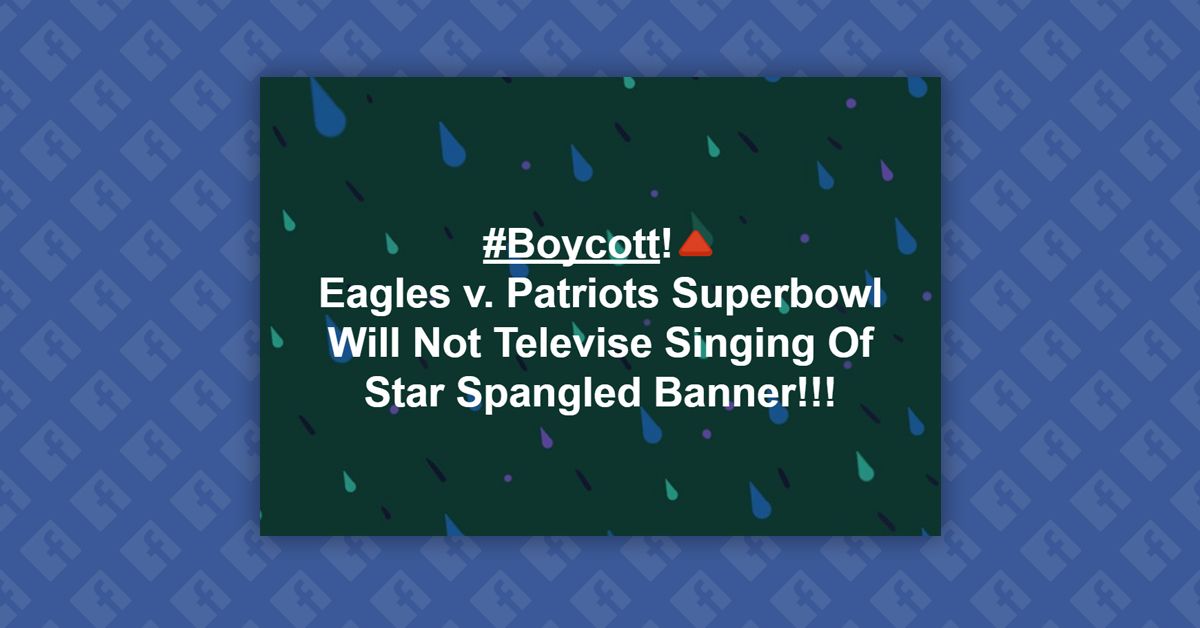 Claim:
The NFL announced that it will not be televising the national anthem before the Super Bowl in February 2018.
Rating:

As the NFL's biggest game of the year approaches, a piece of fake news is stirring up controversy about the anti-police brutality protests of some league players during the pre-game tradition of singing the national anthem.

On 24 January 2018 a meme made its way around Facebook claiming that contrary to a long history of pre-game performances, the national anthem would not be televised before this year's Super Bowl: There is no basis for this claim.

A number of NFL players have protested police brutality and racial inequality by kneeling during the pre-game national anthem during the past season, a movement that began with free agent Colin Kaepernick's kneeling in the 2016 pre-season. This meme falsely suggested that the NFL would attempt to avoid the controversy surrounding these protests by simply not showing the national anthem on television.

However, both NFL and NBC, the network broadcasting this year's Super Bowl, have stated that the national anthem will be televised live.

On 8 January 2018, the NFL published a press release announcing that musician Pink is slated to perform the national anthem at this year's game and that the performance would be "televised live" prior to kickoff:

International superstar P!NK will sing the National Anthem as part of Super Bowl LII pregame festivities at U.S. Bank Stadium in Minneapolis on Sunday, February 4, the NFL and NBC announced today. The performance will be televised live on NBC prior to kickoff.

NBC Sports EP Fred Gaudelli also confirmed: not only will the national anthem be broadcast live, as usual, but any player protesting during the song will likely be shown on television:

“If there are players who choose to kneel, they will be shown live,” he said.

The Philadelphia Eagles will face off against the New England Patriots on 4 February 2018. The two teams have handled protests differently in the past.

Some Patriots players refused to visit the White House last spring to celebrate their last Super Bowl victory, citing President Donald Trump's criticism of the national anthem protest movement. The president disparaged players and the NFL, calling on owners to fire players. Patriots owner Robert K. Kraft, a Trump supporter, said he was "deeply disappointed" with the remarks. Eagles safety Malcolm Jenkins is an outspoken activist who is giving one of his two Super Bowl tickets to plans to bring Kempis Songster, a newly released prisoner to the game. Songster, now 45, served 30 years for a murder he committed while he was still a teenager. Jenkins told the New York Daily News he "wanted to do something special" for Songster, who he met during a prison visit intended to educate the player about the criminal justice system and mass incarceration, an issue at the heart of the NFL protests.