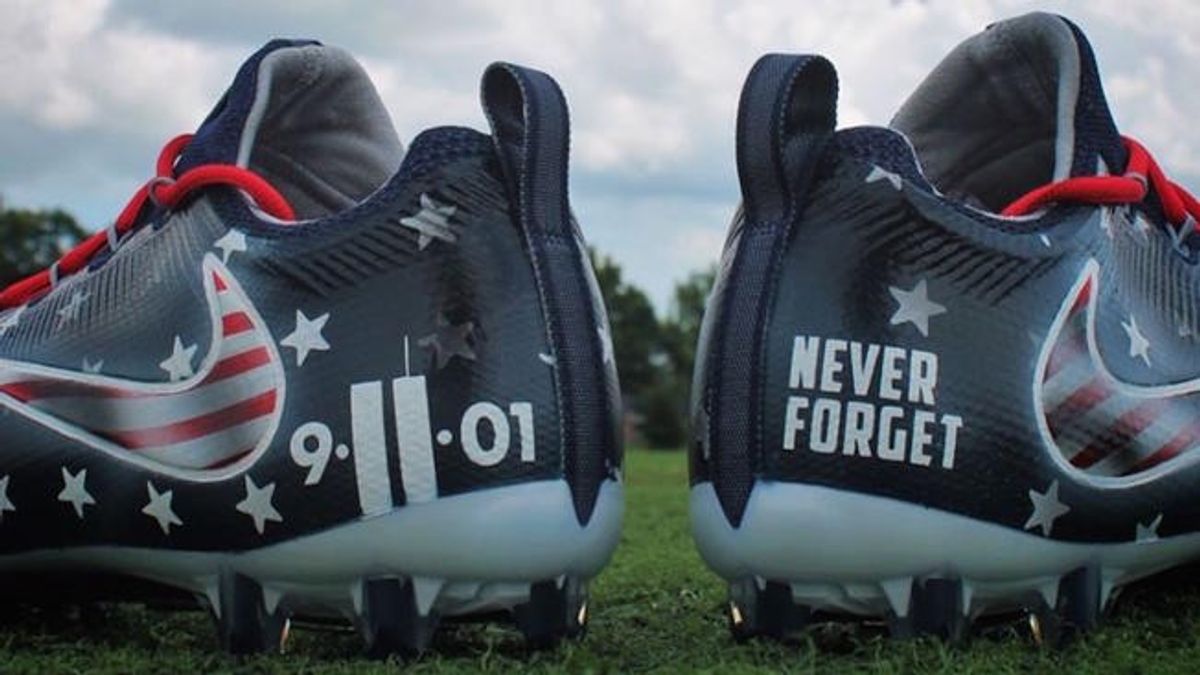 Tennessee Titans linebacker Avery Williamson said an NFL representative told him he'd be fined if he wore 9/11 memorial cleats during a league game.

ESPN reported that no fines were expected to be levied against players who wore 9/11 memorial cleats during games played on September 11, and no reports from either the league or players have documented that any such fines were actually levied.

On 9 September 2016, rumors spread via social media holding that the NFL had banned and threatened to fine players for wearing 9/11 memorial cleats or other memorial gear during football games played on 11 September 2016, after a newspaper reported on 9 September 2016 that Tennessee Titans linebacker Avery Williamson said a league official had issued him such a warning:

The NFL squashed Titans starting linebacker Avery Williamson’s plan to use fancy footwear to honor those who died on Sept. 11, 2001.

Williamson was going to wear custom patriotic cleats during the Titans’ home opener against the Vikings on the 15th anniversary of the 9/11 terrorist attacks, but those plans changed when a league representative called to inform him about a looming fine for violating uniform code.

“I don’t want to draw negative attention, so I’m just going to focus on playing the game,” Williamson told The Tennessean. “Once I heard from them, I didn’t even try to argue anything. I just left it alone. I didn’t want to press the issue.”

The star-spangled blue cleats with red- and white-striped Nike swooshes were airbrushed by True Blue Customs in Lexington, Ky. They feature the words “Never Forget” and “9/11” on the back of each shoe, with the "11" representing the Twin Towers. The NFL mandates all teammates wear the same color scheme on their shoes.

On Twitter, Williamson linked to a press release announcing his plan to auction the cleats in lieu of wearing them:

Titans' Avery Williamson, has changed his plan to wear custom patriotic cleats to honor 9/11 victims and service men/woman during the home opener against the Vikings on September 11, 2016. Instead, he has chosen to raise more awareness through an auction partnered with Operation Warrior Wishes and Charity Buzz International, which is live now.

As for the cleats, they will be auctioned off for charity along with a meet & greet, two VIP tickets to a Tennessee Titans home game, and an autographed #54 jersey. The proceeds of the auction posted will go to Operation Warrior Wishes.

However, ESPN reported that no fines were expected to be levied against players who went ahead and wore 9/11 memorial cleats during games played on September 11:

The navy blue shoes Williamson and the other players wore had "9-11-01" on the back of the left shoe, with the "11" in the shape of the World Trade Center. The right shoe said "Never Forget."

We've seen no reports so far from either the league or players documenting that any such fines were actually levied.

When a similar situation arose in 2011, the NFL announced in advance of the day that no fines would be assessed:

NFL players will not have to shell out a fine to honor the victims of 9/11 on Sunday.

[P]layers from Redskins tight end Chris Cooley to Titans quarterback Matt Hasselbeck, who had tweeted pictures of new Reebok gear honoring the national tragedy, were expecting to have to shell out a fine for wearing the special cleats and gloves in Sunday's games.

But NFL spokesman Greg Aiello told the Daily News that the players would not be fined for wearing the tribute gear, despite the league's strict uniform policy.

"We have extensive plans for Sunday to respectfully recognize the significance of the day," he said.