Did the NFL Stop Donations to Breast Cancer and Military Charities in Order to Fund Black Lives Matter?

Websites misrepresented details of an agreement between the National Football League and protesting players. 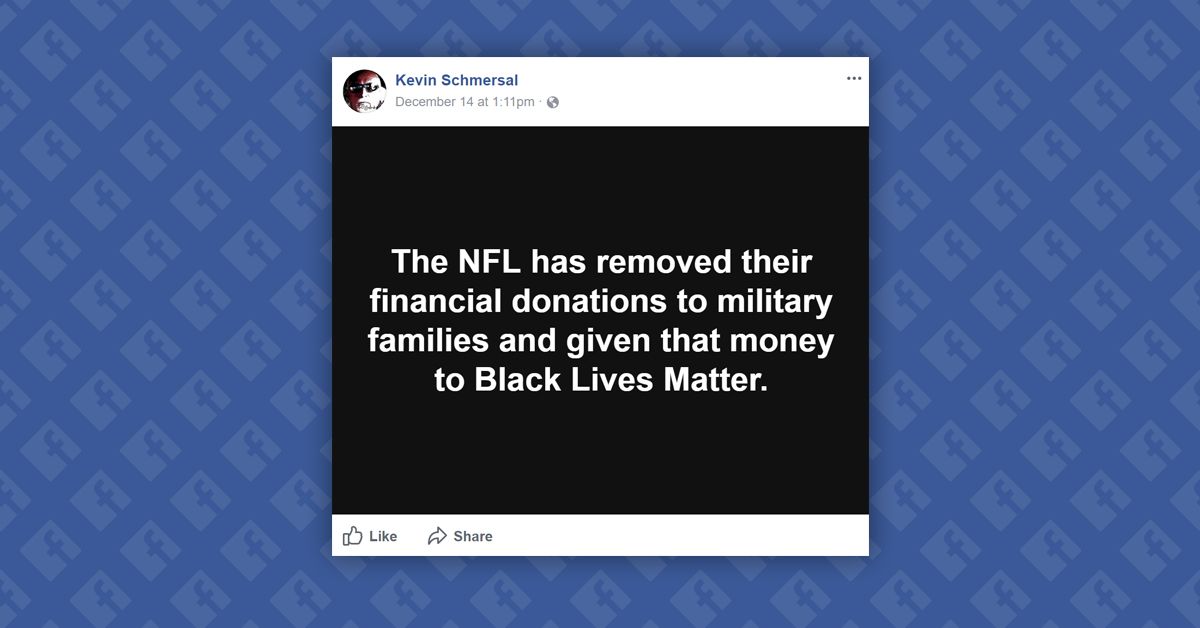 Claim:
In November 2017, the National Football League decided to end its donations to various existing charitable commitments and shifted that funding to the Black Lives Matter movement.
Rating:

The long-running controversy surrounding protests by some National Football League players during the national anthem took yet another turn in late December 2017, when reports emerged that league bosses had decided to stop funding military and other charities, and shift their donations to the Black Lives Matter movement.

On 14 December, Facebook user Kevin Schmersal posted, with no citations or supporting evidence:

The NFL has removed their financial donations to military families and given that money to Black Lives Matter.

This claim is false on its face. There is no plan for any funding to be provided to the Black Lives Matter movement, and reports to that effect misrepresent the details of an agreement between the NFL and protesting players which would reportedly see $89 million provided for social justice activities over the next seven years.

On 1 December 2017, an obscure web site called Patriot.Report published a story with the inaccurate headline "NFL Betrays Military and Cancer Victims, Donates to Black Lives Matter," while Breitbart.com reported that the NFL was "siphoning" donations from breast cancer and military charities to fund social justice programs.  These reports are based on a 30 November 2017 story in which San Francisco 49ers player Eric Reid said that the league would be shifting funds from existing charitable commitments in order to pay for an $89 million social justice program over the next seven years:

“In the discussion that we had, Malcolm conveyed to us—based on discussions that he had with the NFL—that the money would come from funds that are already allocated to breast cancer awareness and Salute to Service,” Reid said in an interview with Slate. “So it would really be no skin off the owners’ backs: They would just move the money from those programs to this one.”

“We didn’t agree with that, because we weren’t trying to cut other worthy programs,” he added, discussing his and other players’ decision, announced on Wednesday, to leave the Players Coalition. “They moved forward anyways.”

The social justice funding was agreed between NFL officials and the Players Coalition, a group of NFL players at the forefront of ongoing national anthem protests that  emerged in response to racial and social injustice, in particular police brutality against African-American men.

However, none of the funding will go to the Black Lives Matter movement. According to ESPN, a quarter of the money is slated to be provided to the United Negro College Fund, which provides scholarships for black students to attend historically black universities; another quarter will go to Dream Corps, which supports and funds social justice initiatives focused on criminal justice reform; the remaining 50 percent will go to the Players Coalition.

Reid also told Slate that he and others had left the Players Coalition over this arrangement, because they did not want to "cut other worthy programs."

"Salute to Service" is the NFL's "military appreciation" campaign, which involves recognition of the United States military and its members at games as well as donations to military-related charities such as the Wounded Warrior Project and the Pat Tillman Foundation.

This new program will supplement, and not replace, our other key social responsibility efforts, including Salute to Service, cancer awareness, domestic violence/sexual assault and youth programs.

When asked whether this meant team owners would be required to provide separate, additional funding for the $89 million social justice program, rather than simply reallocating existing donations, McCarthy said:

The league office and also the clubs will contribute funds. There’s no effect on other existing programs.

We asked representatives for both Eric Reid and Malcolm Jenkins whether they could clarify or explain the contradiction, but we did not receive a response from either in time for publication.