Bureaucratic hurdles appeared to have prevented a hospital ship in New York City from being fully used. 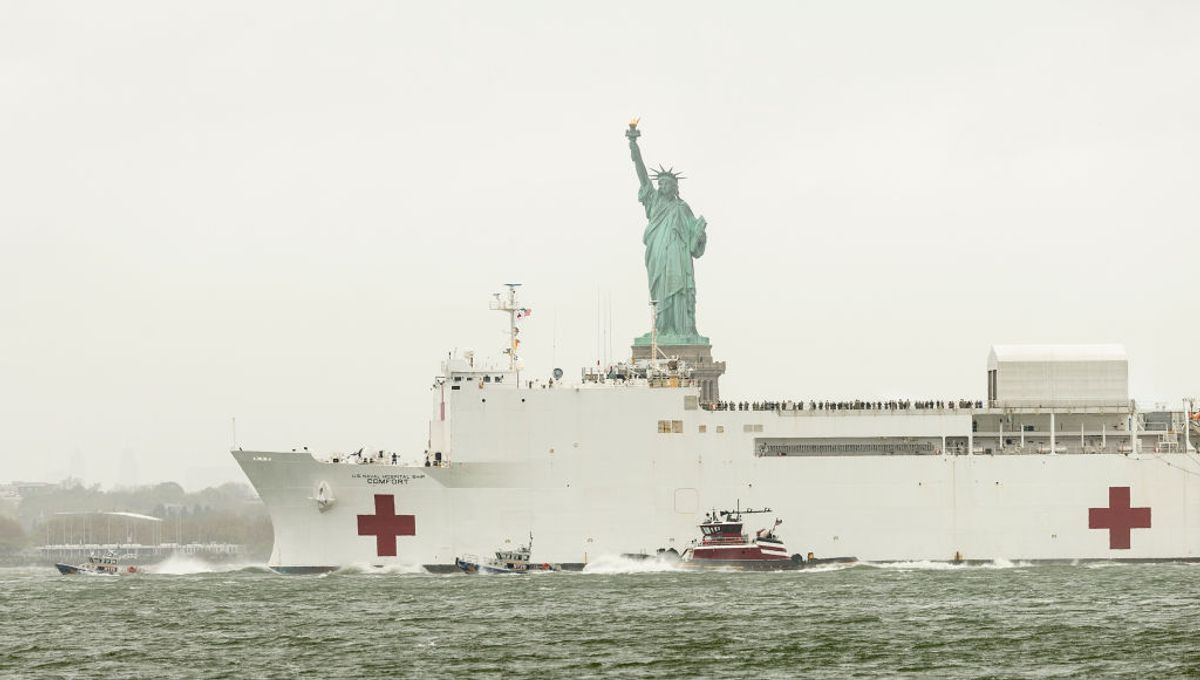 Due to a March 25, 2020, New York state directive, recovering COVID-19 patients were discharged from hospitals and sent to nursing homes. USNS Comfort, a hospital ship, was sent to New York City that month to aid the city's hospitals, but the ship's resources were underused.

USNS Comfort was not empty and completely unused. After three weeks, it had treated 179 patients. The underutilization of the ship, however, cannot be blamed solely on Cuomo but on a combination of bureaucratic and military restrictions, as well as the use of the Javits Center as a temporary hospital.

A meme about New York Gov. Andrew Cuomo was making the rounds in May 2020 that criticized his management of COVID-19 coronavirus disease pandemic patients in New York and the resources at his disposal. The meme said, "While the USNS Comfort sat in New York empty and unused, Andrew Cuomo mandated nursing homes to take COVID patients."

The reality is a bit more complicated. While Cuomo did indeed direct that COVID-19 patients be sent to nursing homes to help ease the burden on hospitals, the underutilization of the USNS Comfort was due to a wide range of factors. On March 25, Cuomo and the state New York Health Department directed that recovering COVID-19 patients be discharged from hospitals and sent to nursing homes. At least 4,500 patients were sent to "already vulnerable" nursing homes, according to data compiled by The Associated Press (AP). Many blamed the controversial order for more than 5,800 deaths in nursing and adult care facilities in New York, more than in any other state.

That order, from the office of New York State Health Commissioner Howard Zucker, came amid a "scramble to provide more hospital beds." The order said:

There is an urgent need to expand hospital capacity in New York State to be able to meet the demand for patients with COVID-19 requiring acute care. As a result, this directive is being issued to clarify expectations for nursing homes (NHs) receiving residents returning from hospitalization and for NHs accepting new admissions.

The plan, according to AP, quickly came under attack:

“It was the single dumbest decision anyone could make if they wanted to kill people,” Daniel Arbeeny said of the directive, which prompted him to pull his 88-year-old father out of a Brooklyn nursing home where more than 50 people have died. His father later died of COVID-19 at home.

“This isn’t rocket science,” Arbeeny said. “We knew the most vulnerable -- the elderly and compromised -- are in nursing homes and rehab centers.”

On May 10, Cuomo reversed the order, saying now only patients who tested negative for the virus could be released to nursing homes. He continued to defend the decision, arguing he was following the Centers for Disease Control and Prevention (CDC) and Centers for Medicare and Medicaid Services (CMS) guidelines. He also said:

“Any nursing home could just say, ‘I can’t handle a COVID person in my facility,’” he said, although the March 25 order didn’t specify how homes could refuse, saying that ”no resident shall be denied re-admission or admission to the (nursing home) solely based” on confirmed or suspected COVID-19.

Meanwhile, at the end of March, according to The New York Times, the USNS Comfort was sent to New York City to aid hospitals overburdened with COVID-19 patients by taking on non-coronavirus cases. U.S. President Donald Trump himself oversaw the ship's departure from Norfolk, Virginia. But on April 2, the 1,000-bed facility only had 20 patients.

A combination of military protocols and bureaucratic hurdles prevented the ship from accepting many patients, frustrating many hospital leaders. The New York Times report outlined the hurdles that restricted patient intake in early April:

On top of its strict rules preventing people infected with the virus from coming on board, the Navy is also refusing to treat a host of other conditions. Guidelines disseminated to hospitals included a list of 49 medical conditions that would exclude a patient from admittance to the ship.

Ambulances cannot take patients directly to the Comfort; they must first deliver patients to a city hospital for a lengthy evaluation — including a test for the virus — and then pick them up again for transport to the ship.

At the same time, according to the Times, the number of non-COVID-19 patients in New York City hospitals had dropped:

... there is not a high volume of noncoronavirus patients. Because most New Yorkers have isolated themselves in their homes, there are fewer injuries from car accidents, gun shots and construction accidents that would require an emergency room visit.

Michael Dowling, head of New York's largest hospital system, expressed his frustration over the hurdles getting patients to the hospital ship:

Ultimately, Mr. Dowling and others said, if the Comfort refuses to take Covid patients, there are few patients to send. And given the pernicious spread of the disease in New York City, where nearly 50,000 were infected as of Thursday, dividing patients into those who have it and those who do not is pointless, he said.

The solution, he and others said, was to open the Comfort to patients with Covid-19.

“It’s pretty ridiculous,” he said. “If you’re not going to help us with the people we need help with, what’s the purpose?”

On April 6, Cuomo asked Trump for permission to treat coronavirus patients on the ship. Trump agreed, and the Navy reconfigured the ship into a 500-bed hospital so it could space out patients to avoid spreading the disease. But on that same day, a crew member tested positive for the disease, even after the crew had been ordered to quarantine for two weeks before their departure for New York. The number of infected grew to four in the following weeks. By April 21, the ship had treated only 179 patients, not even close to its capacity.

Trump acknowledged during a White House briefing that the reason the ship wasn't put to much use was because its arrival coincided with the opening of a military-supported temporary hospital at the Jacob K. Javits Convention Center. A commander of the Comfort's task force supporting the COVID-19 mission in New York City echoed the sentiment:

Combined, “we made a pretty significant impact,” O’Brien said. “But the reality is the hospitals were able to double the number of ICU beds almost in the time that we were here.”

“We had the extra capacity – if it was needed – and fortunately it wasn’t needed,” he added. “So I think that is a win.”

The Javits center's makeshift hospital treated around 1,000 patients during its run, and was closed by May 1 after it appeared that New York City was past the peak of the pandemic. Days before, Cuomo met Trump at the White House, where the president asked him about relocating the Comfort back to its base where it could be dispatched to other locations. Cuomo later told MSNBC that the state no longer needed the hospital ship. Barely a month after the ship arrived in New York, it returned to Norfolk.

In summary, Cuomo's administration did issue a controversial directive that sent recovering COVID-19 patients to nursing homes, which may have contributed to a spike in COVID-19-related deaths in those facilities. Officials reversed the order in May. The USNS Comfort's inability to take in more patients was due to a combination of bureaucratic hurdles for New York City hospitals who found it difficult to send patients to the ship in the first place. Even after the ship opened up to treating COVID-19 patients, it was still unable to fill all of its beds. Therefore, we rate this claim as a "Mixture."

Centers for Medicare and Medicaid Services.   "Guidance for Infection Control and Prevention of Coronavirus Disease 2019 (COVID-19) in Nursing Homes."    13 March 2020.

Collman, Ashley.   "How USNS Comfort went from a symbol of hope with the president's blessing, to heading back from NYC having treated fewer than 180 patients."    Business Insider.   26 April 2020.