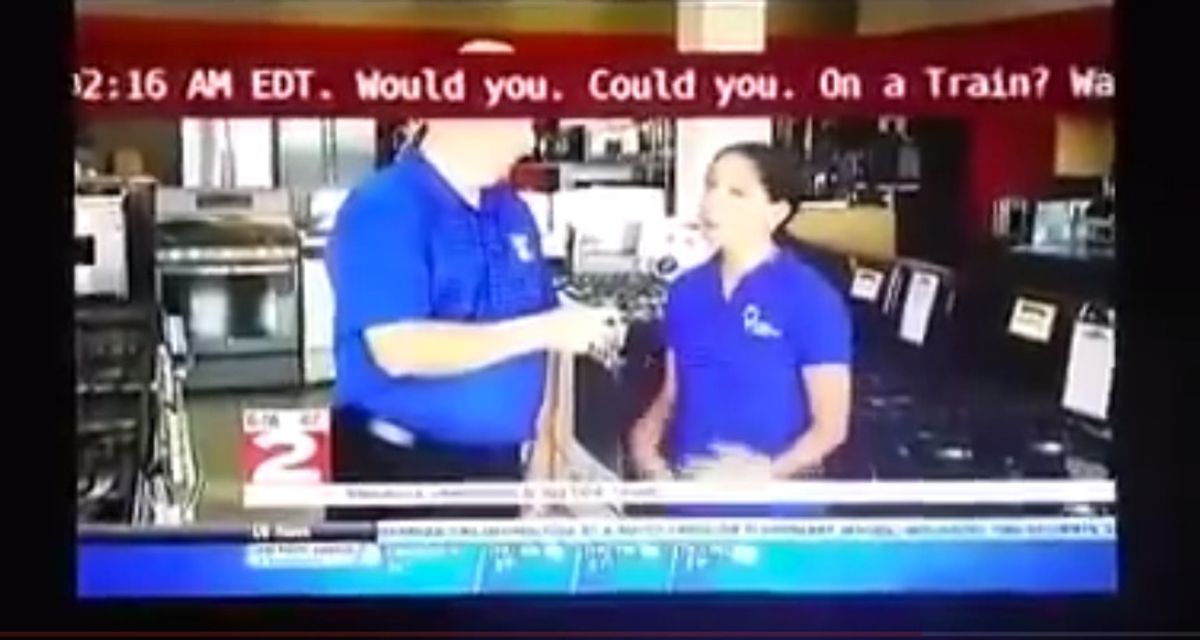 On 29 September 2016, a New Jersey Transit train crashed in Hoboken, killing one person and injuring more than 100. Not long after the accident, rumors appeared of an unsettling Emergency Alert System clip which had purportedly aired on Utica-area television station WKTV the night before:

Civil authorities have issued a Hazardous Materials Warning for The United States. Effective until September 29, 02:16 AM EDT. Would you. Could you. On a Train? Wait for further instructions.

The station acknowledged that the alert appeared in error on 28 September 2016:

If you were watching our 6 PM newscast you saw a "Hazardous Materials Warning" message. There is NO such warning. It was a technical error. — WKTV (@WKTV) September 28, 2016

The outlet also published a brief article about the error on 28 September 2016:

If you were watching our newscast around 6:17PM or at 10:38PM, you may have seen a "Hazardous Materials Warning" crawl across your screen. There is no such warning. The message was an automated test which was not intended for public display. This message originated from FEMA as a test and had the National Location Code in it. Tests should not have that code as it is automatically re-transmitted. We have contacted New York State Broadcasters Association who administers the Emergency Alert System in New York. We are working with FEMA to resolve this. Our apologies for the confusion this may have caused.

At 10:53 PM EST on 28 September 2016, WKTV published a post to their Facebook page indicating a second erroneous message had been broadcast:

UPDATE: Another warning message was sent out in error at 10:38 p.m. There is no emergency. This message originated from FEMA as a test and had the National Location Code in it. Tests should not have that code as it is automatically re-transmitted. We apologize for any inconvenience.

Not long after that, WKTV said there was confusion in a comment on a previous post, fueling more rumors:

FEMA replied that they did not send this out. They will launch a full investigation into how their codes were hacked. WKTV seems to be the only target of this hack. For now, we have disabled the codes in our decoder that trigger this alert. If there is a real National Alert, we will still receive it from the local radio stations we are assigned to monitor. WKTV will cooperate fully with FEMA, providing information about our hardware, software and internet access, and will provide log files from our devices. This information will be helpful to FEMA to track down the source of this hack ... We're in contact with the NYS Broadcasters Association and FEMA.

Although WKTV's "would you, could you" alert coupled with the next day's train crash led to inevitable conspiracy theories, the phenomenon was not localized. YouTube users from a number of states shared regional versions of the broadcast, many of which were the first time viewers saw an emergency alert mention the entire United States:

We contacted WKTV's newsroom to determine whether in addition to an erroneous set of messages, the train rhyme was included. An employee confirmed that the alert aired at approximately 6:18 PM local time on 28 September 2016, and contained the Seuss quote. Although the anomalous EAS broadcast alarmed viewers nationally, scheduled system tests for 28 September 2016 were announced in July 2016. On 4 October 2016, a FEMA representative explained in an e-mailed statement:

The EAS device installed at the TV station was configured to poll a test and development message aggregator instead of or in addition to the production message aggregator. Wednesday evening a developer was testing his software and sent several messages into the test and development message aggregator populating the message field with some Dr. Seuss lines. The developer never intended for the public to see his test message and the TV station was unaware that its EAS device was monitoring a test environment. The EAS device was re-configured and the unsuspecting developer briefly lost his access to the test environment while FEMA confirmed that there was no ill intent by any party.

While WKTV's unusual message coincided with a train-related tragedy the following day, viewers in areas across the United States received similar warnings during the planned broadcast event, none of whom experienced coincidental incidents or accidents the following day.  It remains unclear how the Dr. Seuss rhyme made it into the broadcast.