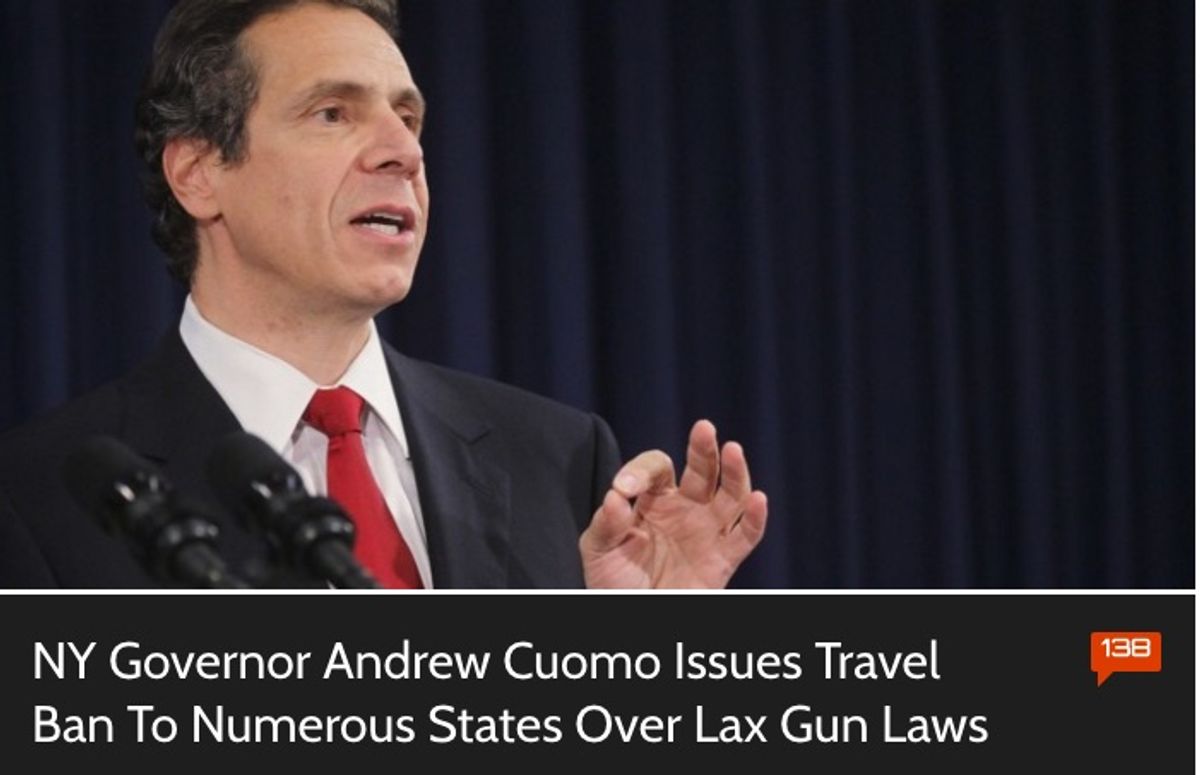 Governor Andrew Cuomo announced Friday morning that a travel ban has been placed on 6 states in the US, citing their relaxed gun laws and potential harm to New Yorkers.

The states affected by the ban include Florida, Texas, Idaho, Arizona, Utah and Vermont. That number is expected to grow as the Governor’s office continues to review gun laws across the country, to see which states would be a danger to visitors.

“We see states like Florida, who have no magazine-clip capacity limit. If you’re at the beach on vacation with your family, you could have someone walking around on that very same beach who is concealing six or seven 100-round drums for his Glock ... After we introduced the SAFE Act, New Yorkers had to give up any magazine-clips that held more than 10 rounds. We allowed them to be sold out of state, but then realized that all of the other states now have these dangerous magazine-clips. So, it’s best that New Yorkers simply stay in New York where everyone only has magazine-clips that hold 10 or less rounds. We don’t want to risk exposing them to the same magazine-clips that we were trying to get rid of in the first place. Now, they’re another state’s problem and not ours. Sometimes when we deem something a problem, we just hand it off to our neighbors and walk away.”

The article was a fabrication. The site on which it originated published a follow-up item on 2 April 2016 explaining that the claim was a joke:

[This year after posting a separate joke article], [w]e waited a few hours, because we figured that everyone would think our April Fools prank was over. But it wasn’t.

Around 5:30pm EST, we unleashed the 2nd and last April Fools article for the year. We had no idea the uproar it would cause.

Soon, the comments started pouring in. One of the first comments really hit reality on the head and made me think… this was a great topic because, coming from NY, it could actually be seen as truth. Ridiculous truth, but truth nonetheless ... The post kept spreading, and then other pages picked it up –as satire– and it spread even more. At this point, I wouldn’t be surprised if the Governor’s office has received calls and/or emails on this topic.

It’s highly likely that many of the 1,400+ people who commented on the original Facebook post didn’t actually read the article, instead just reading the headline. If the article were read in full, I think many of these comments wouldn’t exist in the first place.

While this article was an April Fool's Day joke, it is true that on 5 April 2016 (several days after the "lax gun law" story began circulating), Governor Cuomo announced a genuine travel restriction:

However, that ban only involved state-funded or state-sponsored non-essential travel, and citizens were still able to travel freely to and from Mississippi.  It was intended as a response to a law recently enacted by Mississippi, which allowed businesses to refuse service to people based on their gender identity or sexual preference.

This law is a sad, hateful injustice against LGBT community & I will not allow any non-essential official travel to MS until it is repealed. — Andrew Cuomo (@NYGovCuomo) April 5, 2016

Governor Cuomo previously banned non-essential state travel to North Carolina and Indiana following passage of similar "religious freedom" laws there.  New York lifted the travel restriction to Indiana after it amended its law to prevent it from being used to discriminate against people based on sexual orientation or gender identity.  None of the bans had anything to do with guns.