Is Times Square Closed to Crowds on New Year's for First Time in History?

The ball drop on New Year's Eve is going to look a little different in 2020. 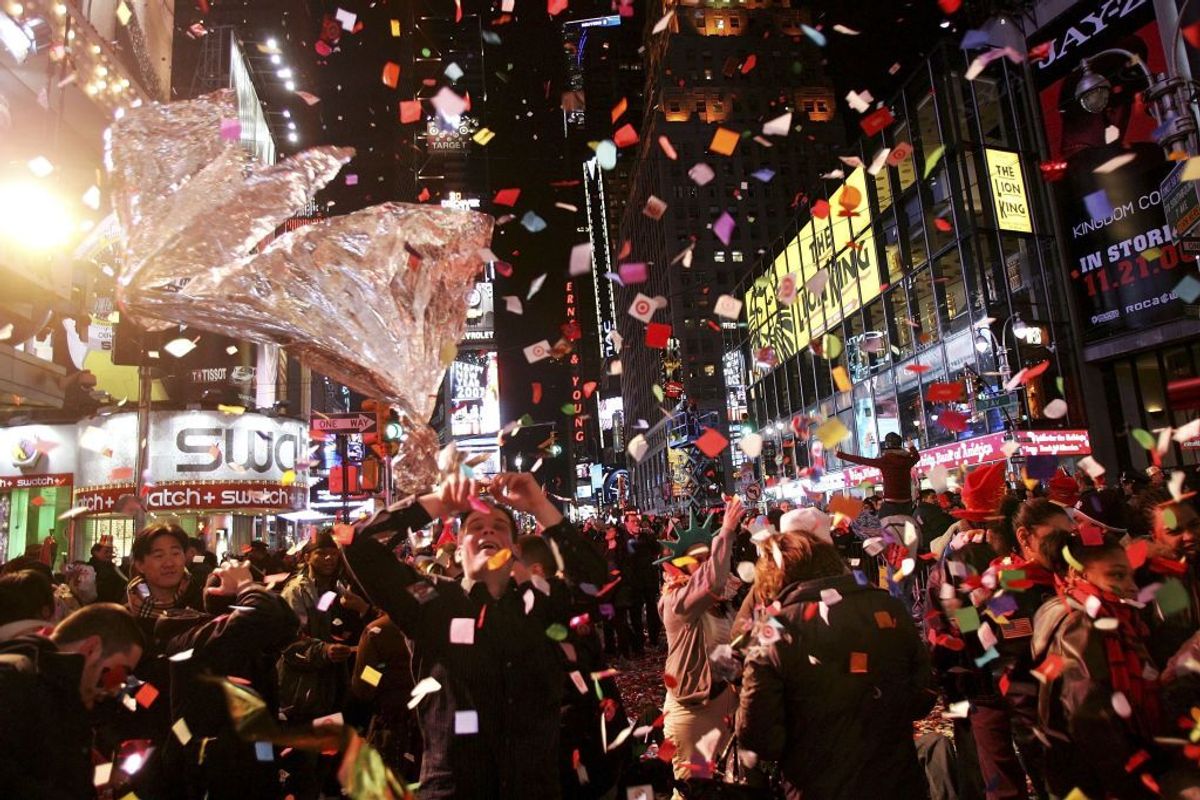 Claim:
The celebration to mark the end of 2020 will be the first time the public will be prohibited from gathering for festivities in Times Square on New Year's Eve.
Rating:

The ball drop in New York City's Times Square on New Year's Eve is going to look a little bit different in 2020.

In fact, this will be the first time since that crowds will be prohibited from gathering there to celebrate the end of the year:

Times Square's New Year's Eve festivities began on Dec. 31, 1904, in a celebration that marked both the new year and the renaming of Longacre Square as Times Square after The New York Times moved into the Times Building (now One Times Square). While Times Square has seen crowds, fireworks, and other New Year's Eve festivities since 1904, it wasn't until 1907 that the celebration featured the iconic "ball drop." In a 2015 article looking back at the history of New Year's celebrations in Times Square, The New York Times wrote:

The marriage of The Times and New Year’s Eve began Dec. 31, 1904, when the newspaper moved its headquarters from Lower Manhattan into a 24-story tower bounded by Broadway, Seventh Avenue and West 42nd Street. The intersection, and the area around it, had been known a year earlier as Longacre Square. The Times saw to it that the name was changed.

When the first firework shot 1,000 feet into the air, the crowd below knew the new year had arrived. “No more beautiful picture was ever limned in fire on the curtain of midnight,” The Times said in its lead news article on Page 1, using the cool, dispassionate, objective style of writing for which it was renowned. “From base to dome, the giant structure was alight — a torch to usher in the new born, a funeral pyre for the old which pierced the very heavens.”

After two more years of pyrotechnics, The Times found a less flammable way to signal the moment of midnight: an iron-and-wood ball, five feet in diameter, on which 100 25-watt bulbs were mounted. It was to be lowered down a flagstaff at midnight on Dec. 31, 1907.

A spokesperson for the Times Square Alliance confirmed to Snopes that this will truly be the first time that crowds will be prohibited from gathering to celebrate New Year's Eve.

The streets won't be completely empty, however. The New York Times reports that there will be a few hundred people (compared to hundreds of thousands in previous years) gathered for the celebration, including dozens of front-line workers:

This New Year’s Eve, just a few hundred will gather in the square — dozens of frontline workers among them — and only then by special invitation. With temperatures checked and face masks secured, they will represent a nation holding a mirror to the lips of 2020 to confirm that there is no fogging, that the year has mercifully ceased to be.

It should also be noted that this is not the first time festivities in Times Square have been impacted by current events. During World War I, Times Square was open to the public, but the festivities were rather subdued. On Jan 1, 1918, The New York Times wrote that the new year "slunk in with rubber shoes on": 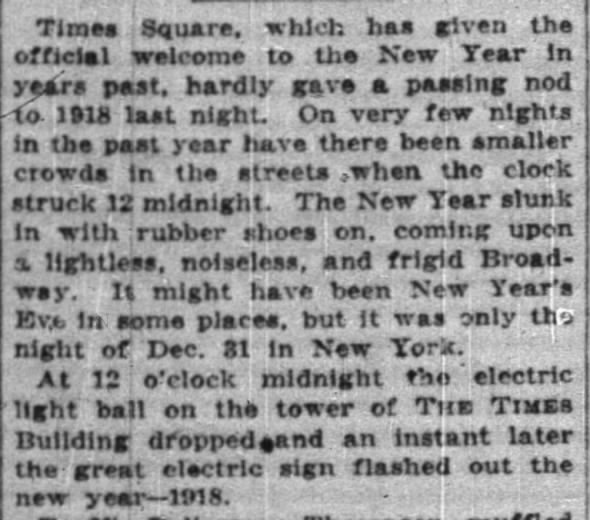 The following year, the war was over, and according to a Jan. 1, 1919, article from the Brooklyn Eagle, the city was to have its "First Real New Year's Eve in 3 years." This new year's took place in the middle of the 1918-19 influenza pandemic. While many people still gathered in Times Square in celebration of the new year and the end of the war, this may have helped spread the disease. The CDC notes that a "third wave" of the pandemic arose around this time, and in January 1919 "seven-hundred and six cases of influenza and 67 deaths [were] reported in New York City, triggering fear of a recurrence of severe flu activity."

The New Year's festivities were also subdued during the second world war. In 1942 and 1943, for instance, no ball was dropped in Times Square, nor were there any fireworks or bright neon displays, due to dim-outs related to World War II. While these dim-outs (cities turned off their lights as protection against air attacks) made the festivities a little less bright, crowds still gathered in Times Square during these years.

It will be furious and festive - this New Year's Eve. The night clubs will be jammed - more than ever, this year, they say. So will the theaters and the restaurants.... and yet, it's going to be different. The cast of war lies over New York. The fabled lights, the long miles of neon tubing and the winking spectaculars of Broadway are dimmed out.

So in the 1940s, the New Year's Eve celebrations in Times Square saw crowds, but no ball drop and no bright lights. In 2020, the celebration will feature a ball drop, but no crowds.

The Times Square Alliance writes that people can celebrate virtually this year by watching a live stream of the celebration.

Every year as the clock nears midnight on December 31, the eyes of the world turn once more to the dazzling lights and bustling energy of Times Square. Anticipation runs high. New Year's Eve at the symbolic center of New York City has become more than just a celebration — it's a global tradition.

The world holds its breath, and cheers as the clocks strike twelve.

As the famous New Year's Eve Ball descends atop One Times Square, countless people watch Times Square, nationwide, and throughout the world and are united in bidding collective farewell to the departing year and expressing joy and hope for the year ahead.

Due to the ongoing COVID-19 pandemic, NYE 2021 will NOT be open to the public this year — but there will be live performances, and we hope all of you will enjoy the virtual celebrations safely from the comfort of your own home. New Year's Eve 2021 might look a little different than usual, but one thing that will never change is the ticking of time and the arrival of a New Year at midnight on December 31st. Celebrate with us virtually in an enhanced celebration that will bring Times Square and the Ball Drop to you no matter where you are.