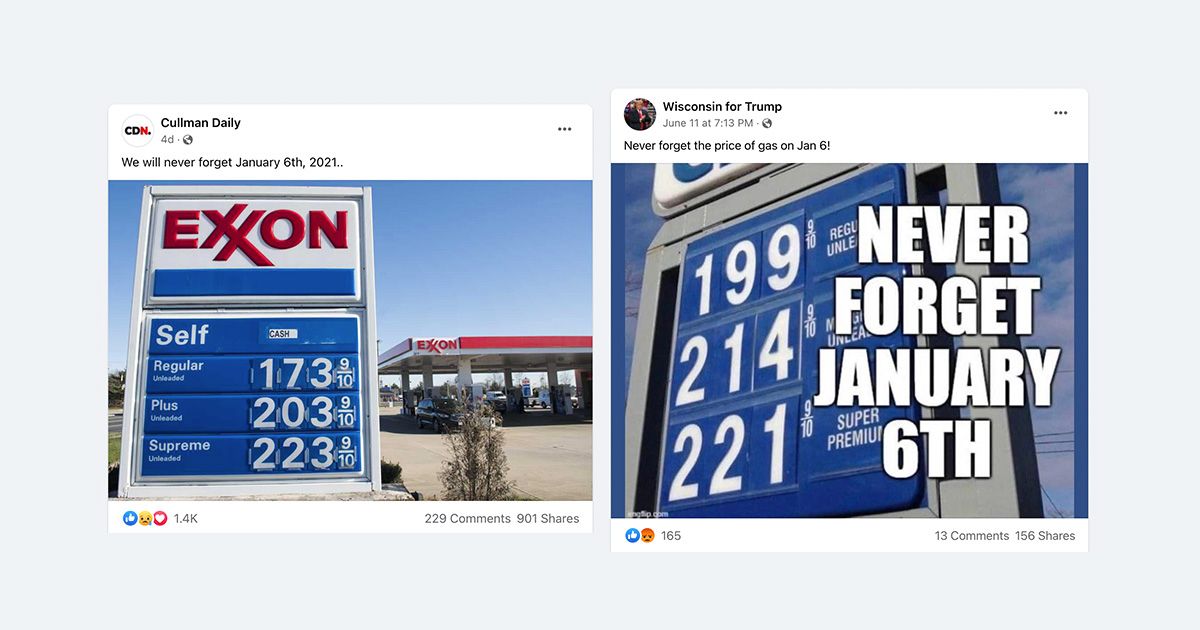 Facebook and Twitter posts and memes said to never forget January 6th and showed gas prices instead of images of the Capitol riot.

Claim:
Social media posts with pictures of gas prices and captions urging people to "Never forget January 6th" accurately documented the cost of fuel on the day of the 2021 U.S. Capitol riot.
Rating:

The gas prices pictured in two different shared pictures did not reflect the national average price for regular unleaded gasoline on Jan. 6, 2021. Further, reverse image searches found that both photographs were taken while former U.S. President Barack Obama was in his second term in the White House.

On June 12, 2022, the Cullman Daily Facebook page, which is managed by a self-described "conservative and Christian news organization," posted a picture of an Exxon gas station sign showing the price for regular unleaded fuel at $1.73 per gallon, with the caption, "We will never forget January 6th, 2021." At the time that post was published, U.S. gas prices had just reached a record high of $5 a gallon.

The "Never forget January 6th" Facebook post was created when a U.S. House panel was conducting televised hearings to lay out evidence about events leading up to the day of the U.S. Capitol riot. On that day, Jan. 6, 2021, 140 law enforcement officers were injured as a result of the actions of a mob of supporters of then-U.S. President Donald Trump, who lost the 2020 U.S. presidential election. According to CNBC, Capitol Police Officer Brian Sicknick died the day after the riot, and at least four other officers later died by suicide.

As for the accuracy of the "Never forget January 6th" Facebook post, in reality, the national average price of regular unleaded gasoline on Jan. 6, 2021, was between $2.25 and $2.31, not $1.73, according to the U.S. Energy Information Administration (EIA).

Further, the photograph in the post was captured in Woodbridge, Virginia on Jan. 5, 2016, five years before the violence at the Capitol. At the time, former U.S. President Barack Obama was serving his second elected term in the White House. Future U.S. President Joe Biden was Obama's vice president for both terms. (EIA numbers showed that the national average price of regular unleaded gasoline in early January 2016 was around $2.02 per gallon.)

We also found that a second picture of gas prices was used to promote a "Never forget January 6th" message, again in reference to the Jan. 6 Capitol riot. The photograph in these posts was shared on Facebook and Twitter in June 2022:

However, again, this picture was somewhat misleading, both because of the prices displayed on the sign and the origins of the photograph. The picture was captured at a Citgo gas station in January 2015, also when Obama was president and Biden was vice president. (In January 2015, the national average for regular unleaded gasoline ranged between $2.04 and $2.21 per gallon.)

In early 2020, when Trump still occupied the White House, gas prices fell due to a dramatic decrease in demand for gasoline following the onset of the COVID-19 pandemic. Basically, fewer drivers on the road meant less gasoline purchased, which drove down costs.

More than two years later, when U.S. President Joe Biden was in his second year in the White House, gas prices reached the aforementioned record high national average of $5 per gallon. The Associated Press reported that a variety of non-political factors were believed to have contributed to higher gas prices not just in the U.S., but around the world:

Global oil prices have been rising — unevenly, but sharply overall — since December. The price of international crude has roughly doubled in that time, with the U.S. benchmark rising nearly as much ...

Russia’s invasion of Ukraine and the resulting sanctions by the United States and its allies have contributed to the rise. Russia is a leading oil producer. The United States is the world’s largest oil producer, but U.S. capacity to turn oil into gasoline is down 900,000 barrels of oil per day since the end of 2019, according to the Energy Department.

Tighter oil and gasoline supplies are hitting as energy consumption rises because of the economic recovery.

The reporting also mentioned that the record high was likely reached in part due to demand for gasoline for all of the travelers who hit the road around the Memorial Day holiday.

In sum, two pictures were making the rounds on social media with captions that read, "Never Forget January 6th." Neither photograph accurately represented the national average gas price on Jan. 6, 2021, the day of the Capitol riot. In fact, both pictures were captured years before, while Obama was president and Biden was vice president.

Note: As of June 2022, more than 800 people had been arrested for their alleged participation in the violent Jan. 6 Capitol riot.