Water is water, regardless of how many times it has boiled. The assertion that it becomes toxic rests on the scale-challenged mechanism of concentrating harmful components already present in the water. 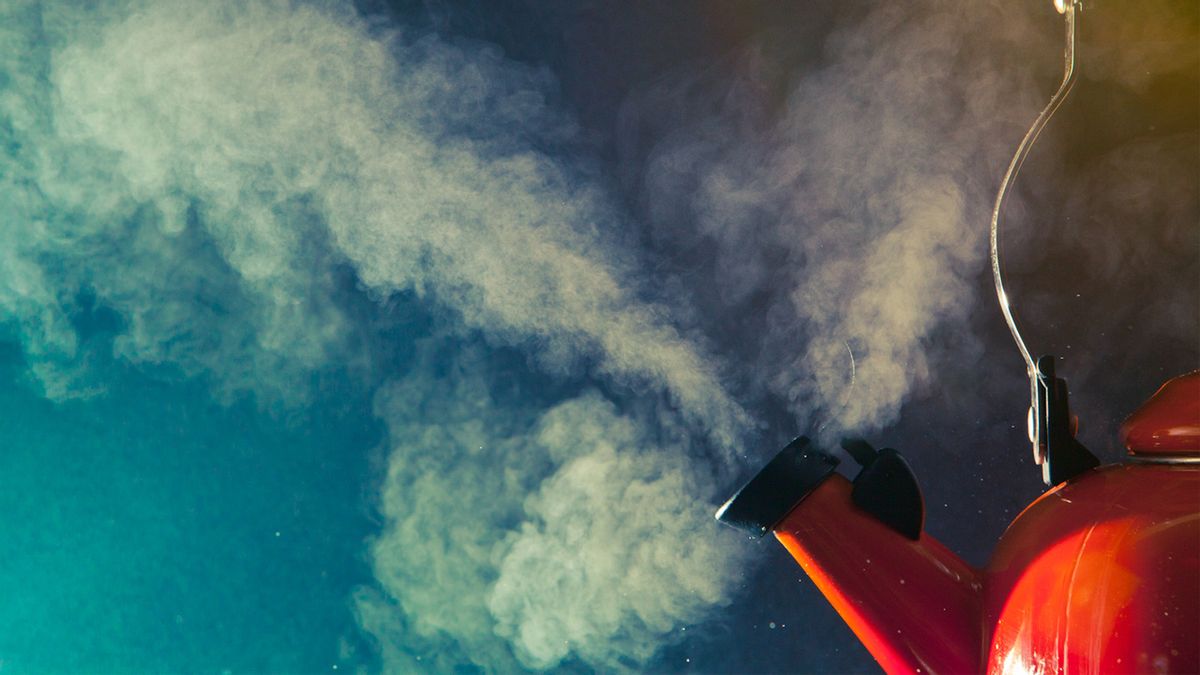 Claims that boiling water multiple times comes with health risks have been around in various forms for years. A spate of posts on a variety of alternative health websites in 2015 added to the hysteria, with claims of all sorts of damaging health effects from reboiled water. A post from “Healthy Holistic Living” is representative of the claims made in many locations:

It’s something they never taught us in chemistry class, but really should have. When we boil water, the chemistry of it changes, which is usually a good thing as it boils out volatile compounds and dissolves [sic] gases. This is why boiling water mostly ensures that it’s safe to drink.

If water is left boiled too long or is reboiled, the chemical compounds change for the worse. By leaving your water to boil down, you’re actually concentrating many harmful chemicals instead of getting rid of them … The same thing happens when you reboil water, as the compounds concentrate and increase the risk of ingesting certain chemicals.’

These chemicals could include arsenic, nitrates, and fluoride. Even the minerals that are healthy for us can become dangerous when concentrated, such as calcium salt which can lead to kidney stones and gallstones when taken excessively.

The only scientific principles at play here are the concepts of evaporation and concentration, which more than likely are a component of any chemistry class. Boiling water causes it to evaporate but leave behind heavier impurities that are likely dissolved in the water, increasing their concentration. Aside from portraying middle-school science as some sort of secret health scare, these posts also, as is so often the case, ignore any discussion of scale.

The implication that the water itself somehow changes into new toxic chemicals in the absence of any other factor, merely through the process of boiling, is not factual. Discussion of increasing concentrations of “arsenic, nitrates, and fluorides”, therefore, requires the presence of some amount of them in your water to begin with.

Arsenic is an undeniably toxic chemical that can, indeed, be found in both public water supplies and in groundwater. Arsenic poisoning is a major health problem in places like Bangladesh, where high levels of naturally occurring arsenic occur due to the local geology. Studying areas like these, the World Health Organization has concluded that chronic health problems may occur when concentrations reach around 50 ug/L:

In 2010, the Joint FAO/WHO Expert Committee on Food Additives (JECFA) re-evaluated the effects of arsenic on human health, taking new data into account. JECFA concluded that for certain regions of the world where concentrations of inorganic arsenic in drinking-water exceed 50–100 μg/litre, there is some evidence of adverse effects.

Assuming the water you are boiling contains the maximum allowable level considered by the EPA of 10 ug/L (which is the same as the limit recommended by the WHO), you would need to boil 80% of your water away to reach this concentration.

While it is not inconceivable, especially if you are a somewhat scatterbrained individual, to boil away this amount of water from time to time, these numbers apply to chronic exposure, and as such would require all of the water you consume for every use to be boiled down by 80% — even your regular drinking water. This requirement is made even more unlikely by the fact that boiling 80% of water away in a teakettle may not leave enough for even a single cup of coffee or tea.

The numbers get even more absurd when scaled up to the amount that would cause acute arsenic toxicity (i.e the amount you would have to consume all at once to see fairly immediate and serious negative health consequences). Scientists have estimated that acute toxicity occurs when an individual consumes 0.6 mg of arsenic per kg of bodyweight per day day. Using the average American female body weight of 166 lbs (75 kg), one would have to boil over 2600 gallons (nearly 10,000 L) of water down an amount that could fit in a regular coffee cup.

Nitrates, a broad group of naturally occurring chemicals containing a nitrate ion (NO3-), can indeed be found in water (and pretty much everything else one runs into on a daily basis) The concern raised in viral anti water reboiling posts is the conversion of organic nitrates to a group of carcinogens called nitrosamines:

When nitrates are exposed to high temperatures, they convert to nitrosamines, which are carcinogenic.

Nitrates have been linked to many diseases such as leukemia, non-Hodkin [sic] lymphoma, and different cancers, including colon, bladder, ovarian, stomach, pancreatic, and esophageal cancer.

While the risks posed by nitrosamines, a broad group of chemicals, are factual, the claim that nitrates (in general) in water will be converted to nitrosamines solely through the action of boiling is false, as their formation in drinking water requires specific precursor molecules and environmental conditions to form. The most important source of these chemicals, of which a compound named NDMA is most common, is wastewater (which generally contains high levels of organic nitrogen) that has been disinfected with chloramine, a process called chloraminiation:

Mechanistic studies and results from occurrence studies suggest that the most important mechanism for nitrosamine formation during disinfection is the chloramination of amine precursors.

This means that the formation of these dangerous chemicals has everything to do with what is in the water and, outside of increasing concentration through water loss, nothing to do with boiling it. A 2011 study investigated the effect of boiling water with two different nitrosamines showed that the amount was either unchanged after 20 minutes of boiling, or reduced:

The total amount of NMOR [a nitrosamine] in boiled water did not change significantly in 5-min samples, but apparently decreased with boiling time in 10- and 20-min samples, corresponding to 18.7 and 31.8% decreases, respectively, compared to the initial amount.

However, the total amount of NDMA [the most important nitrosamine] did not vary with time. This suggests that NMOR is thermally labile whereas NDMA is thermally stable. An additional study needs to be conducted on the by-products of the thermal breakdown.

Now that we have cleared up the fact that the only way boiling affects nitrosamine in water is that it removes water (thereby mathematically increasing its concentration), we are returned once more to similar scale issues found in the above discussion of arsenic. Nitrosamines in water are a relatively new concern, and as such there is not much information about their variability from different water sources. A 2009 survey of drinking water in Japan found that:

The takeaway point here is that there is considerable variability of nitrosamines in drinking water caused by local land use factors and water treatment methods. The effect of that original variability is far more significant than any changes that could arise from increasing the concentration of those chemicals by boiling away a fraction of the amount of water contained in a tea kettle.

As the “Healthy Holistic Living” page states, Fluoride is indeed added to water in many municipalities around the world in an effort to reduce cavities — a source of wild conspiracy theories for some and of health claims of varying merits from others:

Many studies have been done over the controversial chemical fluoride and its presence in drinking water. The fact is, it’s there and it could pose a threat to your health. Despite the proof of the dangerous effects of fluoride, the government insists to keep it in our water.

Harvard University took data from over 27 studies that were carried out for 22 years and linked fluoride exposure to neurological and cognitive function in children. A more recent study completed in 2013 links fluoride to lower infertility rates [presumably the author meant higher infertility] in male mice.

Oddly enough, the post makes two faulty claims of health problems while ignoring the more legitimate concern. The science linking IQ and water fluoridation, based on the study mentioned above, is deeply flawed and relies on research that was inadequate to test such a link, as we discussed in a post in which we rated that connection as false.

The laboratory study with mice mentioned above, in addition to the usual problems of scaling animal studies up to human studies, found problems with fertility only at extremely high concentrations, per the study:

Our study showed that fluoride reduced the ratio of chemotactic sperm [sperm capable of following a chemical gradient to the egg] in mice by administrating with 100 and 150 mg [of sodium fluoride per liter] in drinking water for 8 weeks.

Currently, the EPA’s maximum allowable limit for fluoride in drinking water is 4 mg/L with a voluntary recommendation of 2 mg/L. When fluoride is added to a public water supply, the target concentration is 0.7 mg/L — both multiple orders of magnitude less what was used in the mouse study, without even taking into account the relative size difference between humans and mice.

The most significant and demonstrable health effects from fluoride in drinking water is a condition called dental fluorosis, a staining or pitting of teeth caused by too much fluoride intake. The risk of this condition is greater for children, and could occur at levels found in drinking water, according to the Centers for Disease Control and Prevention:

In some regions of the United States, public water systems and private wells contain a natural fluoride concentration of more than 2 mg/L, and at this concentration, children 8 years and younger have a greater chance for developing dental fluorosis, including the moderate and severe forms. These children should have an alternative source of drinking water that contains fluoride at the recommended level.

In this case, fluoridated water could pose a risk to children regardless of its being boiled with a resulting minor increase fluoride concentration, making the argument that boiling water poses a fluoridation risk somewhat moot. Even if it weren’t, the issue of scale as it applied to the other chemicals of concern, still needs to be considered here.

The most aggressive estimate for the concentration at which acute fluoride toxicity may occur (promoted in an expressly anti-fluoridation journal of questionable scientific merits) is 0.8 mg of fluoride per kg of body weight. While this number is an order of magnitude less than almost every governmental health organization on the planet, we can still run the same experiment we did with arsenic using the questionable figure.

Assuming the water you are boiling contains the maximum allowable level of flouride considered by the EPA (4 mg/L) and you have an average American female body weight of 166 lbs (75 kg), you would need to concentrate 15 liters of water into a 12 oz cup of tea of coffee.

The risks posed by reboiling water are minimal, due to the scale of concentration needed to bring any dissolved component of water to a relevant or harmful concentration. If the change of concentration caused by boiling off some water a couple of times results in dangerous water, that water was almost certainly dangerous to begin with.