How Have the Net Worths of Presidents Changed?

An image comparing changes in the financial status of former and current United States presidents is not particularly revealing. 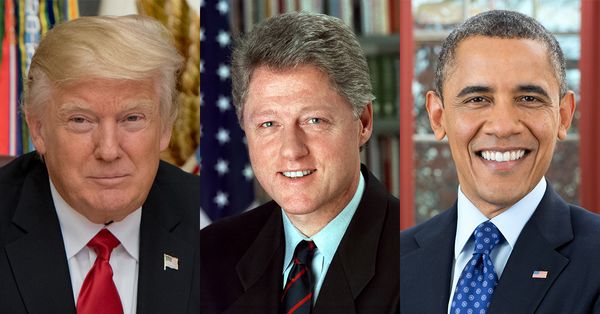 Claim:
An image contrasts changes in the financial status of former and current U.S. presidents.
Rating:

An image comparing changes in the financial status of former and current United States presidents was widely shared on social media at the end of 2017, with minimal text suggesting that the data it presented was particularly revealing of something (without providing any detail about what that "something") might be: As for the hard data, we won't dwell on precise numbers because net worth figures are typically estimates that are at least partially based on assets with fluctuating valuations, and federal election disclosure laws have only required that candidates list their assets and liabilities in ranges rather than specific amounts. However, in general we can note that the information in the image is at least within the ballpark of reasonable.

As of 2017, the Clintons were estimated to have made $240 million since Bill Clinton left office in 2001, the Obamas' combined net worth was reckoned to be about $24 million, while the Trumps' net worth was thought to have dropped to about $3.1 billion. Suffice it to say that the Clinton and Obama families have done very well for themselves since leaving the White House, but the Trumps have realized no similar windfall (and have possibly seen their overall wealth decline a bit).

The comparison in this image is one of apples and oranges, however, and therefore it reveals nothing remarkable or surprising. It contrasts two men who each served eight years as President and are no longer in office with one man who has only been the U.S. chief executive for a year and still occupies that position. The longer one holds high office, the more opportunity one has to establish connections and build experience that might prove financially lucrative later on, so obviously two men who sat in the White House for eight years each has a considerable advantage over the one who has barely been in Washington for a year.

More important, though, is that former Presidents Clinton and Obama are former presidents who have returned to private life, and thus they can avail themselves of many money-making opportunities common to ex-presidents -- writing books, giving speeches, consulting for private companies, holding board seats, advising businessmen and politicians -- that are simply not available to a sitting president. But for the incumbent chief executive, the position of President of the United States affords its holder little time to manage any outside business interests, and conflict of interest laws make it difficult for presidents to engage in profitable business ventures while they're serving as public officials. (Most sitting presidents choose to put their business interests into blind trusts or otherwise delegate their day-to-day management to others during their terms of office.)

This image also conveniently omits data that demonstrates the money-making proclivities of former presidents to be neither an aberration nor an activity limited to Democrats: George H.W. Bush saw his fortune grow from $4 million in his pre-presidential days to $23 million in 2017, and his son, George W. Bush, began his presidency with $20 million and is now reportedly worth $35 million.

Finally, nothing about this subject has anything to do with any presidents, current or former, "stealing" anyone's money. Whatever controversies may have surrounded Presidents Clinton, Obama, and Trump so far, none of them has been accused of enriching themselves by looting the public treasury.