Rumor: Photograph shows an avalanche that occurred on Mt. Everest after the 2015 Nepal earthquake.

Claim:   Photograph shows an avalanche that occurred on Mt. Everest after the 2015 Nepal earthquake. Origins:   Shortly after the Gorkha earthquake struck Nepal on 2015,

killing more than 7,000 people, images of the devastation it wrought began circulating online. As is often the case in the modern world, however, many of the images

circulated online were not actually photographs of that event, but repurposed pictures taken at different times and places.

The above-displayed photograph, for example, doesn't capture an earthquake-related avalanche on in the aftermath of the 2015 Nepal picture antedates that event by several years and seems to get trotted out every time a similar occurrence takes place. A year earlier, for example, the same photo was used to illustrate second-hand reporting of a deadly avalanche that killed twelve people on the famous mountain: Before that, the same photo also had previously popped up in an October 2013 report of an Everest avalanche that took the lives of four victims: And before that, it appeared in a September 2010 blog post referencing an avalanche that had injured several sherpas on an Everest climb: The original image appeared way back in 2008 on the International Mountain Guides web site, linked from a 2008 entry in a blog about a Nepal Trek and Ama Dablam Climb, and captioned as follows:

Everest Base Camp at 17,300'. The peak visible here is Everest's West Shoulder, with the Khumbu Icefall stretching up to the right. Though camp is set on an active glacier which creaks and groans as it inches downhill, and avalanches rumble down around base camp daily, the camp is positioned in an area known to be safe from glacier activity and avalanche or rock fall. After a while, only the really big avalanches draw any attention, though even this seemingly close one will not even dust base camp. 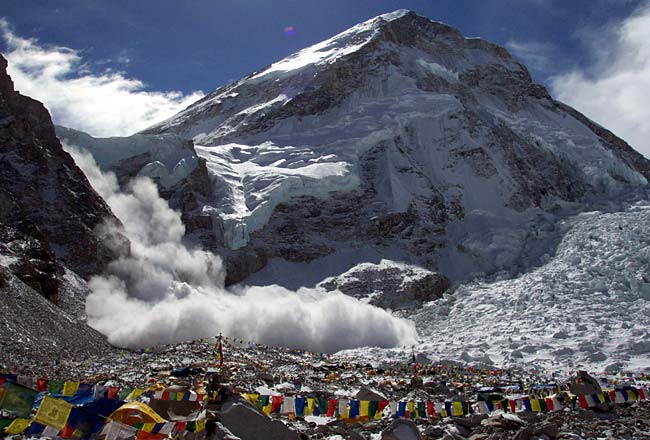