Was a Nazi Submarine Found in the Great Lakes?

Who knows just what's lurking at the bottom of Lake Ontario? 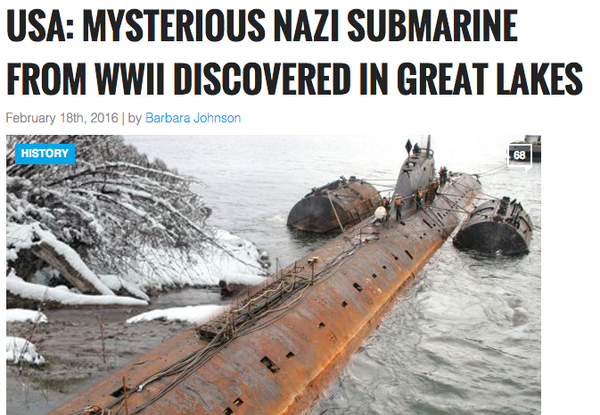 On 18 February 2016, the web site World News Daily Report published an article reporting that a Nazi submarine had been discovered in Lake Ontario:

Niagara Falls — Divers from the U.S coast guard took part this morning, in a delicate wreck recovery operation to bring to the surface a Nazi submarine discovered two weeks ago at the bottom of Lake Ontario.

The U-boat was spotted for the first time by amateur scuba divers in late January and they had contacted the authorities. Archaeologists associated with Niagara University of and master divers from the U.S Coast Guard were mobilized on site to determine what it was, and they soon realized that they were dealing with a German submarine that sank during World War II ... Professor Mark Carpenter, who leads the team of archaeologists, believes that the U-boat could have traveled up the St-Lawrence River, all the way to the Great Lakes, where it intended to disturb the American economy.

As with all of World News Daily Report's content, the Nazi sub story was entirely fabricated. The article used an unrelated image of a rusting, decommissioned Russian submarine from the Cold War era to illustrate the claim, not a picture of a genuine World War II-era German