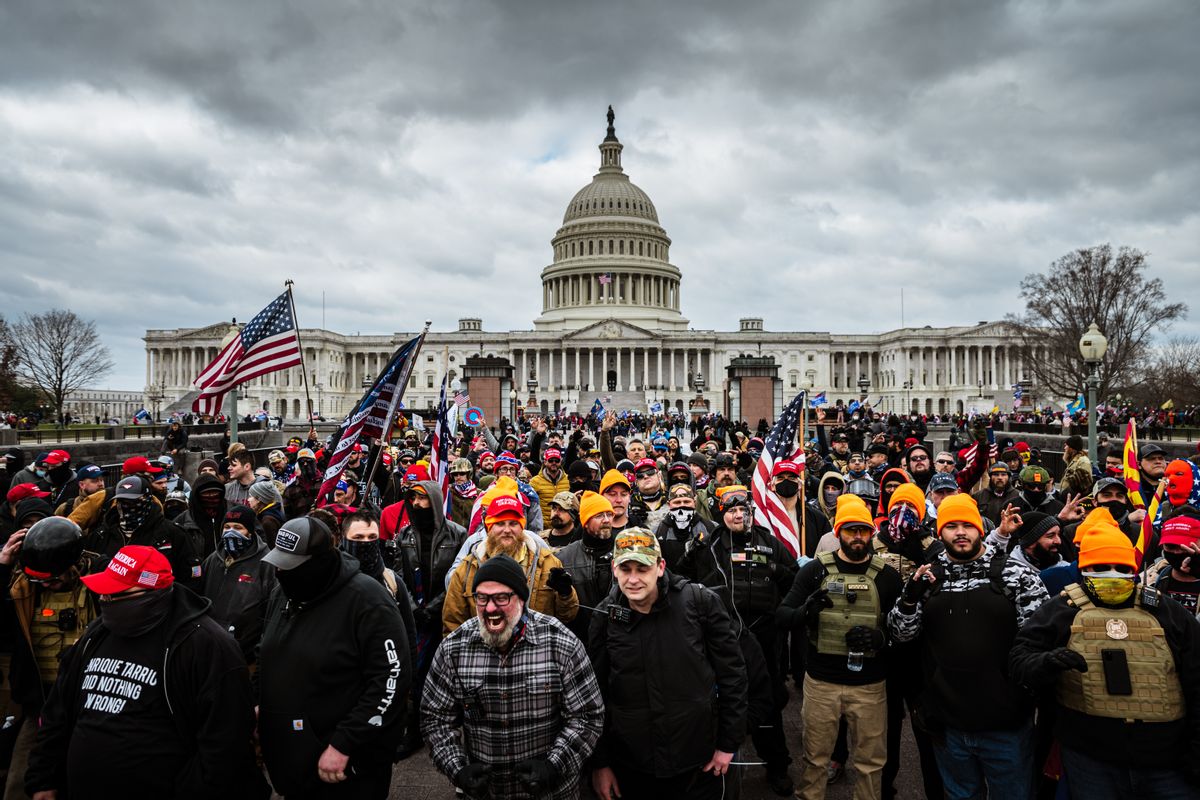 A Jan. 4 memo authored by Miller and obtained by Snopes required Department of Defense officials to seek his approval before D.C. National Guard members could use weapons at upcoming pro-Trump demonstrations.

The memo did not order any person or entity to "disarm" — or take weapons away from — National Guard members ahead of the deadly Capitol siege.

After the U.S. Capitol insurrection in January 2021, Snopes readers asked about the legitimacy of a viral document that left-leaning websites framed as an attempt by a member of former President Donald Trump's cabinet to suppress the ability of National Guard forces to provide law enforcement during the gathering of Trump supporters rallying to try to overturn the 2020 election.

For example, the Daily Kos, a self-described online hub of progressive media and activism, reported on Jan. 29:

[On. Jan. 4], former acting Defense Secretary Christopher Miller issued a memo to the secretary of the Army placing some extremely unusual limits on National Guard forces for that event. It’s not a to-do list. It’s a list of thou shalt nots. A long list. A list that says guard forces can’t arrest any of the pro-Trump protesters, or search them, or even touch them. And that’s just for starters. [...]

It’s clear that these restrictions would have absolutely prevented any guard forces from trying to protect any location.

Before we directly address the claim, let us unpack the basis of the above-mentioned articles. The Daily Kos' original story included a hyperlink to an authentic tweet by New York Times congressional reporter Luke Broadwater on Jan. 28. The reporter's tweet included a digital image of what appeared to be a Jan. 4 memo to former Army secretary Ryan McCarthy and signed by Miller — whom Trump appointed as acting Pentagon chief in November 2020, just days after President Joe Biden was announced the winner of the election.

In early February, we reached out to Broadwater to learn where, how, or under what circumstances he obtained the document. He told us "it was a leak," or that an anonymous person or group within government or law-enforcement released the document to The New York Times.

While no evidence exists to cast doubt on the legitimacy of the document displayed in the tweet, we sought to independently verify its authenticity. Citing the Freedom of Information Act, Snopes submitted multiple requests for a copy of the Jan. 4 record from various record-keeping centers within federal government.

On March 3, the U.S. Senate's Homeland Security and Governmental Affairs Committee fulfilled our request after its chair, Sen. Gary Peters, entered Miller's memo into the committee's public database of records.

Committee spokespeople emailed us copies the document that indeed imposed restrictions on the D.C. National Guard (DCNG) during planned demonstrations by Trump supporters in the coming days. It read, in part:

Without my subsequent, personal authorization, the DCNG is not authorized the following:

You may employ the DCNG Quick Reaction Force (QRF) only as a last resort and in response to a request from an appropriate civil authority. If the QRF is so employed, DCNG personnel will be clearly marked and/or distinguished from civilian law enforcement personnel, and you will notify me immediately upon your authorization.

The document written by the Trump appointee did not order any person or entity to take away weapons from Guard members.

Rather, it required McCarthy, who oversees the DCNG, to request approval from the defense secretary in order for Guard members to use weapons, helmets, body armor or riot control agents — as well as to share equipment with other law-enforcement agencies — during the preplanned gatherings of Trump supporters on Jan. 5 and Jan. 6.

Rewind a few days, and, according to the Department of Defense, D.C. officials requested that the district's Metropolitan Police department — not a federal agency — lead security efforts during the pro-Trump events, which were widely marketed as gatherings of Trump supporters to try to send a message to Congress to halt a ceremonial vote affirming Biden's win.

A Jan. 5 document signed by McCarthy and obtained by Snopes (displayed below) showed the Pentagon ultimately fulfilled that request, saying that its troops would provide support for the district police department or Capitol Hill Police, should they need it. Some 340 Guard members were planning to control crowds at metro stations and enforce street closures during the events, and a "Quick Reaction Force" comprised of 40 Guard officers was standing by, no matter what.

"DCNG Soldiers will store their helmets and body armor within vehicles or buildings in close proximity to their positions," McCarthy's memo read. "In the event of an elevation of the threat requiring immediate donning of this equipment for self-defense, DCNG leadership will immediately notify the Secretary of Army."

That decision by the Department of Defense, as well as the request for autonomy from D.C. officials, followed the Guard's controversial response to protests against police violence following George Floyd's death in summer 2020. Politico reported:

While some of the early protests did include looting and damages to local businesses, [D.C. Mayor Muriel] Bowser never called in the National Guard.

Against the mayor's wishes, Trump ordered Guard personnel to the city, where the military faced backlash for using overly aggressive crowd control tactics against peaceful protesters, including flying helicopters low over the city to create rotor wash, an action used in overseas conflicts.

“Any time we would employ troops and guardsmen in the city, you had to go through a rigorous process. As you recall, there were events in the summer that got a lot of attention, and that was part of this," William J. Walker, the DCNG's commanding general, said in an interview with The Washington Post.

Walker was referring to the guidelines (like those in the Jan. 4 and Jan. 5 memos) that required the highest-level approval for the Guard to fully launch into law-enforcement mode.

As a result of such restrictions, Walker told The Washington Post that when he received a panicked phone call from Capitol Hill Police about the extremists preparing to break into the Capitol on Jan. 6 (which occurred around 1:50 p.m., per the defense department's timeline) he could not immediately deploy Guard members to help. He instead needed to wait for approval from McCarthy, who then waited for an answer from Miller.

At 3 p.m, Miller approved full activation of the DCNG (1,100 members) to help district and Capitol Hill police and directed those troops to secure the Capitol, the department's timeline showed.

(See here for our fact check into a separate claim that the Department of Defense initially denied a request by D.C. officials to deploy the Guard.)

In sum, it was true that Miller issued a Jan. 4 memo requiring Guard leaders to seek prior approval before using weapons during the pro-Trump protests. However, it was an inaccurate portrayal of that order to claim that the Trump appointee "disarmed" — or took weapons away from — Guard members before the demonstrations, like The National Memo alleged. For those reasons, we rate this claim a "mixture" of false and true information.

This report was updated after Snopes obtained a copy of Miller's Jan. 4 memo. The update corroborated the New York Times reporter's tweet and added context about McCarthy's response to D.C. officials' request to lead law-enforcement efforts during the upcoming protests.