The social media trend has emerged in recent years, centered around the final days of September. 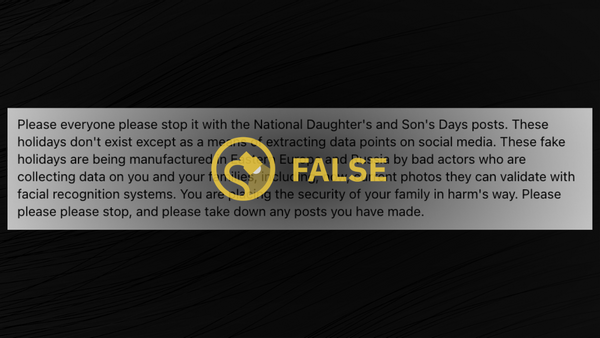 Claim:
The "National Daughters Day" social media trend is no more than a "Russian and Eastern European" plot to obtain private details from online photographs.
Rating:

In September and October 2021, social media users enthusiastically shared a stark warning about the dangers of celebrating "National Daughters Day" online. The day, usually marked on or around Sept. 25, is a relatively recent initiative (although it has much older precursors), and is not an officially designated "special day" in the United States. It is usually celebrated informally, with social media users posting messages of appreciation for their daughters, often accompanied by photographs and the hashtag #NationalDaughtersDay.

However, one widely shared "copy and paste" message advised readers of a distinctly sinister agenda behind the trend:

...Please everyone please stop it with the National Daughter's and Son's Days posts. These holidays don't exist except as a means of extracting data points on social media. These fake holidays are being manufactured in Eastern Europe and Russia by bad actors who are collecting data on you and your families, including, now, current photos they can validate with facial recognition systems. You are placing the security of your family in harm's way. Please please please stop, and please take down any posts you have made... The exact origins of a "National Daughters Day" in late September are somewhat unclear, and it's possible that some malicious actors have used the raft of social media photographs that accompanies it for nefarious purposes (though even this hypothesis suffers from a lack of affirmative evidence, and a significant logical flaw).

However, the claim that the occasion exists only "as a means of extracting data points," or was "manufactured in Eastern Europe and Russia" is contradicted by the absence of evidence to that effect, as well as the existence of a far more plausible alternative — that the Sept. 25 date evolved alongside a recent innovation in India, namely "Daughter's Day," which falls on the final Sunday of September, and was originally intended as a way to combat the stigma historically associated with the birth of daughters, as well as gender discrimination and inequality.

As a result of these considerations, we are issuing a rating of "False" as to the claim that "National Daughters Day" is no more than a sinister plot by malevolent actors in Russia and Eastern Europe, to acquire personal data through social media posts.

The Evolution of "National Daughters Day"

The earliest reference to "National Daughters Day" that Snopes could find came in a December 1932 news article which referred to a celebration overseen by a Vermont chapter of the Daughters of Union Veterans. After that, there were stray references to various calendar dates, in news reports from 1939, 1940, and 1949.

In March 1950, U.S. Rep. Tom Steed, D-Okla., introduced H.R. 7938, a bill to designate "the second Sunday in April as National Daughters Day," but the legislation appears to have died in the House Judiciary Committee, and was not included in a list of bills passed by the 81st Congress.

Despite its not being made official, some Americans appear to have marked "National Daughters Day" in April during the 1950s, but from the 1960s onwards, talk of the day all but disappears from the archives. In 1992, the annual "Take Our Daughters to Work Day" tradition began, but references to a "National Daughters Day," as such, do not recur in the U.S. context until the 2010s.

In 2014, for example, a few stray references, on various dates, could be found on Twitter, but the following year, 2015, "National Daughters Day" content began to coalesce around the end of September, with Kris Jenner among the most prominent early celebrities to mark the occasion on social media.

Our examination of social media references to "National Daughters Day" since 2015 did not yield evidence consistent with its being part of a Russian or Eastern European plot, but rather suggested that it was chiefly spread via posts by influential celebrities, and then simply accepted by millions of social media users, over the past few years.

The timing of the day (the final week of September, typically Sept. 25 or 26) also strongly suggests an evolutionary link with "Daughters Day," which has been celebrated in India on the final Sunday in September, in recent years.

In a 2007 interview, Anil Moolchandani, managing director of the Indian greeting cards company Archies, claimed partial responsibility for coming up with the new occasion, and explained that the initiative was in part designed to combat gender discrimination in India:

Daughter's Day is the celebration of the girl child. Through this we are trying to drive home the fact that the daughter is as good as the son. We are trying to break to break age-old myth that a daughter is a 'cause' to be pitied and sympathized for... This occasion would also give an opportunity to parents to show their daughters how precious they are to them and reinforce the fact that a daughter, is in no way lesser than a son.

Two years ago government officials monitoring the census came to me to discuss the grim situation of the girl child and if Archies could do something to spread the message. Though nothing materialised from the government on this we were left with germ of an idea. As the original creator of beautiful days and a leader in the social expression industry we decided to do something about the plight of the girl child. We interacted with around 2000 people over emails. Also [we] met and discussed with parents, especially those with a son and a daughter, the upside of having a daughter.

In addition to these highly plausible alternative explanations for the emergence and spread of "National Daughters Day," the hypothesis that the trend is part of a plot to elicit and obtain private data from publicly posted photographs suffers from two major flaws.

Firstly, we could find no evidence that the trend was driven by such a plot. Secondly, that theory made little sense anyway. Social media users routinely post millions of photographs of themselves, their friends and their family members, including their children.

Nefarious actors wishing to harvest images in order to feed them into facial recognition algorithms would hardly be short on content to begin with, and the notion that they would need to secretly orchestrate a particular online trend in order to stimulate the production of data that is already readily available, simply does not check out.