Will There Be a Sequel to 'Napoleon Dynamite'?

Rumors that there would be a follow-up to the 2004 cult classic actually grew out of a fan-made poster and years-old rumors. 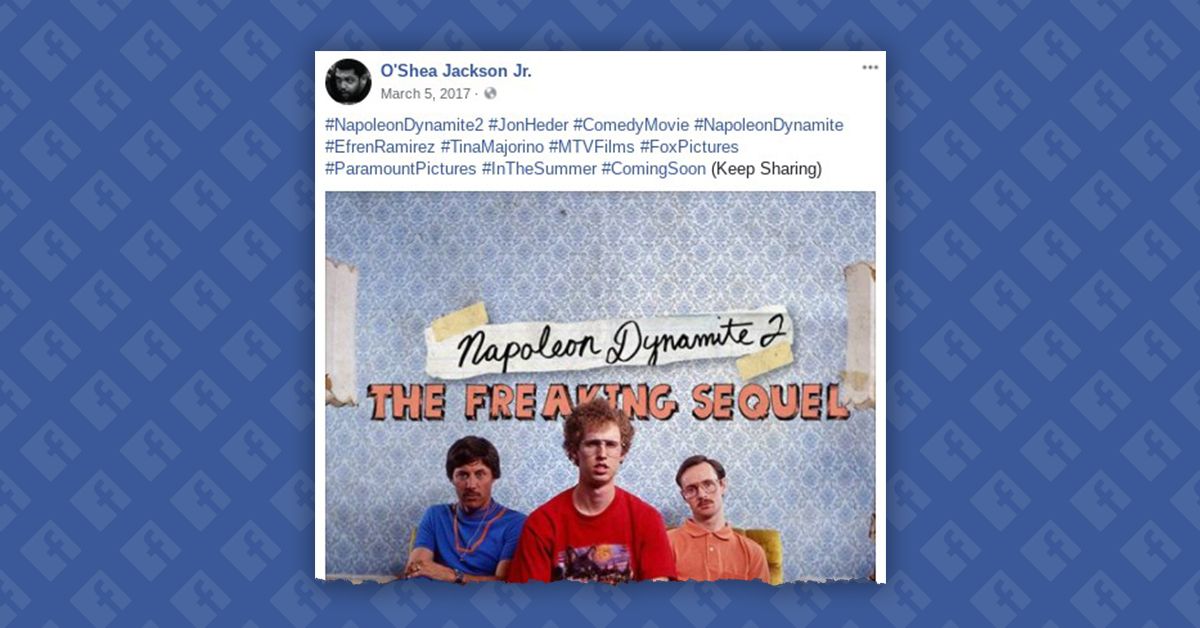 Claim:
A sequel to the movie 'Napoleon Dynamite' is in the works.
Rating:

Have you heard the sweet rumor about a Napoleon Dynamite sequel? Well, don't get your hopes up. It's just another movie sequel hoax.

The rumors about a sequel to the oddball cult classic have been periodically reappearing since the original film came out in 2004. This particular version of the rumor is based on a fan-made movie poster paired with an old gossip article: As convincing as it might appear, this poster was not created by a movie studio and was never shared in an official capacity to hype a new sequel. Instead, it was created by graphic designer Jack Gambro and can be found on his web site in the "conceptual" section:

This section contains conceptual projects unrelated to the organizations or individuals involved.

The gallery is a collection of unofficial artwork.

A 2006 article from CinemaBlend.com is also frequently shared by sequel-hungry fans:

Despite the article's clickbait title and web address, it doesn't actually report that a sequel has been confirmed. Rather, it reported that "there have been talks" about making a sequel (emphasis ours):

Napoleon Dynamite cost only $400,000 to make and grossed over $46 million worldwide. When a movie sports that kind of positive cost to profit ratio, you’ve got to assume there will be a sequel.

Evidently the folks behind the movie agree. Efren Ramirez, who played Pedro in Napoleon appeared on the Dallas radio show Pugs & Kelly this afternoon and confirmed that there have been talks about making a Napoleon Dynamite 2. He says most of the rumors circulating about other Napoleon projects, like a television show or a series of comic books are nothing but rumors, but he confirms that they are at least talking about making another movie.

There may have been talks about making a follow-up to the 2004 movie at some point, but in the years since its release there have been no official announcements about a Napoleon Dynamite sequel.