Did Pelosi Say It's 'Dangerous' to Let Voters Decide Trump's Fate in 2020?

The U.S. president took a misleading paraphrase by a Fox News host and claimed it was a direct quote. 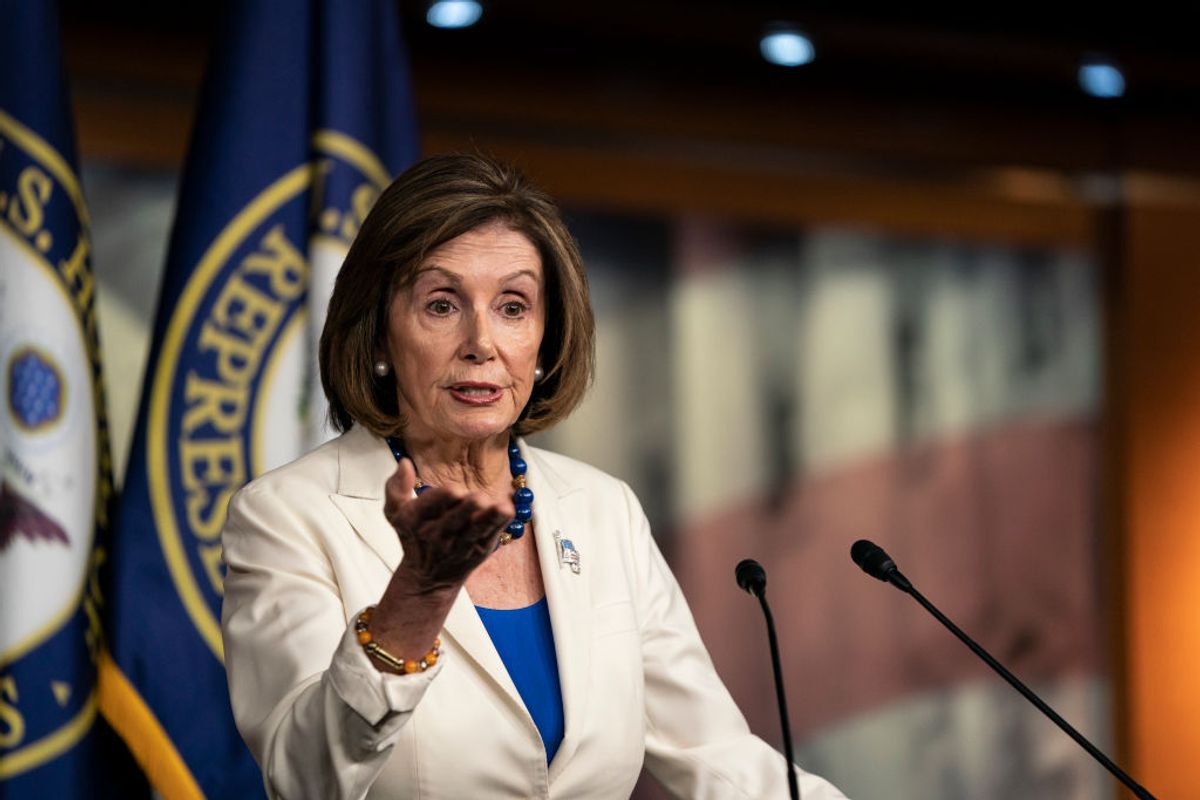 In late November 2019, U.S. President Donald Trump posted an inaccurate, late-night tweet in which he accused U.S. House Speaker Nancy Pelosi of stating that, "It is dangerous to let the voters decide Trump’s fate."

Nancy Pelosi just stated that “it is dangerous to let the voters decide Trump’s fate.” @FoxNews In other words, she thinks I’m going to win and doesn’t want to take a chance on letting the voters decide. Like Al Green, she wants to change our voting system. Wow, she’s CRAZY!

Democratic lawmakers in the U.S. House of Representatives are leading an impeachment inquiry against Trump based on whistleblower allegations that he attempted to extort the Ukrainian president by withholding crucial military aid while he pressed for dirt on a political rival. Trump has defended himself by characterizing impeachment proceedings as a political "witch hunt."

Pelosi never made the remark quoted in Trump's tweet, however. The words that Trump put in quotation marks and attributed to her were actually made by Fox News host Mike Emanuel.

Emanuel said, "House Speaker Nancy Pelosi circulating a memo to Democrats tonight, telling them it would be dangerous to let voters decide President Trump's fate when it comes to the Ukraine investigation." Emanuel made the comment during the Fox News program "Fox News @ Night," which airs between 11 p.m. and 12 a.m. Eastern Standard Time. Trump's tweet was posted shortly after the program aired.

The memo that Pelosi sent doesn't state that it would be dangerous to let voters decide Trump's fate in office. Her exact statement reads as follows:

The facts are uncontested: that the President abused his power for his own personal, political benefit, at the expense of our national security interests.

The weak response to these hearings has been, “Let the election decide.” That dangerous position only adds to the urgency of our action, because the President is jeopardizing the integrity of the 2020 elections.

It concludes, "None of us comes to Congress to impeach a President, but rather to make progress for America’s working families. However, our first order of business is our oath to support and defend the Constitution from all enemies foreign and domestic. As such, we are custodians of the Constitution and, For The People, defenders of our democracy."

Pelosi sees the upcoming 2020 election and the House impeachment inquiry separately. Her statement was a reflection of previous comments in which she has said legislators in Congress are duty-bound by the Constitution to move forward with impeachment proceedings, rather than dropping them simply because a presidential election is one year away. As the Washington Post reported, Pelosi made this distinction during a recent news conference:

During an Oct. 17 [2019] news conference, a reporter asked Pelosi “how important is it for impeachment to bleed over into an election year?”

Pelosi responded that “impeachment is about the truth and the Constitution,” whereas elections should deal instead with policy issues like gun control and climate change. “That has nothing to do with what is happening in terms of our honoring our oath of office to protect and defend the Constitution and the facts that might support,” Pelosi said.

Pressing Pelosi, the reporter asked: “At what point might you say, let’s just let the voters decide?”

“No, no. The voters are not going to decide whether we honor our oath of office,” Pelosi said. “They already decided that in the last election.”

Democrats took the majority away from Republicans in the 2018 U.S. House midterm elections, which many saw as a referendum on Trump's tenure in office. U.S. Rep. Al Green, who was also mentioned in Trump's tweet, was one of the first Democratic lawmakers to come out in favor of impeachment.

Pelosi, Nancy. "Dear Colleague on Latest Developments on For The People Agenda and the House's Impeachment Inquiry."   18 November 2019.