A photograph of the event shows a wooden box in front of a statue of George Washington. 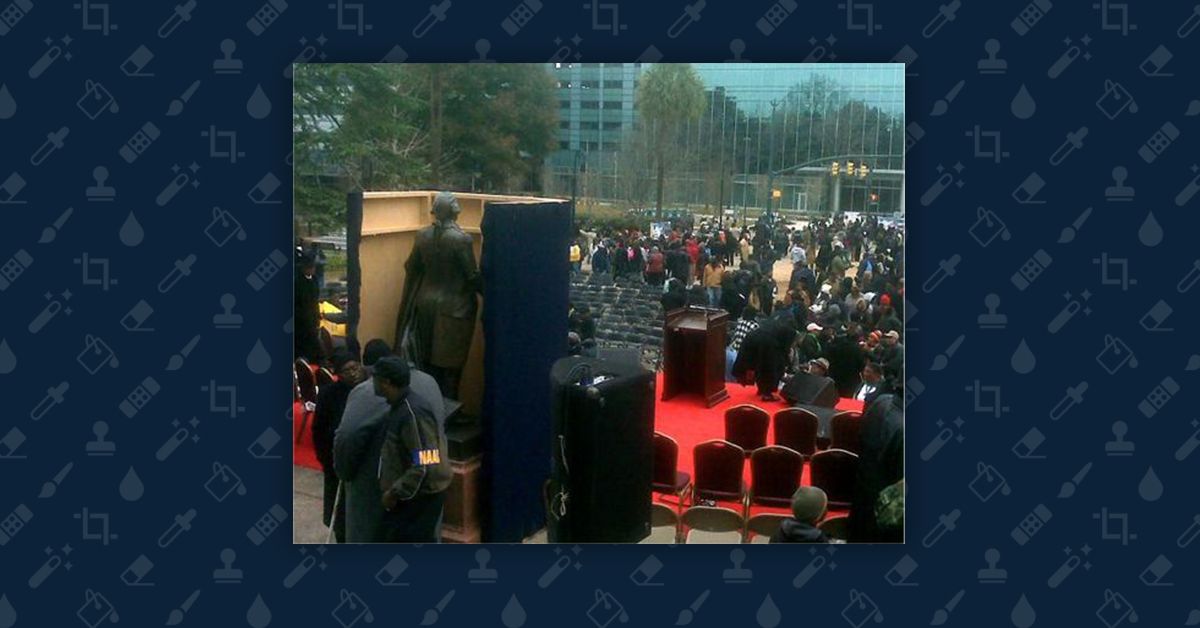 Claim:
A photograph shows a wooden box covering a statue of George Washington at an NAACP event.
Rating:

On 13 January 2011, the South Carolina State Conference of the NAACP sponsored "King Day at the Dome," an observance of Martin Luther King, Jr. Day held on the grounds of the state capitol in Columbia.

Photographs of the event show a State House statue of George Washington shielded from view by a structure extending around the front and sides of the statue, a phenomenon which led to claims that the NAACP had deliberately chosen to shield the statue of the first U.S. president from view "so that participants would not be offended by his presence" (because the labor at Washington's Mount Vernon estate was largely provided by slaves):

The annual MLK observance at the state house in Columbia SC had an interesting twist this year. The event is held on the north side steps of the statehouse. Prominent at that location is a large bronze statue of George Washington. This year, the NAACP constructed a "box" to conceal the Father of His Country from view so that participants would not be offended by his presence. The structure around the statue was of a type that the NAACP had been using at such rallies for the previous several years, and South Carolina NAACP executive director Dwight James maintained that its purpose was not to obscure the statue from view, as he explained to South Carolina news outlet The State:

A three-sided structure that covered the front and sides of the statue was intended to display a rally graphic and serve as a photo-and-television backdrop for the event's speakers. However, the graphic was not finished before the rally and could not be put in place.

Photos from the event showed a three-sided box with Washington's statue visible only from behind the stage. "What we had constructed was a background with a graphic to be placed on it," James said. "We weren't trying to obstruct anything."

King Day organizers have built similar structures around the statue dating back at least to 2007, according to The State newspaper’s archives.

Joanne Jones, vice chairwoman of the Charleston Tea Party board, said she assumes the NAACP was not intentionally disrespecting a founding father. She said the decision was just "surprising," considering how image-conscious the group is. "I would have thought they would have thought it through," she said. "They must not have had any alternative."