According to a viral rumor, a fleshy pit in Texas was shut down in 2007 after hundreds of people mysteriously died. 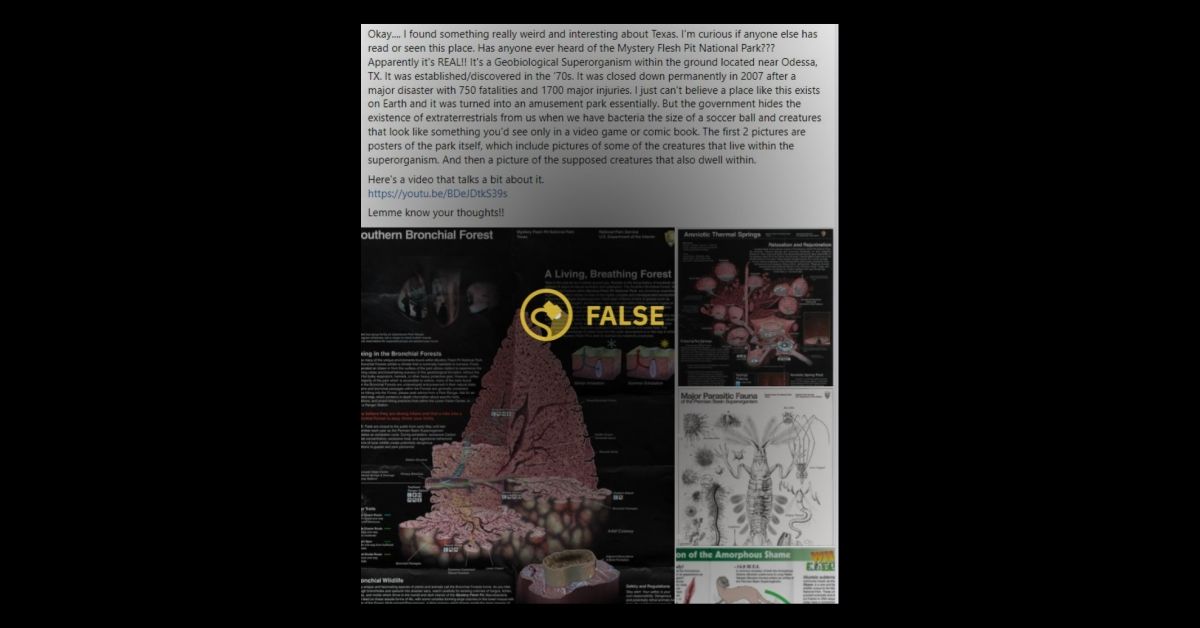 Claim:
The "Mystery Flesh Pit National Park" is a real place that was shut down in 2007 after hundreds of mysterious deaths.
Rating:

At least, that's the rumor on the internet.

In reality, the work of a digital artist and fantasy writer about the fictional habitat for a nonexistent "Geobiological Superorganism" has been shared out-of-context, leaving some unsuspecting social media users curious about the existence (or lack thereof) of this supposed national park. Rumors about this "flesh pit" were also popularized on TikTok:

The Mystery Flesh Pit National Park is not a real place. It was not discovered in the 1970s, it was not the site of a major disaster that claimed hundreds of lives, and it is not the home of a Geobiological Superorganism. The above-displayed story and media was created by artist Trevor Roberts.

Roberts, who goes by the name StrangeVehicles on Reddit, started creating media for Mysterious Flesh Pit National Park circa 2019 in the Worldbuilding subreddit. This subreddit is used by artists, writers, and other content creators to share their fictional worlds. On May 22, 2019, Roberts posted a tourism poster for this fictional park.

Since then, Roberts has created everything from trail signs, to spa brochures, to camping guides, to diagrams of parasitic fauna, in order to make this fictional park feel more like a real place. One of the highlights of Roberts' world building exercise is the "investigation report" into an alleged incident that supposedly claimed the lives of hundreds of people in 2007.

Roberts explains on his website:: "This archive catalogs a series of illustrations and writings by Trevor Roberts, AKA StrangeVehicles. This project started as a worldbuilding exercise originally posted on the r/worldbuilding subreddit on reddit.com, and continues as a for-fun creative outlet that is slowly being fleshed-out (pun intended.)"

I am surprised that some people believe it is real, as that was never the intention. I do try my best to mimic the style of real NPS brochures and materials through layout, typeface selection, color choices, and general wording, but I had imagined that the absurdity of the basic concept would be enough for someone to see that it was all an art project.

When I make new material for the blog, I am continually worrying about being too "on-the-nose" with the tongue-in-cheek humor. Much of the Mystery Flesh Pit project is, at least in the words of others, a very obvious critique of both the oil industry and the nature tourism industry, so if some people are so ready to accept it as fact, maybe that speaks to some aspects about the real world.

Overall I take it as a tremendous compliment that a few people took my art as fact, so long as it didn't cause any genuine discomfort or anxiety.

While Mystery Flesh Pit National Park was never a real place you could visit, some may still find that this fictional park is worth exploring. You can visit the archives of this strange, deadly, and totally fictional place here or support Roberts' artwork via his Patreon page here.